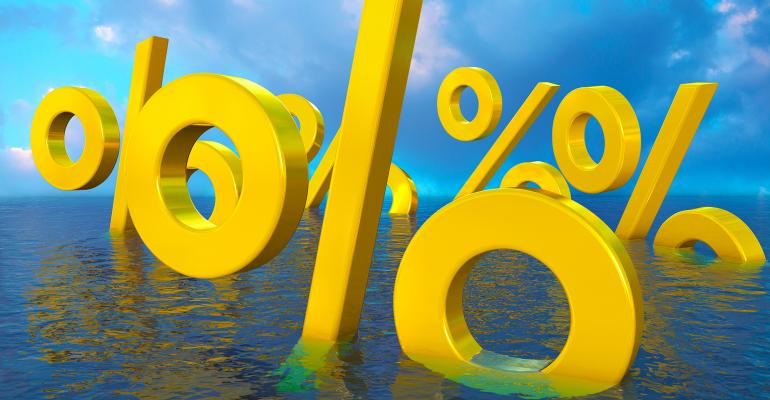 The 30-year U.S. real yield has been negative since mid-June after never falling below zero at any point since at least 2004.

(Bloomberg Opinion)—Defined-benefit pension plans were already barely treading water heading into 2020. In the years ahead, the risk is as great as ever that a large swath of them will drown.

As the name implies, defined-benefit pensions promise to pay a set amount to retirees. While corporate America has largely moved away from this structure in favor of 401(k) options (or “defined contribution” plans), virtually all state and local governments still offer these reliable retirement payouts. And they’ve been falling behind in a big way: In the 2019 fiscal year, states had $1.48 trillion in unfunded pension liabilities, while the 50 largest local governments faced $478 billion in adjusted net pension liabilities, according to calculations from Moody’s Investors Service. The 100 largest corporate defined-benefit plans had a deficit of $285 billion in November, according to Milliman data.

That $2 trillion hole is only going to get deeper as the Federal Reserve pledges to keep interest rates near record-low levels for years to come as the U.S. emerges from the Covid-19 pandemic. Moody’s, unlike many states and cities, uses a market-based discount rate to determine the present value of a pension’s future liabilities. The lower the rate, the larger the current value. Analysts expect to apply a 2.7% rate to local governments’ fiscal 2021 reporting, down from 4.14% in fiscal 2018 and about the same as Milliman’s current discount rate for corporate pensions. It will likely cause pension shortfalls “to increase by double-digit percentages” in the next two years, Moody’s says.

As harrowing as that seems, the 2.7% rate is likely to prove higher than anything pension-fund managers can hope to get from low-risk fixed-income assets, especially when adjusted for inflation. The 30-year U.S. real yield has been negative since mid-June after never falling below zero at any point since at least 2004. That means even if pensions buy huge amounts of the longest-dated Treasuries, it’s nearly impossible for them to fully “immunize” by aligning principal and interest payments with payouts to retirees such that the value of its assets and liabilities rise and fall in tandem.

The only options, then, are to either shovel more money into the plans, take ever-greater risks with the cash promised to public workers or both. Because of Covid-19, many municipalities are strapped and don’t have much in the way of extra funds. And pensions were already big players in alternative strategies like hedge funds and private equity, yet still fell behind in the decade after the global financial crisis as they assumed annual returns in the ballpark of 7%.

Ultralow interest rates can clearly help jump-start economic activity. Less-onerous mortgage rates open up homeownership to a larger share of Americans. Creditworthy companies can borrow cheaply for research, for new capital projects or, in the case of 2020, to avoid widespread layoffs. The Fed, meanwhile, hopes that by keeping its short-term rate near zero until inflation overshoots its 2% target for an extended period of time, it will one day be able to conduct monetary policy further away from zero than it has in the past 12 years.

Until that day arrives, however, the plight of pension funds — and particularly public pensions — is only going to worsen. It’s one thing for the central bank to strong-arm wealthy individuals or multibillion-dollar endowments out of Treasuries and into riskier assets to earn a positive return. It’s quite another to jeopardize the system that has for decades ensured that teachers, police officers and firefighters are positioned for retirement.

“The prospect of an extended period of negative real rates makes it’s very difficult for the defined-benefit pension plans and insurance companies that depend on some level of relatively low risk return,” John Hollyer, global head of fixed income at Vanguard Group Inc., said in an interview. He expects negative real rates to last for a few years. “One of the unintended consequences could be that sponsors of defined-benefit pension plans wind up having to make larger contributions to those plans to meet their obligations, and also restructure the plans over time.”

At BlackRock Inc., they’re calling this period the “new nominal.” It’s an era defined by stronger near-term growth and eventually higher inflation but without the usual increase in bond yields. “Central banks appear committed to limit any rises in nominal yields even as inflation picks up,” according to the BlackRock Investment Institute’s 2021 global outlook. “Investors will need a new playbook to navigate this. We underweight government bonds and maintain a higher strategic allocation to equities than in typical periods of rising inflation.”

To Hollyer at Vanguard, this raises the risk of asset bubbles that the Fed might struggle to contain. By describing the set of conditions it would take to begin paring back asset purchases, and then to raise interest rates, the central bank is left mostly powerless to push back on some of the easiest financial conditions on record. In a somewhat unusual move, Fed Chair Jerome Powell at his Dec. 16 press conference seemed to try to justify all-time high stock prices by noting that the 10-year Treasury yield was historically low and is expected to stay that way.

“I get that you have to be patient, but at some point the central banks do realize they have to restore government bond yields to a rational, positive level of real yield,” said Bob Michele, global head of fixed income at J.P. Morgan Asset Management. “Insurance companies and pension funds, you’ve removed the ability for them to de-risk, and you’ve also inflated their liabilities. At this level of bond yields, they’ll never be able to generate the 7% return on an ongoing basis that they need. They can absorb it over the short term, but longer term, it’s a reason to raise rates.”

In July, when 30-year Treasury yields were around 1.3%, Bank of America Corp. strategists warned that pension managers would revolt and stay away from the world’s biggest bond market until yields increased by “at least” 50 basis points. Otherwise, adding Treasuries would only “lock in such large funding gaps and also lock in low rates of return on the bonds.” Five months later, the long bond hasn’t yet reached 1.8%, while the benchmark 10-year yield remains stubbornly below 1%.

While investors refuse to sell Treasuries, they’re also not keen on shedding stocks, either. The S&P 500 Index has moved in an almost linear fashion higher since the worst of the coronavirus pandemic in March and April. It got to the point where I wrote that Chicago should be cheering on September’s decline in U.S. technology stocks so its underfunded pensions could buy the dip, potentially by issuing bonds to raise the funds. That drop didn’t last long.

“A drawdown in the market is a good thing,” said Nick Maroutsos, head of global bonds at Janus Henderson Investors. Without that, “it can be a problem because it’s going to hurt earnings, it’s going to hurt return expectations and just overall returns for future generations. And the lessons it teaches — any sort of selloff, you just buy it, knowing full well that defaults will be limited, money will be provided, liquidity will be there.”

Now, pensions are left with little choice but to risk it all and buy stocks near their all-time highs or give even more money to hedge funds or distressed credit managers. The alternative of adding investment-grade corporate bonds that yield less than 2% is a non-starter, to say nothing of Treasuries.

This is by design. Even if the Fed can’t as easily fire up its credit facilities in 2021, investors know they’re an option during periods of crisis. It’s enough to have potentially changed markets forever. Unfortunately, the central bank’s commitment to ultralow interest rates for years has also put defined-benefit plans on track for significant struggles ahead.