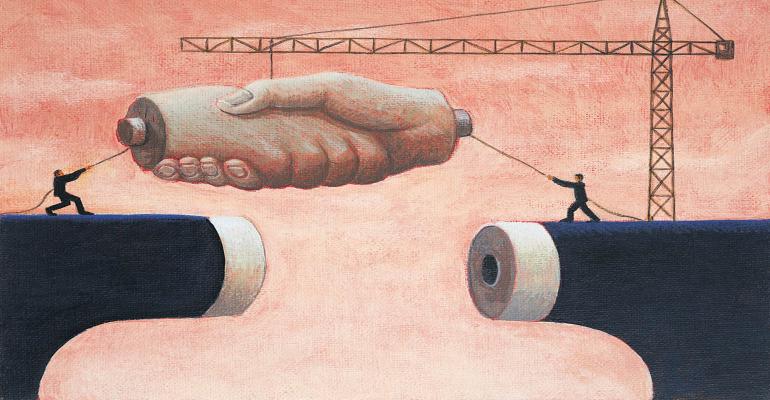 A collapse in deal volume and uncertainty for property fundamentals have created a cloud of confusion about commercial real estate valuations.

Many commercial real estate investors are itching to get deals in motion again. The relaxation of stay-at-home orders to varying degrees around the country is getting people out of their homes and back to work. But a big problem now is figuring how much a property is worth. The investment sales market is in a “shock and triage” phase, says Jim Costello, a senior vice president at Real Capital Analytics (RCA). People are stopping what they are doing and reassessing current conditions, says Costello.

Commercial real estate values have unquestionably moved down. But it’s impossible to tell how much yet, in part because many fewer properties have changed hands than normal in recent weeks. According to RCA, overall deal volume fell 71 percent year-over-year, to $11.0 billion in April. Hotel sales have nearly ground to a halt, with just four properties trading in the month, according to Costello. According to RCA, the number of monthly deals has fallen at an average clip of 36 percent since January and the 580 transactions in April marked a 61 percent decline from the March number.

On the deals that did happen, prices didn’t move much from where they were pre crisis. But that could be because the only assets that traded were on deals that were already in the works or on stabilized assets. As a result, RCA’s CPPI for U.S. properties actually inched up slightly in April to 142.16, up from 141.44 in March. (100 on RCA’s index is equal to average property prices in December 2006) Meanwhile its Global CPPI dipped a slight 0.2 percent in first quarter compared to fourth quarter and was up 2.3 percent year-over-year.

Most of the weakness that did occur came from declines already underway in the Asia Pacific region. Hong Kong, for example, posted the biggest decline in first quarter at -22.6 percent. Similarly, CoStar is not showing any value declines in its Commercial Sales Repeat Index (CCSRI). In fact, its first quarter sales data showed an increase in weighted values of 2 percent compared to fourth quarter and a 5.9 percent in the 12-month period ending in March 2020.

Some investors are looking to the Green Street CPPI for insights on pricing shifts. Green Street Advisors’ methodology is an appraisal-based index (versus closed sale transactions) that also is heavily weighted on institutional quality properties. Its CPPI for April reports a -9.4 percent decline across all property types, 133.5 down to 120.9. (100 on its index is equal to all property values in mid 2007.)

The biggest declines came on malls and strip retail, at -20 percent and -15 percent, respectively. Those sectors that held up better amid building COVID pressures were industrial, self-storage and healthcare with more modest declines of -5 percent. Green Street also acknowledges that exact numbers of value declines are “debatable” and difficult to calculate in a climate where pending deals have stalled or gone off the tracks all together.

Although a pricing correction is inevitable, most agree that it is too early to gauge how much prices will fall and exactly when prices will reach bottom. Pricing discovery is going to depend on how the pandemic and the recession progresses. In addition, commercial real estate prices typically lag what’s happening in the broader economy.

“What is striking about this downturn is how quickly it is coming about,” says Costello. Economic activity shut down followed by soaring unemployment numbers. “But just because the real economy shuts down quickly, it doesn’t mean that the financial economy and the process that investors go through to price assets will respond as quickly,” he says. According to RCA data, property prices in the last recession did not hit bottom until mid-2010.

The lag in pricing in this cycle will depend in part of the ability for owners to continue to hold onto assets. If someone has to sell, that could lead to some distressed pricing and lead to resetting of expectations, notes Costello. However, the forbearance borrowers have been able to negotiate with lenders also is going to buy some time and create some additional delays in when distressed assets move to the sale market.

Although the industry is grasping for any clues on where prices are at and where they might be headed, most are anticipating significant differences across property types and geographic regions.

“We really run into a problem when we start talking about averages right now, because there is so much variance between property types and between locations, tenants, tenant quality and leases,” says John Chang, senior vice president, research services at Marcus & Millichap Inc. Even within hard hit hotel and retail sectors there is a huge range in performance and value, such as when comparing a resort hotel next to an amusement park in Orlando to an extended stay hotel located next to a hospital, he adds. “So, there is a spectrum and we’re glossing over that spectrum with categories,” he adds.

However, there are some potential clues from the Great Recession. According to CoStar, distressed asset sales accounted for about 30 percent of transaction volume during the last recession, and CoStar expects similar numbers of 25 percent to 30 percent in the current downturn. In the last recession, the median cap rates on apartments increased from roughly 6 percent to 7 percent. Retail rose from 7 to 8 percent, and industrial jumped from 7 to 9 percent. Office transactions dried up significantly for two years, which created a hole in pricing data.

“We’re expecting cap rate increases due to distressed sales, which is going to make pricing discovery really difficult,” says Joseph Biasi, a consultant at CoStar Portfolio Strategy. Hotels and retail are expected to take the biggest hit this cycle. In addition, the crisis is going to exacerbate weakness that was occurring before COVID in areas such as Class B and C malls, as well energy markets such as Houston and Oklahoma City, he adds.

Transaction volume has dropped sharply due to uncertainty in pricing, which ironically, is further contributing to the problem of accurately gauging market pricing. “When there is uncertainty, people step to the sidelines, and many people have done that,” says Chang. That caution is significantly shrinking the pool of potential bidders for sale properties. At the same time, there are many others that are waiting for opportunities to be discounted or distressed assets, and it is still early for those distressed assets to hit the market.

It also is important to note that while transaction volume is down significantly, sales are still taking place. In some cases, properties need to sell as a result of a death or break-up of a partnership. In other cases, owners are making strategic decisions to sell, such as selling a good quality industrial asset and using that sale to create a capital reserve to support other assets in the portfolio. “The perception that the entire market is seizing up or all property types are being adversely affected is creating more uncertainty and causing more people to pull back and be cautious,” says Chang. However, there are sectors that are holding up relatively well in terms of rent collections and performance, such as self-storage and some areas of industrial, he adds.

Although there are a lot of people looked at the past recession for potential clues on how property pricing might be impacted, the COVID crisis is different in many ways. On one hand, the government has provided more stimulus and the banking sector is backed up by Federal Reserve policy. On the other hand, there is still uncertainty on the spread of the virus that is impacting the economy and limiting travel.

“We have some concern about credit availability, but in 2008 you could still go to a sale property and view it. Today, that is very difficult,” says Biasi. So, in the short term there are very different barriers to complete transactions, which could further weigh on the bidder pool and transaction volume, he adds.