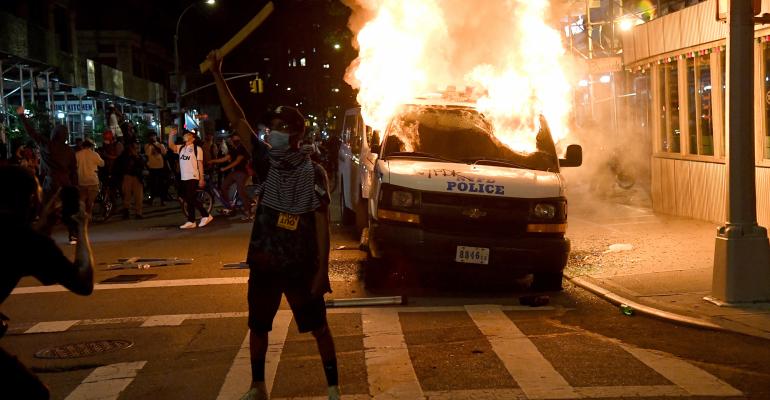 The scenes of burning cars, looting, and violent arrests by baton-wielding police could reverse gains that business owners were making to lure back customers.

(Bloomberg) -- The reopening of America was always going to be fraught, with competing fears of new virus outbreaks and economic meltdown. Now cities across the nation, from New York to Chicago to Los Angeles, are reeling from unrest that could worsen both.

Violence erupted in dozens of cities following the death of George Floyd, a black Minneapolis man who died after a white police officer pressed a knee into his neck for more than eight minutes. Some demonstrators broke off to rampage through shopping districts, including Rodeo Drive in Beverly Hills and Michigan Avenue in Chicago, and set fire to police cars and municipal buildings.

The chaos, amid otherwise peaceful protests, struck as the economy struggles to emerge from its coronavirus-enforced hibernation. After the Covid-19 deaths of more than 104,000 Americans, unprecedented government intervention and massive disruptions to business and everyday life, the scenes of unrest were a bleak contrast to the recent optimism of the markets. A 36% rally in the S&P 500 since March has pushed valuations to the highest in 20 years.

“I think people are coming to the realization that their jobs may not be coming back or coming back quickly. This is all conflating with the racial tensions and completely boiling over,” said Mark Zandi, chief economist at Moody’s Analytics. “This highlights the depth of despair in America,” he added, citing 20% unemployment and 50 million workers who’ve lost their jobs or had pay cuts.

Graffiti criticizing police and income disparity line buildings along Rodeo Drive in Beverly Hills, California — an enclave for the wealthy elite in LA — amid ongoing protests against police violence in the U.S. @NewsyNick reports pic.twitter.com/5v7a0fpEbB

The violence prompted Amazon.com Inc. to scale back deliveries and shut down delivery stations in a handful of cities including Chicago, Los Angeles and Portland. Target Corp., which had already shuttered 32 stores around its Minneapolis headquarters, said it was closing dozens more around the nation, at least temporarily. Apple Inc. issued a statement saying, “with the health and safety of our teams in mind, we’ve made the decision to keep a number of our stores in the U.S. closed on Sunday.”

The scenes of burning cars, looting, and violent arrests by baton-wielding police could reverse gains that business owners were making to lure back customers already concerned about going out in public.

After spiking in mid-March, the Federal Reserve Bank of Dallas’ new Social Distancing Index, which measures the extent of physical distancing and its relationship to economic activity, had started to decline once U.S. states began lifting restrictions on business and consumer interactions.

“The impact of the riots may be greater on the daily and weekly measures of consumer confidence, which were trending slightly upward since mid-April, but which may now post a pull-back into early June,” said Mike Englund, chief economist at Action Economics, which provides financial-market commentary.

Cities hammered by major budget hits from the pandemic can hardly afford the extra costs of police overtime, security measures and damages from the protests. Even before the demonstrations, the Fed and Trump administration have been under mounting pressure to do more for states and municipalities.

Progressive activists have questioned municipalities’ financial support for police departments as other services are cut.

The unrest cast doubt on the partial reopening of businesses that Chicago planned for Wednesday. Mayor Lori Lightfoot, who imposed a 9 p.m. to 6 a.m. curfew on the city, restricted access to the downtown area to those who work or live there, and essential workers. At Lightfoot’s request, Illinois Governor J.B. Pritzker is sending 375 National Guard soldiers to the city, and all bus and rail service was suspended from 6:30 p.m. Sunday until Monday morning.

Lightfoot said the violence had forced the city to consider postponing the reopening of the businesses, which have been closed for 10 weeks. “To see their hard work and their money and resources literally go up in flame, their property reduced to kindling, that’s heartbreaking,” she said.

About 135 properties in Chicago’s central business district sustained millions of dollars in damages, and that number is expected to rise as more reports come in, said Kimberly Bares, president and chief executive officer of the Magnificent Mile Association. “We were focused on sanitation and cleanliness and creating a safe place for people to come back post Covid-19. Now we have to work on making sure people feel safe anywhere they go.”

Washington D.C. Mayor Muriel Bowser said Sunday she was concerned the protests could spark another increase in coronavirus cases in a city that started the first phase of its reopening on May 29.

“We saw a mass gathering, basically -- we’ve been working hard for the last eight, 10 weeks on not having any mass gatherings,” Bowser said.

New York City Mayor Bill de Blasio raised similar concerns about a possible rise in virus cases because of the proximity of people at protests, which he called “inherently dangerous.” The city still has not met its threshold for available hospital beds to qualify for its scheduled June 8 reopening.

De Blasio said the violence wouldn’t delay the city’s plan to restart its construction, manufacturing, wholesale and curbside retail businesses. But the costs of policing the city during days of protests must be added to a budget already under stress from the lockdown’s economic costs.

The unrest has dented the supply lines feeding the U.S. economy. Amazon delivery drivers in Chicago and Los Angeles received messages Saturday night that said: “If you are currently out delivering packages, stop immediately and return home. If you have not completed your route, please return undelivered packages to the pick-up location whenever you’re able to do so.”

Some of CVS Health Corp.’s stores were damaged in the protests but no employees were hurt, spokesman Mike DeAngelis said in an email. A number of the stores were closed as a result, and some others were temporarily closed as a precaution.

Almost 30 of Rite Aid Corp.’s drugstores were affected by the protests, though no employees were injured, spokesman Brad Ducey said in an email. Walgreens Boots Alliance Corp. spokesman Jim Cohn said some Walgreens stores had been damaged and closed, but he didn’t give a precise number.

The fury over Floyd’s death comes as black Americans are dealing with a disproportionately heavy impact on their health and finances from the virus. In New York City, African-Americans have a higher rate of infection than other races, according to city data. A McKinsey & Co. report found that 39% of jobs held by black Americans are at risk from furloughs or layoffs due to the shutdowns meant to curb the spread of the pandemic.

1am last night in my NYC hood. The demonstrations & even the violence are not just about George Floyd's murder. There are now 40 million unemployed people in the US who are rightly furious: white, brown, black. As I predicted months ago this crisis will lead to riots & violence pic.twitter.com/F1xyuvNxzz

Del Shea Perry, who filed a lawsuit alleging her son died in a Minnesota jail after getting inadequate medical care, spoke at a protest in St. Paul, Minnesota, on Sunday. She said she doesn’t condone the looting, but it reflects building frustration in the community over the deaths of black men like her son and Floyd. “Why must we fight like this to get justice?” she said.

People have stepped in to aid businesses affected by the protests in Minneapolis, with hundreds of residents joining the cleanup effort. More than $800,000 was raised on GoFundMe to help rebuild Scores Sports Bar, which delayed its opening during the pandemic only to be destroyed in the protests.

Many residents on Sunday morning took to the streets to help sweep sidewalks of broken glass from looted businesses.

“So many people have stopped by to buy brooms,” Mike Wiese, manager at Gordon’s Ace Hardware, said. The store’s cash registers were too damaged overnight to do any transactions, so he’s been giving the brooms away and asking people to come back later to pay.

By Sunday afternoon, similar efforts were underway in Los Angeles. Scores of young people, many of whom had been protesting the day before, were cleaning up graffiti and sweeping streets. Many structures, including an iconic tower at the Original Farmers Market in the Fairfax district, had already been painted clean.

Los Angeles hotel owners Peter and Ellen Picataggio boarded up the windows of their Farmer’s Daughter hotel in the Fairfax district before the neighborhood erupted in violence Saturday night with stores looted nearby. Fortunately for the Picataggios, their damage was limited to a stolen fire extinguisher and graffiti tagged on the plywood.

Reservations had just begun to pick up after a lockdown had limited hotel bookings to as few as one or two a night. He thinks the recovery will still come.

“Do I think this will impact it?,” Peter Picataggio said. “No, I think it will be a blip. If it ends here, I don’t think there will be a long term impact.”

Heather Johnson, a buyer for a shoe shop, works with the owner of Shiekh Shoes, a family-owned store that started in the Bay Area. On Saturday, thieves stole all of the merchandise and damaged the fittings on the walls.

“I don’t know how we’re going to bring the store back to life,” she said. “It’s going to be really, really hard.”