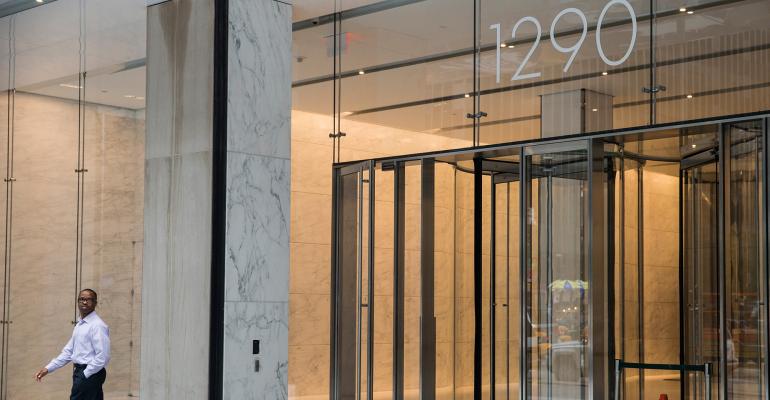 The New York-based REIT is looking to sell two office towers it co-owns with the Trump Organization.

(Bloomberg)—Vornado Realty Trust is exploring the potential sale of two office towers that it co-owns with the Trump Organization, a deal that could be complicated by the president’s ownership and an uncertain commercial real estate market.

The New York-based real estate investment trust is working with brokers to market its 70% interest in the properties, 555 California Street in San Francisco and 1290 Avenue of the Americas in Manhattan. The Trump Organization may also sell its stakes in the buildings, according to to people familiar with the matter who asked not to be identified.

The property in San Francisco could fetch more than $2 billion, according to some of the people.

Vornado said in a statement Tuesday that it was exploring options for recapitalizing the properties, without elaborating on price or whether the president’s company would also sell its stakes. Representatives for Trump declined to comment.

The Trump Organization’s 30% stake in the buildings has been described as passive, meaning the business doesn’t actively oversee the properties. The San Francisco building is home to tenants including Goldman Sachs Group Inc., KKR & Co., Microsoft Corp. and McKinsey & Co.

Neuberger Berman and State Street Bank are among the tenants at 1290 Avenue of the Americas.

Critics have long faulted Trump for his refusal to sell his business when entering the White House. His ownership stakes could make a potential deal harder at a time when investors are struggling to home in on values for office buildings. The pandemic has slowed commercial real estate deals to a trickle and forced many companies to rethink their needs for space.

Vornado’s shares were little changed on Tuesday. The stock has dropped 27% since the beginning of March, with investors concerned that Manhattan offices face a long recovery from the pandemic. The company is spending more than $2 billion to redevelop the area around Pennsylvania Station, hoping to draw tenants to an area that is typically bustling with commuters and tourists.

Vornado, a major New York landlord run by Steven Roth, has a partnership with Trump in the San Francisco and Manhattan buildings as the result of a series of transactions that began years ago. It started when Trump’s majority partners in a residential project in Manhattan’s west side sold the development against Trump’s wishes.

Trump, believing the properties could have fetched more, sued his partners, including investors Henry Cheng and Vincent Lo, who then bought 555 California and 1290 Sixth Avenue. In 2007, while Trump’s lawsuit was ongoing, Vornado bought the investor group’s 70% stake in the office buildings for $1.8 billion.

In 2015, as Salesforce Tower was being constructed nearby, Roth told investors that 555 California was the area’s “dominant building.”

“It has the best roster of financial services tenants of any building anywhere in the United States including in Manhattan,” Roth said.

Trump’s minority stake in the two properties was worth $765 million after accounting for his share of debt in them, according to a Bloomberg Billionaires Index assessment last year.

To contact the reporters on this story: Caleb Melby in New York at [email protected];