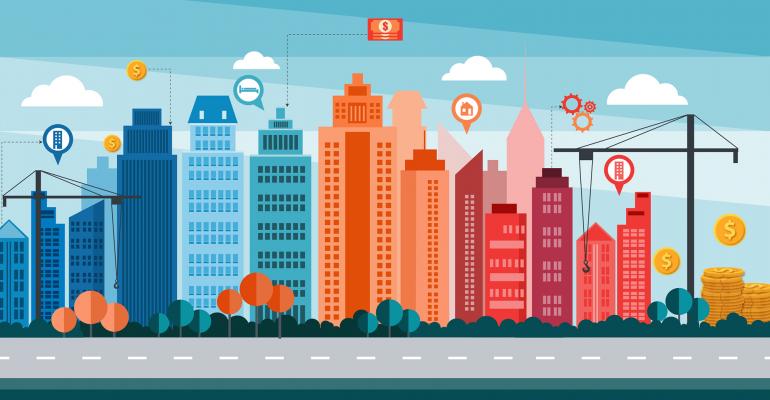 There continues to be a steady flow of capital, although the big banks have tightened their hold on construction loans.

Big banks don’t appear to be loosening the purse strings for construction loans. However, that conservative streak is creating opportunities for regional banks and bridge lenders to pick up the slack.

Some of the usual players in the construction loan market—the large, national banks—are less active due to exposure concerns. “They have made a lot of construction loans through the cycle and to add one more to the queue right now is probably not what they are looking to do,” says Jeff Erxleben, executive vice president and a regional managing director at capital services provider NorthMarq Capital in Dallas.

There continues to be a steady flow of capital, although the big banks have tightened their hold on construction loans and are more keenly focused on serving existing clients. “Financing is available, you just have to fit the box of what a lender is looking for,” adds Erxleben.

Lenders’ appetite for construction loans varies by asset type and geographic market. Industrial remains a strong favorite among lenders. The most noticeable pullback has been for multifamily construction, which is not surprising given the building boom that has occurred in that sector in recent years. According to RealPage, a property management software and services provider, the number of apartments completed in the U.S. last year hit a 30-year high of 395,775 units—more than double the long-term average. Retail has also been more challenged due to the fundamentals in that sector, while office and hotels are getting mixed reviews from lenders.

Last year “was a story on the big bank side of a step back, but not a step out, in construction lending for multifamily,” says Kim Liautaud, managing director and head of U.S. commercial real estate at BMO Harris Bank. “There was a definite retreat on LTCs (loan-to-cost) and advance rates and maybe a slight widening on pricing.” It’s a little early to forecast, but construction lending from the big banks in 2018 is likely to be comparable to last year, she adds.

Other lenders fill the void

Mid-level banks have willingly stepped into the gap created by the big banks. “The smaller local and regional banks continue to be very active, very competitive and more aggressive than the large national banks,” says Liautaud. Although BMO Harris Bank is currently in its quiet period ahead of announcing its financials later this month, the bank remained very active in construction lending in 2017.

In addition, competition in the bridge lending space is pushing some debt funds to expand into construction lending as an alternative to place capital. Primarily, it is those bridge lenders who don’t have to lever their balance sheets that are able to go out and do the construction loans, notes Erxleben. And in most cases, bridge lenders are targeting large, high-profile transactions.

Construction loans from bridge lenders are more expensive that what the banks can do. For example, if a bank can do LIBOR+ 175-250 basis points then a bridge lender will do a loan at about 150 basis points higher than that rate. “I think where bridge lenders can shine in being a competitive alternative is their willingness to look at limiting recourse, which is always a hot button for most borrowers,” says Erxleben.

Bridge lenders are willing to offer higher leverage than the banks at 70 to 78 percent versus banks that would do 60 to 65 percent on a comparable deal. In addition, there are deals where it is difficult to find a single bank source to fully fund a large loan. “Bridge lenders don’t have that problem. They can take down a large deal and you don’t have the syndication risk,” he adds.

Banks are still the lender of choice for most developers. “The issue is that there are a lot of constraints on the banks in terms of the capital they need to put aside for construction loans,” says Joe Franzetti, senior vice president, capital markets, at Berkadia.

The high volatility commercial real estate (HVCRE) rules introduced in 2015 require banks to hold more capital reserves against construction loans. In addition, HVCRE rules include restrictions on how loans are structured and whether or not developers can take out any equity. “Regulators were pretty tough on construction lending, and as a result, the banks sort of picked their spots in terms of what they were willing to lend on and who they were willing to lend to,” says Franzetti.

Last fall, regulators introduced a High Volatility Acquisition, Development and Construction (HVADC) loan proposal that would reduce the capital reserve requirement, but widen the scope of what loans would be considered high volatility. Also last fall, the House passed H.R. 2148, a bill that was supposed to provide more clarity for HVCRE rules. However, it is currently hung up in the Senate. So there is still a tremendous amount of confusion that the banks are dealing with related to the capital charges on construction loans, notes Franzetti.

The regulatory environment around HVCRE or HVADC does cause confusion, and it is still in flux right now, agrees Liautaud. However, she does not believe it has a significant impact on bank construction lending. “It’s a regulatory environment that we have been operating in since the downturn,” she says. “While it is confusing from how to define and plan for, I think most banks have a strategy and are complying with the strategy.”