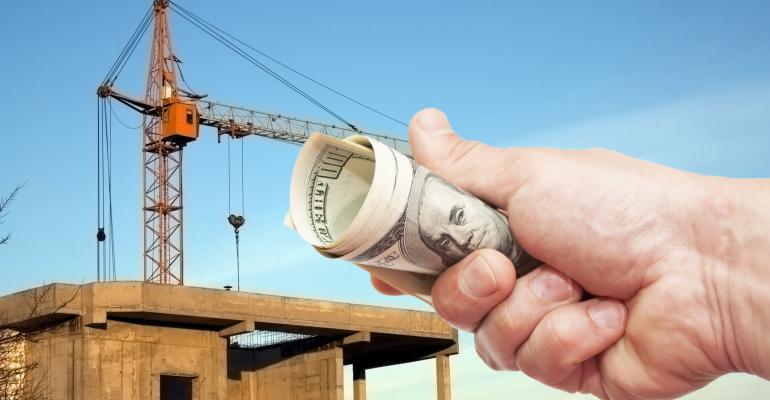 Given the expectation that interest rates will start to move higher, another key selling point these days is the ability to lock in interest rates for both the construction and permanent loan at the same time. “The ability to lock in the rate day one is very attractive and that’s why you do see a lot of folks migrating to that,” says Jeff Erxleben, managing director, production, at debt and equity provider NorthMarq Capital in Dallas. In addition, the pricing differential between conventional bank construction loans and life company construction-to-perm loans has narrowed over the past year, which has made life companies more competitive from a cost perspective, he adds.

Life companies have also introduced some creative underwriting that makes these loans more attractive to borrowers. “It’s not just a fixed-rate bullet anymore,” says Erxleben. Notably, life companies are offering a modified interest rate. The interest rate is locked in on day one, and then if the borrower hits certain hurdles related to the construction schedule and leasing, there is an opportunity to tier down or lower that interest rate, he notes.

Life companies are interested in providing construction-to-perm loans because the product offers a higher yield. However, construction lending continues to be a relatively small portion of life companies’ overall commercial real estate lending. According to the American Council of Life Insurers (ACLI), construction and land development loans on the books totaled $7 billion at the end of 2015 compared to the roughly $400 billion in commercial and multifamily real estate mortgages held by life companies.

There is a small group of life company lenders that are actively lending on construction-to-perm loans, including Northwestern Mutual, Pacific Life and State Farm, among others. “It is not a super deep list of who will do those. But the groups who are there year in and year out have remained active through this cycle and, from everything we can tell, will remain active going forward in 2017,” says Erxleben.

For example, Northwestern Mutual has provided $2 billion in capital for construction-to-perm mortgage loans over the past five years. “We offer borrowers construction/permanent loans that provide the opportunity to lock in place long-term debt, typically 10 years, at a fixed rate for the entire term, including during the construction period,” says Paul Hanson, managing director, real estate production—West, at Northwestern Mutual Investment Management Company, a subsidiary of Northwestern Mutual.

One downside is that most developers need more leverage than what life companies are willing to provide. Although life companies offer similar loan-to-cost amounts when compared to the banks, they tend to value properties more conservatively, which lowers the overall loan amount.

“I would suspect that more of the borrowers using that money are the institutional investors,” says Jake Roberts, senior vice president, capital markets, at brokerage firm Marcus & Millichap. Institutions don’t mind the lower leverage and are more likely to want the permanent loan on the back-end for a long-term hold.

And getting a foot in the door with life company lenders is not easy. Life companies have a reputation for being conservative and tend to prefer working with qualified, experienced sponsors and very stable projects. At the end of the day, life companies do prefer to do business with top tier borrowers, but that can include both large developers and small boutique developers that have a proven track record, notes Erxleben.

Life companies are actively lending on industrial and multifamily development. They will do some retail, such as strong grocery-anchored deals, but are reluctant to invest in office and other types of retail properties unless the assets are significantly pre-leased.

Northwestern Mutual’s construction/permanent loan program is currently focused mainly on apartment projects in primary markets, typically with leverage of up to 60 percent. The life company will also consider pre-leased commercial projects. “While many of our construction/perm loans are made to strong, existing clients, we are eager to develop new relationships as well,” says Hanson.