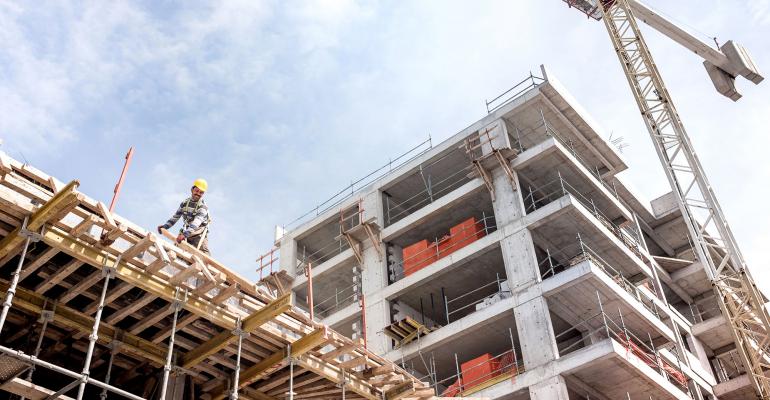 Banks are beginning to be more cautious on speculative construction, but alternative lenders are stepping in.

Developers looking to push forward with speculative office projects at this stage of the cycle are finding that they may have to work harder to find capital—and perhaps pay a little more for it.

Financing on speculative office development has tightened in the past 24 months along with concerns about slowing economic growth and what continues to be stagnant performance across the broader national office market. According to the third quarter briefing from research firm Reis Inc., office vacancies rose by 10 basis points to 16.8 percent during the quarter, which is only 80 basis points below the cyclical peak in 2010.

“Right now, there is a lot of caution in the market, which is good, but it is also coupled with a lot of lender appetite across many different silos of lender types,” says Seth K. Grossman, a senior managing director at Meridian Capital Group in Solana Beach, Calif. Although some lenders have moved to the sidelines, others are not afraid of financing new construction and even speculative construction with little or even no pre-leasing in place.

Lenders are still comfortable with spec office construction risk for a variety of reasons. In part, lending on value-add light and stabilized properties has become so price competitive that there is minimal yield left in it for lenders, notes Grossman. “I think people still feel that while construction has a higher risk component, even on a full construction loan there is typically meaningful cash equity going into the deal ahead of the lender, and developers are usually building to a cap rate on cost that is wider than what you would pay on a stabilized deal,” he says. So, there is some cushion in those deals that is giving lenders a comfort level when dealing with experienced and well-capitalized sponsors, he adds.

At the same time, there is some bifurcation in the market where very strong sponsors who want low leverage are able to go to traditional banks and get cheaper financing, usually with partial or full recourse. On the opposite side, developers that want more aggressive underwriting or higher loan amounts are going to non-recourse lenders and paying a little more for that money, notes Grossman.

Trammell Crow is one of the most active spec developers in the country. Over the past decade, the firm has developed about 53 million sq. ft. of spec industrial space and 8 million sq. ft. of spec office space. “We have certainly seen the environment in which we have been able to finance those properties change quite a bit,” notes Tommy Lee, a principal and head of capital markets at Trammell Crow Co. Although terms on spec industrial construction loans have changed only marginally, financing has tightened noticeably for speculative office developments.

Terms vary depending on the strength of the project, location and sponsor. “Generally speaking, it is very difficult to get great financing for spec office from traditional senior lenders,” says Lee. Those traditional senior lenders, primarily banks, have higher expectations in terms of recourse and pre-leasing requirements, while at the same time have lowered leverage on a loan-to-cost basis. For example, Trammell Crow is now seeing spec leasing requirements from its bank lenders on office projects that range anywhere from 30 to 50 percent, with loan-to-cost amounts between 50 and 60 percent.

Another shift from banks and other recourse lenders is that they are unwilling to accept sponsor underwriting that forecasts rents above current levels being achieved in the market, adds Grossman. Earlier in this cycle, if a developer was building a new best-in-class office building, lenders were willing to accept, on a case-by-case basis, projections of higher than market rents if the anticipation in the market was that rents were going to continue increasing. “So, it has become a little more difficult with the traditional recourse lenders to some degree,” he says.

Non-recourse lenders step into the gap

Even with tightening credit from banks, debt as a product is probably more prevalent right now in capital markets than it has ever been, says Lee. The new competitors that have entered the sector, such as debt funds and other non-bank lenders, are providing good liquidity and giving developers more financing alternatives. “You can get a spec deal financed today. It does need to be appropriately sized and in the appropriate market, but you can find what you’re looking for, it’s just a question of who’s going to be lending you that money,” says Lee.

As recourse lenders have tightened lending requirements, non-recourse lenders have made an effort to be more accommodating—as long as strong risk mitigants remain in place. “Especially in the non-bank world, there is significantly more capital out there willing to finance ground-up, spec construction right now than there was 24, 36 and certainly 60 months ago,” says Grossman.

Yet even among non-bank lenders, financing for spec office projects is very market and location specific. “Really only top downtown locations and very select work-live-play suburban nodes are going to get financing today,” says Dan Levitt, senior vice president of capital markets at Ryan Cos. US Inc. in Minneapolis.

Ryan Co. and Excelsior Group secured a loan from ACORE Capital in early October to finance the construction of 10 West End, a 100 percent speculative class-A office development in suburban Minneapolis. Construction on the 343,000-sq.-ft. project officially began in late October. ACORE Capital is a private capital lender based in Dallas. Although Ryan did not disclose a loan amount, the Commercial Observer reported that the $88.9 million in financing included a senior loan and mezzanine tranche.

Ryan’s track record as a developer, as well as the project’s prime location in the vibrant West End area at the intersection of Interstate 394 and Hwy. 100, also played a key role in attracting lender attention. “If you have something that fits the box that the lenders like, and it’s a really small box, the debt market is pretty efficient,” says Levitt. Developers with strong projects have a pretty wide menu of different lender options and different levers to pull to structure deals depending on factors such as rate, loan-to-cost ratio and amount of recourse, he adds.

Another qualifier for many debt funds is that they only want to do bigger loans. Loans that are sized between $75 million and $200 million hit a real hot spot, notes Grossman. Interest starts to dwindle for loans below $50 million and deals below $15 million are very difficult to finance from non-recourse lenders, he says, unless owners are willing to pay a significant rate premium. Grossman recently closed a non-recourse senior loan on a spec office building in the Arts District of downtown Los Angeles for $52 million.

“Pre-leasing changes everything,” he says. Metrics are still important. However, projects with pre-leasing above 30-50 percent opens the doors to many more capital options, with lenders willing to do deals at different leverage levels.