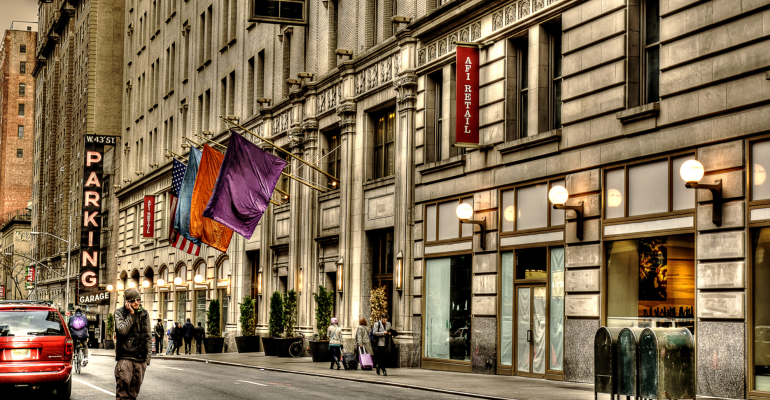 Kushner Cos. will have to renegotiate its $285 million loan after one of the retail tenants broke its lease.

(Bloomberg)—The Kushner family’s big bet on Times Square retail is on the rocks.

A $285 million loan taken out by the Kushner Cos. will require a renegotiation of terms after the firm’s tenants broke their leases, the real estate company said Friday.

The loan was issued by Deutsche Bank AG in 2016 to allow the firm to refinance six floors of retail space in the former New York Times building. Rent income at the property is falling short of interest payments, according to an analyst note this week on behalf of Wells Fargo & Co., which is managing the loan. The loan was being transferred to a so-called special servicer, which typically oversees such deal talks, according to the note.

The loan isn’t in default and hasn’t yet moved to special servicing, Wells Fargo said in a statement.

“Everyone is aware of the fact that the retail environment is very challenged to say the least,” a spokeswoman for Kushner Cos. said. “The main tenants representing a big percentage of the rent roll defaulted on their lease obligations, which necessitates a workout.”

Months of troubles at the building have taken their toll. Kushner has engaged in legal battles with tenants and also issued significant rent reductions. Last month, one of the largest tenants filed for bankruptcy.

Kushner Cos., the family company of presidential son-in-law Jared Kushner, purchased the space at 229 West 43rd Street for $296 million in 2015. A year later, after signing up new tenants, the company received a $470 million appraisal for it, which underpinned a $370 million loan package that also allowed the family company to take out $59 million in cash.

Most of that the loan package -- $285 million -- came from Deutsche Bank, which promptly sold the loan into trusts that hold commercial mortgage debt. Kushner Cos. defaulted on a smaller, high-interest chunk of debt in October, according to the recent analyst note.

Many of the tenants at the tourist-centric property quickly fell on hard times. A planned food hall never opened, and the proprietor and Kushner have traded lawsuits. A National Geographic-themed exhibit sought a rent reduction. Gulliver’s Gate, which displays intricate miniature models of the Colossus of Rhodes, the Empire State Building and Jerusalem’s Western Wall, filed for bankruptcy protection in October after intermittently paying rent.

The troubles mirror an earlier Kushner saga at another Manhattan property, 666 Fifth Avenue, a Midtown office tower. Kushner purchased it for a record-setting $1.8 billion, mostly using debt. Loan payments far surpassed income from tenants, and the deal spurred a decade of pain, including buckets of red ink and a loan restructuring.

Then, as the presidential campaign of Donald Trump took off, members of the Kushner family traveled across the globe looking for a savior, engaging Qatari royals, a Saudi mall developer, a Chinese insurer and investors in Israel and South Korea. The building was eventually sold to Brookfield Asset Management, the Canadian investment firm, last year.

To contact the reporter on this story: Caleb Melby in New York at [email protected].

To contact the editors responsible for this story: Jeffrey D Grocott at [email protected]