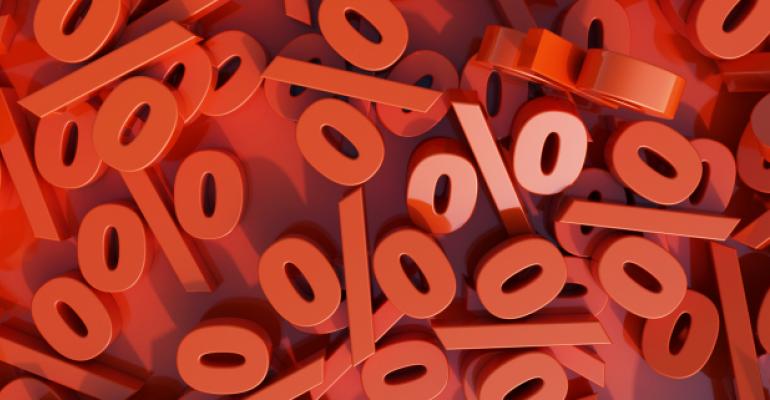 Even more favorable rates have unleashed a fresh wave of refinancing activity in recent months.

Borrowers have been enjoying a low interest rate environment for some time. Yet the further drop in interest rates this year has stoked a surge in refinancing activity.

The Federal Reserve kicked off the first of three rate cuts in late July, which subsequently pulled commercial real estate lending rates lower in the third quarter. Notably, the 10-year Treasury dropped by 50 basis points in August to a near cyclical record low of 1.47 percent. The favorable rates have unleashed a fresh wave of refinancing activity. “You are seeing a lot of borrowers paying off loans early to take advantage of the low rates,” says Peter Norrie, managing director, capital markets, at Cohen Financial in Portland, Ore.

For example, some of the 10-year loans that were done seven years ago were done at 5.5 percent, whereas borrowers now have an opportunity to refinance at sub-4 percent. So, the math on that works very well for some borrowers, even if they have to pay a penalty for an early exit, notes Norrie.

The current refinancing activity is widespread across property types and capital sources. For example, Fitch Ratings noted that the pace of defeasance on CMBS 2.0 loans surged following the July rate cut, with third quarter volume that totaled $3.92 billion. Overall, the 2019 defeasance volume for CMBS 2.0 deals through the third quarter is on par with the full-year 2018 activity at $10.9 billion.

Other data sources show a similar spike in activity. The Mortgage Bankers Association, an industry trade group, reported that the volume of commercial/multifamily mortgage originations in the third quarter jumped 24 percent year-over-year, according to its most recent quarterly survey of commercial/multifamily mortgage originations. Research firm Real Capital Analytics reported an even higher increase on year-to-date refinancing transactions through the first three quarters that was up 63 percent year-over-year.

Lender spreads have moved around a bit this year. For example, there was a window in the third quarter where some uncertainty on reaching lending caps caused Fannie and Freddie to widen spreads in order to slow lending volume. However, agency spreads have narrowed and, along with the Feds’ rate reduction, it remains a very low rate environment, notes Norm Nichols, an executive vice president and national manager of the income property group and community development lending at KeyBank.

KeyBank actively lends in three areas: term debt on stable assets, ground-up construction loans and transitional loans for repositioning or renovation. In particular, KeyBank has seen a dramatic, nearly 100 percent increase in refinancing activity in 2019 on its balance sheet loans for stabilized properties. Although the low rate environment is certainly a contributing factor, the increase is largely due to the bank’s shift in strategy to increase its permanent term lending, adds Nichols.

Across its capital markets platform, Fannie Mae, Freddie Mac, CMBS, and life company placement, KeyBank has seen a noticeable step-up in refinancing activity in 2019, with activity that is about 10 to 20 percent higher compared to 2018. Anecdotally, borrowers sitting on construction loans that were done at higher spreads two to three years ago are refinancing into interim/bridge loans to take advantage of the low rates and get some of their equity investment back. “That’s another scenario where we’re seeing refinance activity driven to a large degree by the interest rate environment,” says Nichols.

Current refinancing deals are offering more than just savings on lower rates. Borrowers are taking advantage of other benefits when refinancing deals. Some are shifting to non-recourse, moving out of short-term floating debt and into longer-term fixed-rate financing, or getting longer interest-only periods, which helps to drive cash flow and returns. “People are definitely looking at all of those issues on refinance options,” says Nichols.

Many owners are also using refinancing as a means to pull equity out of a property in cases where values have increased. That strategy has become a popular alternative to selling assets in the current market, where it has become more challenging to redeploy capital into new real estate investments.

“If you’re sitting on an asset and you don’t intend to sell, then it’s a fantastic time to term out at more attractive financing,” says David Bitner, head of Americas capital markets research at real estate services firm Cushman & Wakefield. Debt markets also appear to be marking properties at higher valuations than an owner could get in the sale market, notes Bitner. “So, there is somewhat of an arbitrage there with a cash-out refi,” he says.

In addition to the low rates, borrowers are continuing to enjoy a highly competitive lending market where lenders are working hard to retain or win refi business with both economic and non-economic terms. “We track the spreads different lenders are charging for different assets, and they have been remarkably steady through all this rate volatility,” says Bitner. “So, no lender rate group felt that they could demand a higher spread even as base rates fell.”

The downside of the recent flurry of activity is that it’s likely pulling some refinance business forward into 2019. Potentially, the loans being refinanced now could result in a thinner pipeline of deals next year. However, it is difficult to say what the net affect might be on origination activity in 2020. Certainly, there are other drivers of demand, such as acquisitions and construction activity, which could remain robust and contribute to strong overall lending volumes in the coming year.