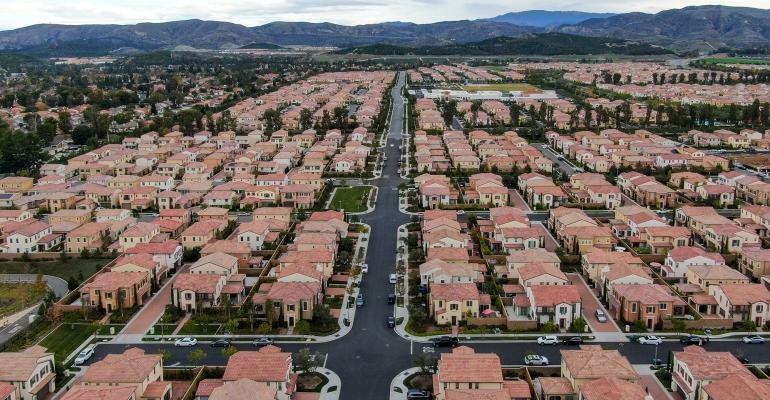 Mortgage Sector Off to Worst Start Since 2013 Despite Fed Help

The year-to-date excess return versus Treasuries for the Bloomberg Barclays U.S. MBS Index stands at -0.31% as of Friday.

(Bloomberg)—Mortgage investors have yet to enjoy robust returns this year despite the Federal Reserve providing $688 billion of support to the sector since mid-March.

The year-to-date excess return versus Treasuries for the Bloomberg Barclays U.S. MBS Index stands at -0.31% as of Friday, the worst seen over a similar period since 2013, which was also a time of central bank mortgage purchases.

After an excess return of +0.48% in April -- with the help of $295 billion in Fed support -- last month’s $101 million in central bank buying was barely enough to fog the performance mirror, resulting in a tepid 0.03% excess return.

Several factors have kept investors wary of the sector.

First off are the surprisingly robust prepayment speed reports over the past two months, which proved that lockdown or not, when it comes to the chance of lowering their monthly mortgage payments (and for lenders to make fees for refinancings) Americans are nothing if not persistent. The April prepayment report saw aggregate conventional Fannie Mae 30-year speeds rise 26%, following the previous month’s 42% increase.

While May prepayment speeds (to be released Thursday afternoon) are expected to drop between 10% to 15%, Nomura MBS analysts wrote in a recent report that they have long-term concerns about “the risk of rising prepayments” with mortgages rates at record lows.

A second factor is the wave of forbearance after recent legislation that allowed homeowners to demand it on easy terms. As of May 17, servicers have seen 8.36% of their loans drop into forbearance, according to the Mortgage Bankers Association.

The question is how many of those loans will eventually default and require buyouts, an event that can hurt mortgage sector performance. Unfortunately, the root cause of the forbearance spike is a lockdown-driven slump in nationwide economic activity -- which is unprecedented and therefore not quantifiable.

Most concerning for valuations is an issue put best by Bank of America in their latest research report. “Our survey responders flag the Fed as the overriding driver of value and risk,” and the risk they’re referring to is “a taper tantrum repeat that looms large beyond 2020.”

The “taper tantrum” was sparked by comments from former Federal Reserve Chairman Ben Bernanke on May 22, 2013 about the potential for reduced central bank support for mortgages. In the two weeks that followed, the mortgage sector’s excess return dropped 0.73%. By July of that year, 30-year mortgage rates had increased to 4.51% from 3.59%.

That reaction highlights that any sector supported by a central bank, by necessity, becomes dependent on that bank’s continued largess to maintain its current valuations. Having benefited from almost $700 billion in Fed credit since mid-March, it’s arguable that mortgage sector performance going forward will depend most heavily on decisions made by the Federal Reserve Board.

Christopher Maloney is a market strategist and former portfolio manager who writes for Bloomberg. The observations he makes are his own and are not intended as investment advice

To contact the reporter on this story: Christopher Maloney in New York at [email protected].

To contact the editors responsible for this story: Nikolaj Gammeltoft at [email protected]