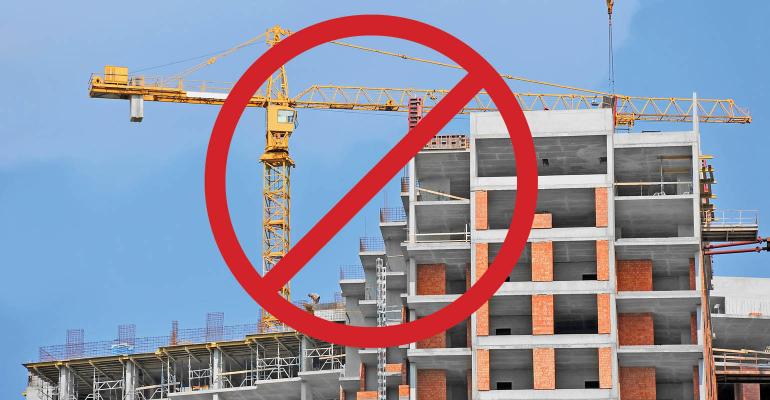 (Bloomberg)—New York City’s construction shutdown has derailed a $66 billion industry, increasing the risk on billions in loans issued to fund projects across the city.

Before the virus outbreak, more than 450 construction projects were underway in New York, where lenders including Wells Fargo & Co. and Deutsche Bank AG, originated roughly $8 billion in construction debt in the past two years, according to Real Capital Analytics In.

For now, work has stopped. That includes construction on new offices for Google in Hudson Square, luxury condos on Billionaires’ Row and a years-in-the-making transformation of the area around Grand Central Terminal.

With non-essential workers ordered to stay at home at least through the end of April, contractors and vendors might not be able to survive. Lenders, meanwhile, are left to wonder whether they’ll get paid as construction deadlines are missed with the city locked down.

And projects still on the drawing board that are looking for funding are probably out of luck for now.

“What’s happening now is many of those are not going to move forward because the lenders are basically saying ‘I don’t know’ about the financial viability,” said Louis Grassi, who runs an accounting firm that works with the construction industry.

Bank of New York Mellon Corp., JPMorgan Chase & Co. and Bank OZK, along with Wells Fargo and Deutsche Bank, were the top five originators of construction loans in New York City in the two years that ended Dec. 31, according to Real Capital. Those loans, or parts of them, may have been subsequently sold to investors.

Bankers acknowledge it’s not a good time to play hardball with borrowers. Lenders underwrite commercial loans using ratios such as loan-to-cost and loan-to-value, which are hard to assess when the economy has stopped.

Projects that have already started construction are at risk of losing financing to fund the rest of their development, according to Jonathan Roth, managing partner at 3650 REIT, a commercial real estate lender. Highly levered lenders may not be able to continue to fund obligations on construction loans, which are typically provided over the course of a project.

If a loan goes out of balance due to delays, the lender may decide to force a capital call or provide some kind of grace period for the borrower, Roth said.

Prior to the pandemic, skyscrapers were being built near Grand Central, including SL Green Realty Corp.’s One Vanderbilt and, a few blocks north, a new headquarters for JPMorgan. Most of the work on those towers has stopped, though public transportation improvements continue.

Transit-related infrastructure projects have been deemed essential under the state’s March 27 shutdown order, as has work on hospitals and affordable housing.

New York’s office market has relied on the expansion of large financial firms and, more recently, technology companies that have looked to tap the region’s workforce.

Projects including the Hudson Yards development and Vornado Realty Trust’s Penn Plaza district had been driving New York’s emergence as a technology hub, but major buildings are not fully leased.

With capital tight and construction delayed, there’s pressure across the industry. A project like One Vanderbilt risks running behind schedule, said Michael Knott, head of U.S. REIT research at Green Street Advisors.

“Everything that’s happening increases risk around every aspect of the project,” he said.

So far in this crisis, New York developers have not been abandoning projects, though that’s happened elsewhere, according to Mark Bergman, a New Jersey-based risk-engineering manager for Zurich North America, which provides construction insurance.

Still, business is frozen. Concrete producers are shut down, materials and equipment are sitting in warehouses and workers are home, joining the millions of Americans who have lost jobs.

This crisis is particularly tricky because of the uncertainty about how long it will last, and what the economy will look on the other side, said Linda Foggie, an executive at the consulting firm Turner & Townsend.

“The hardest part is this is not like a Hurricane Sandy, where it happens and then it’s over so you know you can start planning,” she said. “This affects everyone across the entire breadth of the economy.”