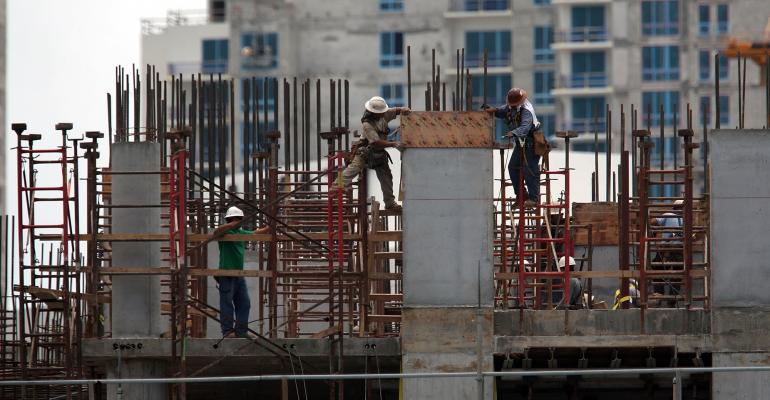 Affordable housing projects continued to move forward in many areas in spite of the COVID-19 pandemic, although some obstacles have emerged.

The crisis caused by the novel coronavirus has not slowed down activity in developing new affordable housing projects. Even in the face of shutdowns that have stopped other activity, developers and investors have continued to work with federal, state and local officials to keep these projects moving forward.

“Affordable housing construction was deemed essential in most jurisdictions,” says Scott Hoekman, president & CEO of Enterprise Housing Credit Investments LLC. Even in the few jurisdictions where workers building affordable housing were ordered home, those job sites have tended to be among the first businesses allowed to re-open.

For example, Enterprise had 117 affordable housing properties under construction when the crisis began. Of those, 79 are proceeding without delay, eight have temporarily stopped construction, 24 have experienced some construction delays and six have the potential for near-term delay.

Patricia Belden, executive vice president of real estate development for The Community Builders (TCB), echoed that sentiment. “In all but one city where we work, construction of affordable housing has continued to move ahead,” Belden says.

These affordable housing developers and investors are taking steps to keep their construction workers safe from infection. Measures have included modified work schedules to have fewer workers on site at one time, more frequent cleanings and other additional measures, Belden says.

Those measures have led to cost increases, but developers say they are essential to ensure safe working environments. In addition, a spread of infection at a worksite would be far more disruptive and dangerous.

“We embraced virus-related construction protocols early in March, and that has helped us avoid setbacks,” says Larry Curtis, president and managing partner of WinnDevelopment, an affordable housing development company.

Another hitch in the current climate, however, is that it is difficult to get a building inspector on site to visit so buildings can get the certificates of occupancy they need to allow residents to move in. “Many cities have stopped construction inspections, causing delays in the construction progress,” Curtis says.

Sometimes—but not always—strong relationships with local officials can help developers gets their projects past that final hurdle to get a certificate of occupancy. “Our pipeline projects have experienced only minor delays,” says Belden. “We are fortunate to work in places where our state and local partners have adapted quickly to our remote and virtual world and have been working hard to keep projects in track.”

Because of the unprecedented circumstances, federal officials have given developers extra to finish their projects. Lenders and equity investors, however, have not been as generous and are typically demanding to by compensated for delays that affect their investments in a project.

“This is on top of delayed leasing, which decreases the expected income from rent,” says Emily Cadik, executive director at the Affordable Housing Tax Credit Coalition.

Most affordable housing developers pay for much of the cost to develop their projects by selling federal low-income housing tax credits (LIHTCs) to investors. Normally these projects need to be completed by a rigid deadline—or else they risk losing the value of their tax credits, according to the rules set for the program by the Internal Revenue Service (IRS).

Fortunately, the IRS gives all projects located in disaster areas 12 extra months to meet their “placed in service” deadline—and every state in the country has been declared a disaster area under the COVID-19 crisis. However, affordable housing pros say the IRS can still do more to recognize the strain the crisis has put on affordable housing projects. “There are about a dozen other deadlines and other flexibilities that we are seeking from the IRS, and hope that they issue housing credit-specific guidance soon,” says Cadik.

Investors, however can still penalize affordable housing developments if projects are late—even if the delays are because of something like COVID-19. LIHTC investors don’t begin to receive the tax credits from a property until it is completed and inspected. If they don’t receive their tax benefits on time, they have the right to claw back some of the equity they put forward for the tax credits.

Many affordable housing projects that receive LIHTCs, get their LIHTCs through low-interest, tax-exempt loan programs typically run by state housing agencies. These 4 percent LIHTCs generate tax benefits for the investors who buy them at a rate that floats based on short-term interest rates—but short-term interest rates have fallen sharply in the crisis caused by the coronavirus.

“The so-called 4 percent rate has fallen to an all-time low of 3.07 percent as a result of the crisis, since the credit rate is tied to federal borrowing rates, which were slashed as part of the economic response to the crisis,” says Cadik.

The sudden change could easily carve a $1 million hole in a project budget. Cadik is personally aware of more than 150 developments planned by members of her organization that have been delayed because of this problem with the 4 percent rate.

“There are certainly many more,” says Cadik. “Without an increase in the credit rate, many properties won’t be able to pencil out.”