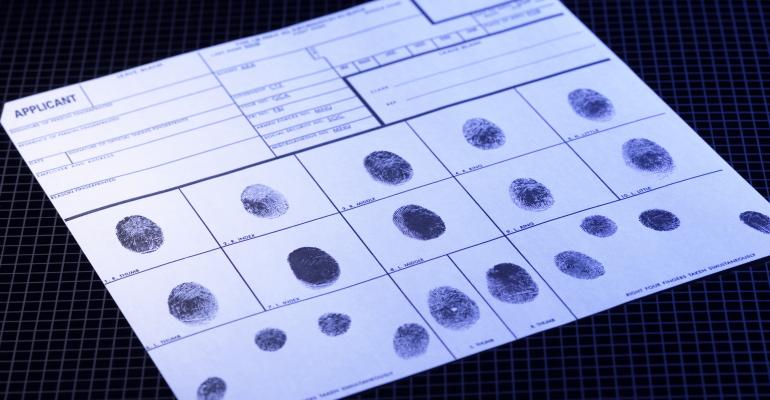 Background Check Policies for Apartment Applicants May Be Illegal

Apartment building managers may be breaking the law if they deny housing to all prospective residents who fail a background check, according to the latest guidance from federal officials.

“A policy or practice that denies housing to anyone with a prior arrest or any kind of criminal conviction cannot be justified,” according to guidance issued April 4 by Helen Kanovsky, general counsel for the U.S. Department of Housing and Urban Development (HUD).

Apartment building owners and managers are scrambling to understand and comply with this latest interpretation of the federal Fair Housing Act, which makes it illegal for housing providers to discriminate against a variety of protected classes of people, including minorities. Many landlords are now uncertain how to balance their responsibility to keep their communities safe with their responsibility under the law not to discriminate.

“HUD has created a tremendous amount of uncertainty with the guidelines,” says Paula Cino, vice president for the National Multifamily Housing Council (NMHC).

For years, federal officials sent a totally different message about criminal background checks. HUD once directed public housing authorities not to rent their subsidized apartments to residents who failed criminal background checks. “Earlier in the 1990s, there was a ‘one-strike, you’re out’ policy,” says Elayne Weiss, policy analyst for the National Low Income Housing Coalition. “These new policies are a bit of a revision.”

However, new realities forced federal officials to reassess. Nearly one-third of the U.S. population, or as many as 100 million people, now have some kind of criminal record, according to the U.S. Department of Justice. Every year, hundreds of thousands of people are released from jails and prisons having served their time. At the same time, technology is making background checks more common for prospective residents.

“Research shows that people who come out of prison and can’t find housing often become homeless, have high rates of recidivism and often end up back in prison,” says Weiss. “Their not having housing doesn’t help anyone.”

To make matters worse, many third party background checkers simply provide a “pass” or “fail” result, which the prospective resident is unable to contest, says Weiss. “These background checks can be filled with errors and inaccuracies… and you won’t be able to refute that claim,” she says.

The new guidance from HUD effectively directs property managers to take a closer look at the details of an individual’s criminal history before refusing to rent.

Federal officials recognize that property managers need to provide safe communities. “Ensuring resident safety and protecting property are often considered to be among the fundamental responsibilities of a housing provider,” according to the guidance. “The Act does not prohibit housing providers from appropriately considering criminal history information when making housing decisions.” 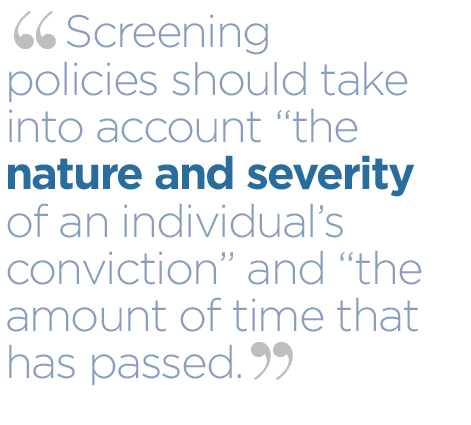 Also the language of the Fair Housing law allows housing providers to exclude individuals convicted of “the manufacture or distribution” of controlled substances.

If resident screening policies over-reach, however, those policies can be judged as discriminatory against minorities, according to HUD. Minorities are more likely to have criminal records. However, that record may not indicate an actual risk to safety or property. For example, arrest records do not constitute proof of past unlawful conduct, according to HUD. Even individuals who have been convicted of crimes may not pose a significant risk compared to average residents.

Screening policies should take into account “the nature and severity of an individual’s conviction” and “the amount of time that has passed,” according to HUD.

However, whatever policy housing providers decide on, they should avoid making judgements that are not based on objective criteria. “That could expose property owners and managers to a greater number of intentional discrimination claims,” syas NMHC’s Cino.

For example, if a housing provider rejects a Hispanic applicant based on his criminal record, but admits a non-Hispanic white applicant with a comparable criminal record, that landlord may be guilty of intentional discrimination, according to HUD.

Public housing authorities in cities like New Orleans, Los Angeles and New York City are already working on their new resident screening policies, and may provide a model for how to comply with HUD’s new interpretation of the law. New Orleans has already published a draft of its procedures, which lay out what types of convictions require further review and may cause applicants to be rejected. The draft also describes how a panel created by the housing authority would take into account possible mitigating factors for applicants with criminal histories, like employment, the completion of drug rehab or volunteer work.

“New Orleans just put out a good screening policy… HUD was tweeting about it,” says Weiss. “Right now we are all really trying to understand how this thing will be carried out and enforced.”