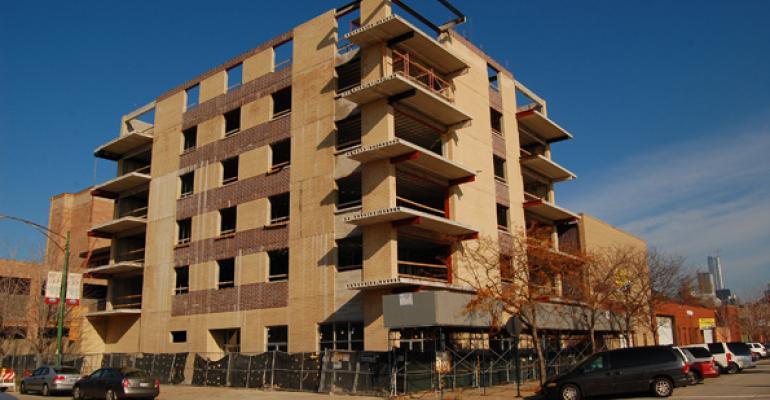 Banks Get More Generous with Construction Loans for New Apartments

Last year, many banks cut back on how much they were willing to lend on new projects.

It’s getting a little easier to find a construction loan to build a new apartment property, compared to the end of 2017.

“Banks are getting more aggressive,” says David Webb, vice chairman of debt and structured finance with CBRE Capital Markets, based in Washington, D.C. “It is getting easier to get deals done.”

Last year, many banks cut back on how much they were willing to lend on new apartment projects. Now, many larger banksare once again taking on new customers for construction loans. The size of these loans remains relatively small compared to the total cost to develop a project—but the loan amounts have stopped shrinking. And other lenders, including private equity debt funds, have rushed in to fill the gap in developers’ budgets with products like mezzanine financing.

Today, apartment developers are able to get non-recourse construction loans that cover 50 percent to 60 percent of the total development cost of an apartment project, according to CBRE. That’s about the same as banks offered earlier this year.

This stability is a big change from last year, when construction loans were getting smaller and smaller, falling from the high point achieved two or three years ago, when the loans typically covered 60 percent to 65 percent of the cost of the project. In 2017, many larger banks had made about as many construction loans as they could fit onto their balance sheets without triggering the new “capital requirement” regulations that force banks to set aside cash of offset certain risks.

Now, several larger banks are once again competing to make construction loans to new developer borrowers. “Banks may be able to say ‘okay’ from a credit perspective, if some of those relatively short-term loans have matured off of their balance sheets,” says Dave Borsos, vice president of capital markets for the National Multifamily Housing Council (NMHC), an industry advocacy group.

“Credit spreads are still on the wider side—no one is getting less than 200 basis points. But spread widening is not getting worse,” says Borsos. The all-in interest rates that banks offer borrowers range from 200 to 350 basis points over the 30-day LIBOR. That’s similar to the rates available last year, though wider than the spreads available in 2016. The benchmark LIBOR interest rate has also gone up over the last two years as the Federal Reserve finally began to raise its key interest rate.

But higher interest rates have not stopped developers from going ahead with new apartment projects. “We still see active pipelines of construction starts. People are still making that part of the transaction work,” says Borsos.

Even if short-term interest rates like the benchmark LIBOR floating rate rose another 150 basis points, developers would probably still be able to make their construction projects work, experts say. And even if developers did begin to struggle, banks could help by lowering their credit spreads. “They still have room for spreads to come in 75 basis points,” says Webb.

"So long as higher interest rates are a function of growth in inflation, then it might spur more construction... Faster growth in rents, property income is growing and developers can get excited about building new assets," says James Costello, senior vice president with New York City-based research firm Real Capital Analytics.