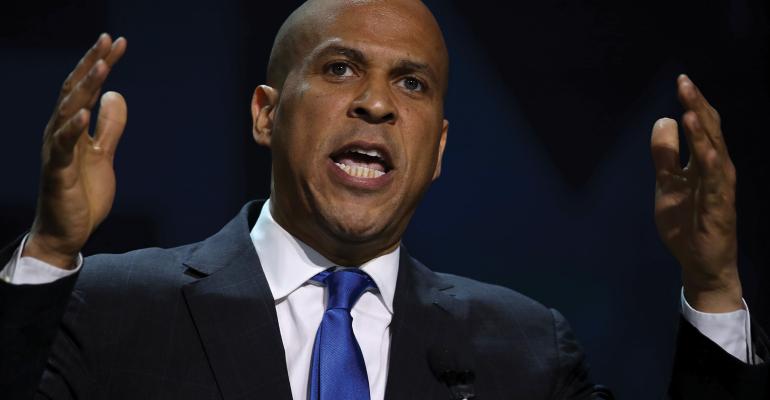 Cory Booker’s proposal is a tax credit for Americans who spend more than 30 percent of their income on rent.

(Bloomberg)—Democratic presidential candidate Cory Booker wants to cut housing costs with a tax credit for Americans who spend more than 30 percent of their income on rent.

“Making sure all Americans have the right to good housing is very personal to me,” Booker said in a statement that accompanied the release of his housing proposals on Wednesday. “I’m determined to tear down the barriers that stand in the way of every American being able to do for their families what my parents did for mine.”

Nearly half of the tenants in the U.S. spend more than 30 percent of their before-tax income on housing expenses. Under Booker’s plan, they would be eligible for a refundable renters’ credit. The amount provided would be worth the difference between the 30 percent of their income and their neighborhood’s fair market rent.

Booker, the junior senator from New Jersey, said the number of affordable living spaces can be increased by paring back zoning rules, building new units for low-income renters and addressing discriminatory and predatory housing practices.

A Columbia University study found that 25,599,000 families would qualify to receive a median credit worth $4,800, according to the Booker campaign. Researchers at the university estimated that 57 million people would benefit from the credit and 9.4 million would be lifted out of poverty.

Booker’s proposal also calls for investments in rural America and on Indian lands in addition to urban areas by “properly” funding the U.S. Department of Agriculture 515 program that provides loans for low-income housing in rural areas and the Housing Preservation and Revitalization program, which finances improvements in existing housing units.

His parents’ struggles with housing discrimination is part of his stump speech. Booker often recounts how his mother and father enlisted the help of a white lawyer and white activists to pose as potential buyers for houses in Harrington Park, New Jersey.

He said that they finally got a house thanks to the U.S. Fair Housing Act, but only after an enraged real estate salesman, realizing he had sold to a black couple, punched his father’s lawyer and sicced a dog on his father.

Booker frequently reminds his audiences on the campaign trail that as the mayor of Newark, he lived in a public housing project.

The part of his plan that would weaken zoning restrictions may run into strong opposition from homeowners and preservationists in well-off urban neighborhoods, where campaigns to kill new construction projects are well known. Many of those same people are Democrats and vote in primaries.

Fellow presidential candidates and senators are pushing housing plans. Senator Kamala Harris of California reintroduced a measure called the Rent Relief Act in April. That would, like Booker’s plan, provide a tax credit to tenants paying more than 30 percent of their income on housing.

Senator Elizabeth Warren of Massachusetts and Senator Kirsten Gillibrand of New York reintroduced the American Housing and Economic Mobility Act in March which would devote federal funds to build homes and make it more difficult for municipalities to block development.

Among Booker’s other proposals would be giving tenants facing eviction the right to legal counsel paid for through a national Eviction Right to Counsel Fund. Newark and New York City already have such funds.