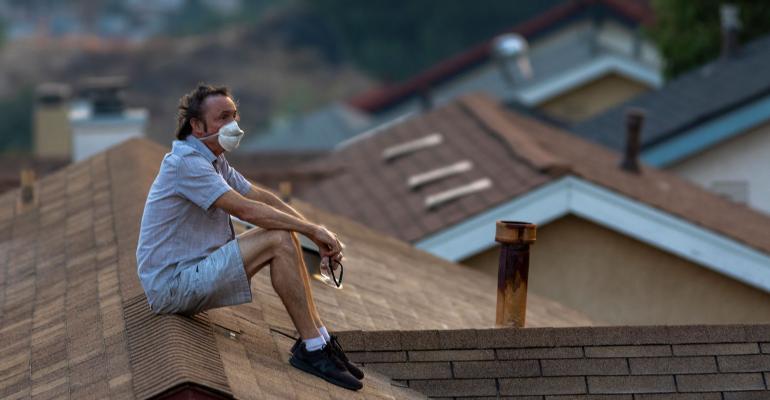 The Centennial project is critical to solving L.A.’s housing shortage, but it’s located in an area deemed a high risk for wildfires.

(Bloomberg)—The Santa Ana winds were blowing as Greg Medeiros ducked behind his Chevy Tahoe on a remote hillside 25 miles from the edge of Los Angeles’s sprawl. He gestured to the valley below, describing his vision of Centennial, the city he’ll build in the heart of wildfire country.

The project is critical to solving L.A.’s housing shortage, with homes planned for 57,000. Though the site is an area the state has deemed at high risk of wildfires, defense is built into the design, said Medeiros, vice president of the developer, Tejon Ranch Co.

On one side, the 200-foot-wide California Aqueduct will serve as a moat. The area also will have at least three fire stations and even a herd of cattle for strategic grazing, leaving less grass to burn.

To Chad Hanson, a forest ecologist who cofounded the John Muir Project, an environmental group, Centennial is just the latest example of California’s “hubris” in the face of wildfires that are growing more destructive.

“If you were to create a top 5 list of the absolute dumbest places in the entire state of California to build a new large development, this would be on the list,” said Hanson, who has hiked the area since he was a Boy Scout. “It flies in the face of everything we know about fire science and about how to keep people safe.”

California is on a collision course with climate change. For decades, the state has built ever deeper into its hills, canyons and valleys to provide cheaper housing for residents priced out of the cities. That growth now comes with existential risk. Rising temperatures and more frequent droughts are creating ideal conditions for wildfires, and a growing population outside the urban fringe brings more opportunities for accidental ignitions.

Centennial was first proposed in 2002 as part of the long-envisioned development of Tejon Ranch, a sprawling 270,000-acre property where Old West outlaws, trappers and frontiersman once roamed on horseback. It’s now home to pistachio and almond farms, hunting grounds, oil and gas mining and sites for three master-planned communities.

Last December, the Los Angeles Board of Supervisors opened its meeting with a prayer led by the county fire department chaplain, for the victims of the previous month’s Woolsey Fire—the largest ever to hit the county. The blaze killed three people, burned almost 100,000 acres and 1,600 buildings, and forced the evacuation of more than 250,000 residents.

After the invocation, the board moved on to the main item of business: a public hearing to approve construction of Centennial—19,333 units, with almost 3,500 designated affordable. The county’s fire chief testified he was “confident and comfortable” with the plan, helping it pass 4-to-1 over the objections of Los Angeles County Supervisor Sheila Kuehl, a former child actress best known for her role in “The Many Loves of Dobie Gillis.”

“It is not a good idea to build a brand new city so far away from everything else because of the fire concern,” Kuehl said during the hearing. “We’re still going to have to defend those houses. We’re not just going to say, ‘Oh well, you built them so they don’t burn so that’s fine.’”

The project is still being challenged in lawsuits by environmental groups, who've cited the wildfire risk as one reason the county shouldn't have approved the development. Tejon Ranch Co. has said the effort is a “blatant attempt to delay” building on the site.

The risks were on full display this fall as California battled major blazes carried by some of the strongest winds in more than a decade. Utilities cut power to millions of customers to reduce the chances of an accidental spark, but hundreds of thousands still had to evacuate, from the Wine Country north of San Francisco to the homes of the stars in the hills above Los Angeles. Even celebrities including Arnold Schwarzenegger and LeBron James had to flee.

The previous two years were the state’s most-destructive wildfire seasons on record, including last year’s blaze that destroyed Paradise, a remote Northern California town in the mountains where 27,000 people fled and more than 80 died.In some ways, Centennial’s remoteness could make it even more dangerous than the areas a few dozen miles to the south—in fast-growing Santa Clarita, the San Fernando Valley and Ventura County—where this year’s fires required residents to evacuate, Hanson said.

But buyers are moving to those areas for the same reason many will pick Centennial: affordability and natural beauty.

Last month, movers unloaded boxes into the garage of Kevin and Adam Ferguson's new home in the Aliento subdivision in Santa Clarita. They worried a little about wildfires, said Kevin, 32. But closer to Los Angeles, they could never afford a single-family home with as much space for his aging parents and the child they hope to adopt.

Jamie Castiel moved three decades ago to Porter Ranch, about 35 miles south of Centennial, and loved the unobstructed views from his backyard over Aliso Canyon. But in October a fire raced all the way up to his home, lighting up a palm tree and raining embers down on his roof. Before he could give it much thought, he grabbed a hose and started dousing the tree and then worked alongside neighbors until 7 a.m. to stave off destruction.

He probably wouldn’t move to Porter Ranch today, but he has a plan for next time.

“I’m going to get a stronger hose,” he said.

Mountain views come with hidden costs. Wildfires put the lives of both homeowners and first responders at risk, while the burden of protection falls on taxpayers who foot the bill for the cost of firefighting and widening highways. A state-regulated insurer of last resort has had to expand as private companies withdraw from risky locations.

In Centennial, many of the market-rate homes will go for less than $500,000, a relative bargain in a state where the median home value is  $605,000, more than twice the national average. They’ll also offer stunning views of the San Gabriel and Tehachapi mountains, and more than 95 miles of hiking trails.

While a growing chorus of climate experts are pushing the idea of managed retreat from flood-prone coastal areas on a mass scale, wildfire migration isn’t an obvious answer for California. For one thing, there are risks in every direction, from earthquakes and drought to rising sea levels. And fires can have unpredictable causes—an unattended campfire, a discarded cigarette, a car that backs into a power line.

“This means that there are more days per year where extreme fire weather conditions could occur,” Bove said. “Additionally, we continue to build and expand into wilderness areas and put more property and lives at risk from wildfires, thus increasing the human impacts from these events.”

The county worked hard to make sure Centennial is as safe as possible, and it’s no different than the many suburban communities that already brush up against the wild lands, said Edel Vizcarra, deputy in charge of planning and public works for Supervisor Kathryn Barger, whose district includes the project.

“If the position is we don’t build in any of those areas, we’re not building new housing,” Vizcarra said. “We are stuck between a rock and a hard place—we have an affordability crisis.”

Caught between constituencies, California’s local and state officials have been reluctant to push for prohibitions on building. But three-quarters of voters support restricting growth in areas that are prone to burn, according to a UC Berkeley Institute of Governmental Studies poll prepared for the Los Angeles Times.

“There’s something that is truly Californian about the wilderness and the wild and pioneering spirit,” he told the Associated Press.

In Southern California alone, the state is now demanding that local governments plan to accommodate 1.3 million new homes through 2029. While coastal communities recently agreed to allow for the bulk of those, hundreds of thousands of homes will still need to be built in inland areas.

One solution would be to allow an abundance of apartment towers to sprout in single-family neighborhoods. But for local politicians, that would bring a firestorm of a different kind as low-rise communities fight to preserve their character.

From the dry chaparral-covered hillsides outside San Diego to Napa, there are dozens of developments being built or rebuilt in places that are bound to burn, said Char Miller, a professor at Pomona College in Claremont, who has studied wildfire risk in the U.S. West.

The need for more affordable housing has created a “social smoke screen” for approving homes in these areas, he said. “This is about the inability of planning and zoning commissions to do their job.”

Ken Pimlott, who recently retired as director of the California Department of Forestry and Fire Protection, said the housing shortage can’t be solved by walling off development. He suggested identifying the few places that really should be off limits, and allow growth elsewhere.

“There may be some areas where we have to flat say, ‘No, it’s not possible to build there,’” Pimlott said. Elsewhere, people should be asking, “Are the access points adequate? Is our infrastructure hardened?”

On the Tejon Ranch in October, Medeiros drove his black SUV into the windswept valley past a field of alfalfa. Centennial, he said, is just delivering on the county’s development plan for the area. When it’s complete, he wouldn’t hesitate to live there himself.

Medeiros bristles at comparisons to Paradise, where residents were caught in gridlock on mountain roads. For Centennnial, the state is considering plans to widen two-lane sections of Highway 138, and residents will have five routes to access it during an emergency escape, he said.

Medeiros sees the city as a model of resilience, no matter what the climate throws at it. To prepare for longer—and more intense—droughts ahead, the site will be able to store enough water to function for 12 years without needing to pipe it in from elsewhere. A weather station will measure conditions that could affect the spread of fires. The power lines will be buried, and homes will have fire-resistant doors, windows and roofs.

“We hear a lot about why it’s not appropriate for growth,” Medeiros said. “But, honestly, I don’t hear the reasons why it shouldn’t be developed.”

Hanson, the forest ecologist, acknowledges that modern homes are safer than they used to be. But even if 5% burn, thousands of lives would be at risk, he said. The development’s three or more fire stations won’t be enough to stop a big blaze, which will require help from outside, he said.

The aqueduct won’t protect the community from embers that can rain down by the thousands, and travel two miles or more, Hanson said. And an escape route—no matter how much it’s widened—is of no use if it’s closed or blocked by 30-foot high flames, he added.

To contact the authors of this story: Prashant Gopal in Boston at [email protected]