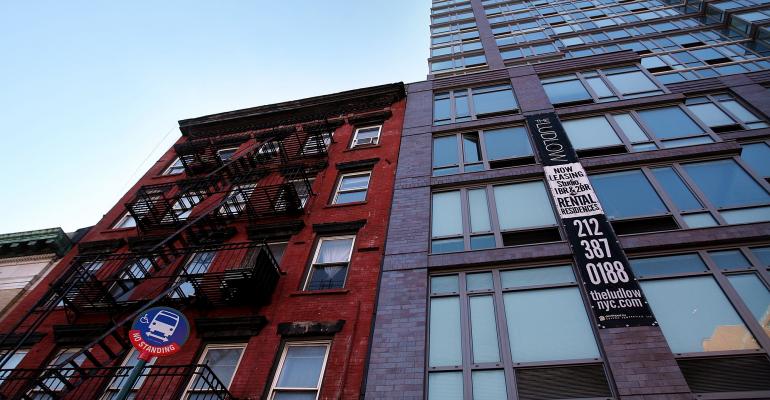 In the last recession some for-sale condo developments were turned into rentals. Brokers say that's unlikely to happen in the current crisis.

Sarah, a prospective buyer whose full name we’ve kept anonymous, hesitated to buy a $1 million home in a new high-rise building in downtown Manhattan, N.Y. On one hand, she loved the condominium. On the other hand, she had never seen it in person. It was at the height of the crisis caused by the spread of COVID-19 in New York City. She also was hesitant to pull the trigger given the broader economic uncertainty.

The owner offered a compromise—Sarah took out a two-year lease that allows her to live in the condominium as a rental apartment, with an option to buy at the end of the term.

“The deal went on during shelter in place. Sight unseen,” says Peter Riolo, a broker with Compass, based in New York City, familiar with the deal.

During the last recession, when home prices fell steeply across the U.S., many developers switched gears to turn whole buildings of built as condominiums into rental apartments to help navigate the downturn. Condominium developers today once again face an economic crisis. Many deals have been delayed for months—if they are able to close at all.

But this time, experts say that deals like that one Sarah completed will be the exception, rather the rule. For one, developers are not able to rent out unsold units in bulk to raise money—construction lenders are unlikely to allow it. In addition, condominium developers are also hesitant to rent out large numbers of condominiums because new laws may make it difficult to get renters out when the sales market improves again.

“I’ve heard of one or two condominium apartments being rented, but not on any kind of wholesale basis,” says Stuart Saft, partner and New York Real Estate Practice Group Leader for Holland & Knight.

The current economic crisis may be worse. The number of people who have filed for unemployment benefits since the crisis began is already several times larger than the millions of people who lost jobs during the last recession.

After a pause in the Spring, officials in many top condominium markets, including New York state, are now allowing real estate transactions to proceed, as the number of new cases of COVID-19 continues to decline and the state gradually re-opens for business. The number of cooperative and condominium apartments listed for sale in New York City in mid-July was up 29 percent from the month before and was roughly the same as it was last year, before the crisis, according to UrbanDigs, a data provider. However, the number of listing in contract to sell was down more than 50 percent compared to the year before. Prices had also fallen by a few percentage points according to the latest figures on closed sales from May—but those deals mostly reflect negotiations that took place before the crisis.

However, thousands of new cases of COVID-19 are likely to weigh on the economy in Miami in the coming months. Developers in condominium markets across the U.S. are likely to have difficulty meeting their pro-forma.

In the last recession many developers offered whole buildings of new condominiums as rental apartments. That is unlikely to happen this time.

In the last recession, condominium projects that ran into trouble were also responsible to their construction lenders, which were typically led by federally-regulated commercial banks that are required to hold extra capital in reserve to offset risky investments, such as condominium construction loans that have recently missed payments. To avoid this, banks were eager to make sure that the condominium developments they lent money to kept producing income, even if that meant offering unsold, luxury condominiums as rental apartments.

The latest generation of condominium projects often received financing from two or more lenders, including a mezzanine lender that will be first in line to take possession of the property in case of a default, according to Saft. However, mezzanine lenders don’t have a motivation to make sure a condominium property continues to pay regular debt service, as long the investment returns its promised yield eventually.

Also, since the last recession, several cities including New York City have toughened their rent regulations, including rules that protect renters from eviction. In New York City, these rules are tough enough so that renters could potentially demand the right to stay and continue renting.

“The law now is so tenant-favored that the lenders are concerned that they will ever be able to get the tenants out,” says Saft.