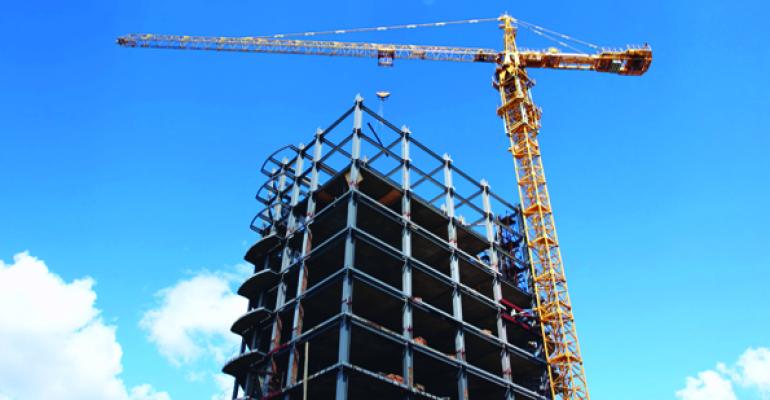 With a few exceptions, apartment developers shouldn’t worry too much about the building cranes looming over hot apartment markets—overall supply is in line with demand for rental housing, according to “The State of the Nation’s Housing 2013,” a report released by the Joint Center for Housing.

“So far, the indicators point to a healthy recovery,” according to the report. The Joint Center’s deep dive into recent housing data was full of good news this year—particularly for apartment experts. Demand for apartments is likely to continue to be strong and healing for-sale markets pose little threat to multifamily, according to the report. However, weak income growth will continue to put pressure on rental housing residents. And a handful of markets face some risk of oversupply.

A recent boom in apartment construction has begun to worry some apartment managers. How long can the good times of low vacancy rates and high rent growth last? “The sharp rebound has raised concerns that developers may be overshooting demand,” according to the report.

Developers have finally begun to build new multifamily housing at rates comparable to the rate of new construction before the crash, in response to the healing housing markets and the strengthening overall economy. In 2012, multifamily starts jumped 37.7 percent in 2012 to 245,300 units. Construction has risen again so far this year.  “It has crossed the 300,000-unit-a-year mark,” says Bob Denk, senior economist for the National Association of Home Builders.

Even more construction is coming. In 34 of the 100 largest metro areas, developers took out more permits in 2012 to build apartments than the average level in the 2000s. Activity in Austin, Texas; Raleigh, N.C., and Bridgeport, Conn., approached all-time highs, according to the report. “In some markets—the D.C. area, some North Carolina markets—the stuff already in the pipeline might take a little bit of time to be absorbed,” warned Mark Obrinsky, vice president of research and chief economist for the National Multi Housing Council.

But overall, the high level of construction is simply making up for lost time. “Given the low permitting levels in 2008 and 2009, the recent outsized increases in top markets put total permitting in the past five years in line with historical averages,” according to the report.

The demand for apartments is strong enough to absorb this supply, according to the report. The number of U.S. households grew by 980,000 in 2012—up sharply from growth averaging 600,000-per-year over the last five years. The growing number of adults in the U.S., including the number of young people graduating from college, should support the creation of about 1.2 million new households a year for the rest of the decade, according to the report.

The growing demand for for-sale homes does not have to bite into the demand for rental apartments, according to the experts at Harvard.

Demand for rental housing spiked upwards as the for-sale housing market collapsed. Foreclosures threw millions of households out of their homes. Falling prices scared off potential homebuyers. As the homeownership rate declined, the number of renter households grew sharply—by more than a million in 2012 alone.

Some apartment experts worry that if homeownership rates rise again, for-sale housing will begin to lure renters out of their apartments. The report tries to calm this worry by pointing out a large, flexible stock of housing that can help absorb the change of changing demand. Between 2007 and 2011, a net 2.4 million homes switched from being occupied by owners to being occupied by renters. That’s several times more than the 900,000 new rental units started during this period.

This flexible housing stock is likely to turn back into owner-occupied housing if demand switches back to homeownership. So a big change in the balance of demand will probably be accompanied by a big drop in the rental housing stock. “Each uptick in prices provides investors in single-family rentals an incentive to switch the properties to the for-sale market,” according to the report.

Rental housing markets are challenged, however, by slow income growth that weakens the ability of renter household to pay for rising rents. “Median asking rents in the report are the highest in history, but the number of households with housing burdens is also the highest in history,” says Debra Still, chair of the Mortgage Bankers Association. At last count in 2011, over 40 million households paid more than 30 percent of their incomes for housing. That includes 20.6 million households that paid more than half of their incomes for housing.

The problem could get worse. “The future of housing demand is largely driven by Echo Boomers, with a large minority component,” says Still. “That will come in at the low end of the income spectrum.” Public policy, including the activities of Fannie Mae, Freddie Mac and the Federal Housing Administration, should play a role in financing the construction of housing to meet this demand, she says.

“A critical issue for the rental market going forward is whether other sources of multifamily financing will step up as the GSEs and FHA curtail lending,” according to the report. “It is unclear how well these sources will meet the growing demand for multifamily financing, particularly for the affordable and underserved market segments.”