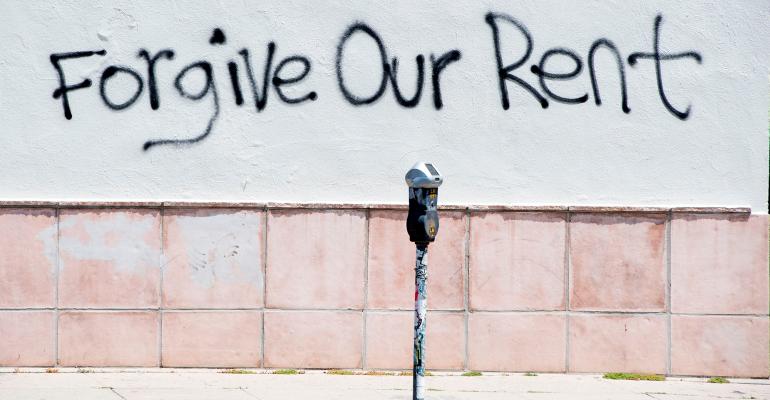 Don’t Let Covid-19 Cause a Surge of Evictions: Editorial Board

The solution, then, is to provide direct federal housing assistance.

(Bloomberg Opinion) -- The coronavirus is putting Americans under severe stress, challenging them to cope with uncertainty, protect themselves and their loved ones, and in many cases just put food on the table. At such a harrowing time, getting thrown out of your home would be an unthinkable hardship. Yet that’s what is likely to happen to millions of renters — particularly people of color — unless Congress finds a solution, soon.

More than 100 million people live in rental housing in the U.S. A disproportionate share of that population consists of Black and Latino families that the pandemic is already hitting hardest in many ways.

Even before the outbreak, these renters were in a fragile position. Nearly half of all households — and a majority of Black and Hispanic ones — were spending more than 30% of their income on rent, the government’s threshold for excessive cost. Federal subsidies, designed to keep housing expenses below that threshold, covered only a small fraction of qualifying families. And instead of addressing the issue, Donald Trump’s administration has been reversing efforts to expand access to affordable housing.

The coronavirus has only made things worse, and the U.S. response is so far inadequate. The CARES Act, passed by Congress in March, offered homeowners as much as six months of forbearance on mortgage payments, but gave renters no similar relief — only a dollop of emergency funding and a temporary moratorium on evictions from federally financed properties. Other moratoriums, imposed by municipalities, are already starting to expire. Meanwhile, more than 21 million people have little or no confidence that they’ll be able to make next month’s rent payment, according to the Census Bureau. That includes about 36% of people in Black households, and 44% in Hispanic or Latino households.

So why not just extend the moratoriums? For one, doing so won’t improve renters’ finances. Unpaid bills will accrue, creating a bigger problem later. Beyond that, most inexpensive rental units belong to smaller individual investors, who often don’t have other sources of income. Driving them into default on their mortgages, or leaving them without the wherewithal to maintain properties, will ultimately hurt everyone by shrinking an already inadequate supply of affordable housing.

Extending enhanced unemployment benefits, which are providing an added $600 per week through July 31, can help keep the problem from getting worse. But it won’t reach many in distress, including those who for various reasons can’t access unemployment insurance.

The solution, then, is to provide direct federal housing assistance. In the context of the vast support Congress has already provided, the cost isn’t out of line: about $12 billion a month if combined with enhanced unemployment benefits, or $16 billion a month without. This money should go primarily toward expanding the existing Housing Choice Voucher program, which — despite some shortcomings — is designed to automatically compensate for renters’ income loss while providing direct payments to landlords.

Unfortunately, the money will take time to reach people, partly because many local housing authorities are ill-equipped to handle a surge in cases. In the meantime, Congress should give states the flexibility to distribute relief funds through whatever channels — including private nonprofits — can get assistance quickly to the people who need it most. It should also protect those who nonetheless face eviction by requiring municipalities receiving federal funds to provide services such as mediation and legal advice.

A wave of evictions would severely deepen a crisis that is already testing the resilience of American society, with unpredictable consequences. At this crucial moment, Congress must do everything possible to keep people in their homes.