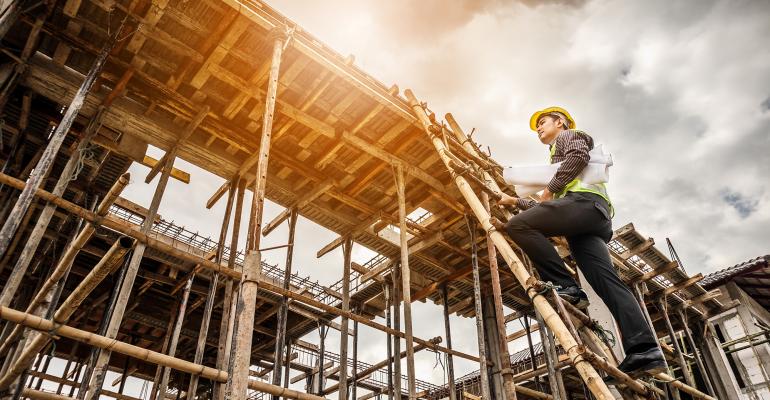 The initial chaos in the housing market caused by the coronavirus pandemic has given way to an eerie calm.

(Bloomberg) -- The U.S. housing market, which seemed headed off a cliff in April, now looks like it’s returning to some semblance of normal. The quiet may not last long.

The initial chaos caused by the coronavirus pandemic has given way to an eerie calm, housing-industry executives say. Unemployment is near record highs, yet home prices keep rising. Lenders that in March warned of imminent collapse are now getting crushed by a surge in mortgage applications. Even some private-mortgage issuers, which don’t have government backing and are typically the most risk-averse in a recession, have come back into the market and say their mortgage-bond offerings have been oversubscribed.

But even amid the welcome surprise, there are signs some homeowners and renters are hanging on by a thread. Many Americans who have lost a job say they’re continuing to make rent or mortgage payments but aren’t certain how long that can last.

“With such elevated levels of unemployment, many households are experiencing very challenging financial distress,” said CoreLogic chief economist Frank Nothaft. “Without some additional program or support, whether at the federal or state level, they will have a lot of difficulty meeting all their payments.”

Much of the initial bleeding was stanched by the $2.2 trillion stimulus package passed by Congress in March. In addition to billions of dollars given to small businesses to maintain payrolls, Congress increased unemployment benefits by $600 per week. The law also allows borrowers with a government-backed mortgage to delay payments for as long as a year if they claim a pandemic-related hardship.

The various programs were more than enough to keep most renters and borrowers on track. Some Americans are receiving more money from federal pandemic payments than they did from their jobs.

Calls to Apprisen, an Ohio-based nonprofit credit counseling service, are down 11% from a year earlier. Financial counselor Sarah Gardner said the weekly $600 pandemic payment made many struggling homeowners ineligible for a federal mortgage-assistance program she used before the pandemic.

But with the $600-per-week set to expire at the end of July, there are signs homeowners and renters could slip.

About 9.1 million borrowers told the Census Bureau in June that they had not made last month’s mortgage payment after their household lost employment income during the pandemic. But 10.7 million said they had slight to no confidence that they’d make their payment next month.

Renters are even more on edge. About one in four rental households that lost income said they missed last month’s rent payment, according to the Census. One in three said they have little to no confidence they’ll pay next month.

Doug Bibby, president of the National Multifamily Housing Council, said he went into April “terrified” of how spiking unemployment would hurt his trade group’s members, which are predominantly apartment-leasing firms. “I was expecting the worst. I really was. We got through April. I thought this can’t keep going in May. The May numbers were better,” he said.

Anecdotally, the group’s members say the enhanced unemployment benefits approved by Congress through July 31 have kept renters paying even if they lost income.

When Congress passed the law allowing mortgage borrowers to skip payments for as long as a year, a mortgage industry trade group predicted as many as one in four loans would enter forbearance programs.

Instead, the forbearance rate has stalled at about 8.7%, according to real-estate data firm Black Knight Inc. What’s more, many borrowers who asked for forbearance have kept making mortgage payments anyway, servicers say.

“It turned out to be a better situation than we all anticipated,” said Bill Banfield, executive vice president of capital markets for Quicken Loans Inc. Banfield said Quicken and other firms have seen upwards of 40% of borrowers in forbearance continue to pay.

At Mr. Cooper Group Inc., one of the nation’s biggest mortgage companies, the daily number of homeowners entering forbearance has fallen by about 90%, and more borrowers are exiting forbearance plans than entering, said Chief Credit Officer Kurt Johnson.

Mat Ishbia, chief executive officer of United Wholesale Mortgage, reckons that low interest rates and pent up demand will fuel an economic comeback, and the next 12 months could mark the best year in the history of U.S. housing. The “great, great majority” of borrowers facing hardship now will soon find their footing and resume paying off their mortgages, he said.

Much of that prediction stems from clear signs that households are getting their finances in order to prepare for the risk of a prolonged recession. They’ve largely shunned additional borrowing and instead have paid down their debt, according to credit bureau TransUnion.

Matt Komos, who leads the company’s U.S. financial services research and consulting, said borrower behavior during the pandemic suggests that even if the economy worsens “they’re going to do whatever they can to keep their homes.”

But there’s concern about what could happen later this year.

Even if borrowers manage to survive the initial shock of enhanced unemployment benefits ending, there could be renewed stress next year.

Unlike a decade ago, when about one in four borrowers owed more on their homes than they were worth, now nearly 97% have equity in their homes, according to CoreLogic. So if they can’t make their mortgage payments, they’re more likely to try to sell their homes than default. If many borrowers try to do that at once when their forbearance ends next year, that could lead to a crush of homes for sale and declining prices, Mr. Cooper’s Johnson said.

Dennis Lee, who analyzes mortgages at Barclays, reckons that 15% to 25% of borrowers in forbearance eventually will default, an estimate he arrived at after studying past episodes of financial distress.

CoreLogic estimates defaults in some mortgages would quadruple by 2022 under its baseline economic scenario, in which unemployment peaks this year at just more than 15%.

Robert Perry, who oversees investment strategy at financial advisory firm ALM First Group LLC, doesn’t think losses will approach the levels of the last financial crisis. Over the past decade, lenders have given mortgages largely to borrowers with sterling credit who could afford hefty down payments, and rising home prices over the last several years has meant record levels of home equity.

About 80% of borrowers postponing their payments have at least 20% equity in their homes, according to Black Knight, giving creditors some comfort that a surge of defaults may not wreck their bottom lines.

Those homeowners who owe about as much as their properties are worth are “the corner of the box everyone has a circle around,” Perry said.