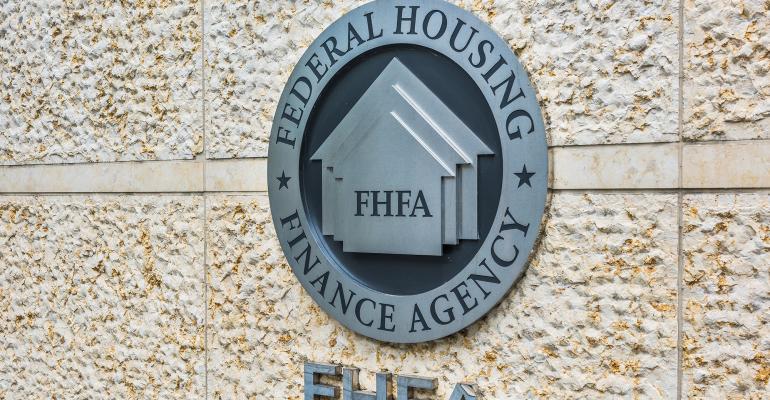 FHFA Continues to Lay Groundwork for GSEs' Exits from Conservatorship

With a backdrop of a volatile political and macroeconomic environment, Fannie Mae and Freddie Mac remain on a path to exit government support.

Despite a pandemic that has unleashed a surge in demand for forbearance requests for mortgages backed by Fannie Mae and Freddie Mac, the Federal Housing Finance Agency (FHFA) is staying the course on its plans to move the two agencies out of conservatorship. Yet keeping the two agencies on track for what combined could be one of the biggest IPOs in history could be a Herculean task in the current economic and political climate.

The privatization of Fannie and Freddie has been a clear priority of current FHFA Director Dr. Mark Calabria since he began serving his five-year term in April 2019. Pre-COVID-19, Calabria had said publicly that he hoped the IPO to recapitalize the two agencies could occur by the end of 2021. The bigger questions are how and when to execute a seamless transition that won’t be disruptive to the nation’s housing finance system.

“There is a consensus in the industry, that at the right time, a move out of conservatorship would be appropriate, but that it should be done in a way that wouldn’t constrain or limit the agencies’ in continuing to support the market,” says Dr. Sam Chandan, Ph.D., the Larry & Klara Silverstein chair in real estate development and investment and dean of the NYU SPS Schack Institute of Real Estate.

Although the FHFA is busy dealing with mortgage forbearance issues, it hasn’t taken its eye off the long-term goal of moving the GSEs down the path towards an exit from conservatorship. In late May, the FHFA re-proposed the Enterprise Regulatory Capital Framework Rule and announced that it is seeking comments over a 60-day period on the rule that would establish a new regulatory capital framework for the agencies. Industry observers agree that the proposed rulemaking is an important step in ending the conservatorships.

The proposed rule announcement was followed by a June 15 update that both Fannie and Freddie had hired financial advisors to assist the agencies to recapitalize and “responsibly end their conservatorships” as outlined in their 2020 FHFA scorecard objectives. Fannie Mae hired Morgan Stanley & Co. Meanwhile, Freddie Mac hired J.P. Morgan as its underwriting financial advisor and also announced that it had hired Christian Lown as its executive vice president and CFO as the company prepares to exit conservatorship.

“I think the big picture here is that Dr. Calabria is being true to his word on his plan and trying to follow what he laid out in marching through those steps,” says Mike Flood, senior vice president of Commercial Real Estate Finance and Member Engagement at the Mortgage Bankers Association (MBA). Yet while the FHFA has the ability to get the GSEs teed up for an exit from conservatorship, there are additional reforms necessary to ensure a fair and equitable system for all before that exit occurs, says Flood. “I think the entire industry would like to see the GSEs reformed in some way, but it depends on where you sit as to how you would like it to be reformed,” he says.

The MBA’s stance is that other reforms need to occur before the GSEs can exit conservatorship. Likely, those measures will require at least some legislative action. In a recent blog article, MBA CEO Bob Broeksmit reiterated some of the chief steps that the association believes need to happen, including:

Discussion of privatizing Fannie and Freddie has been ongoing since the two ended up under government control following a $190 billion government bailout in 2008. Although the mission of the two agencies is to provide liquidity for the nation’s housing finance markets and support affordable housing in particular, both agencies suffered significant losses following the housing bubble and crash of the residential mortgage securities market that resulted in the government takeover.

Some remain skeptical that an exit from conservatorship in the near term is feasible given still sizable near-term obstacles that include a mortgage market still reeling from the effects of COVID-19, a looming presidential election and a formidable partisan divide in Washington.

“Bringing in advisors is a good move, but we are in the midst of a pandemic,” says Willy Walker, chairman and CEO of Walker & Dunlop, a commercial real estate finance firm based in Bethesda, Md. What that means is that there are still a lot of unknowns in how the situation evolves, how the economy recovers and what impact that may have on Fannie and Freddie backed mortgages. According to the MBA, Fannie and Freddie each have a roughly 6.4 percent  share of the 4.2 million single-family mortgages in forbearance. Forbearance requests on the multifamily side have totaled about $10 billion, adds Walker.

There is a lot of debate on whether the recovery will be a slower U-shaped or L-shaped recovery or a rapid V-shaped recovery. “If that V-shaped recovery comes and people are re-employed quickly and the economy picks right back up, the fact that Fannie and Freddie hired advisors is a smart move,” says Walker. “If we stay in a U-shaped or Nike swoosh type of recovery, you are going to have damage in the mortgage markets. It is going to take time for that damage to be cleaned up or moved through the system.” In that case, you could be premature to be talking about the potential IPO of Fannie and Freddie, he adds.

Calabria has the ability as director of the FHFA—an independent regulatory agency—to continue to push forward on the privatization of Fannie and Freddie. However, it also is an election year. Right now, Calabria has the support of Treasury Secretary Steven Mnuchin. If there is a change in the administration that results in a new treasury secretary who may not be as supportive of privatization, it may become a more difficult agenda to advance. “Having a willing treasury secretary is very important to a successful IPO as it results to the backstop of the federal government and any issues as it relates to preferred shares,” says Walker.

There are a number of significant issues facing the country right now in terms of the economy, managing the pandemic and addressing racial equity, adds Chandan. “The primary challenge is that we are operating in a complex political environment. We’re also in an election year, and that introduces the possibility of shifts in policy priorities,” he says. On the other side, one of the notable tailwinds is that there is a lot of important work to do in the housing market and in affordable and workforce housing specifically, he says. “So finding structures that will allow the agencies to help us advance our affordable housing goals is going to be a priority for a lot of people,” he says.