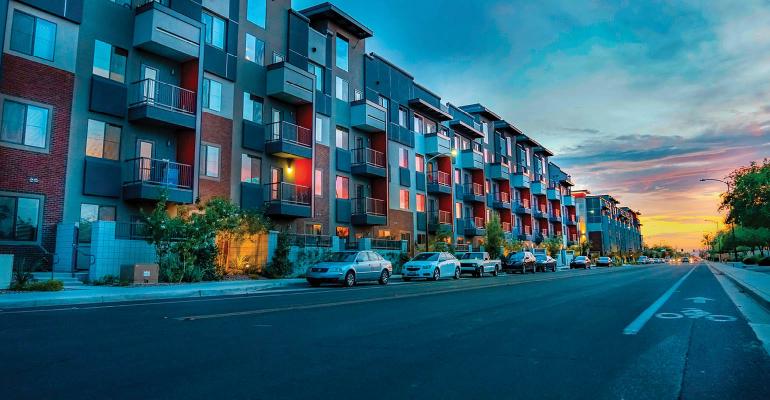 (Bloomberg Opinion)—The U.S. is in the midst of (and may be just passing the peak of) a record-setting large-apartment-building construction boom.

Not a record-setting apartment construction boom, mind you. Apartments — to be more precise, housing units in buildings of five units or more — have, since 2015, been going up at a faster pace than at any time in the 1990s and 2000s, but that pace is still well below the peak rates of the 1970s and 1980s. It is only housing units in buildings of 50 units or more that have been going up faster than ever.

The chart goes back to 1972 because that’s when the Census Bureau started keeping track of the construction of 50-plus-unit buildings; my reading of older housing starts data indicates that 2017 probably marked an all-time U.S. peak (and my reading of newer housing starts data indicates that 2018’s number, due out this summer, will be just slightly lower).

These buildings tend to come in a particular shape: wide, and three to seven stories high. I noticed this when I drove across the country last September and wondered what was up with the boxy-looking new apartment buildings in pretty much every city I visited (even Moscow, Idaho; population: 25,146). I asked about the phenomenon in a Twitter thread that started like this:

That mainly got responses from people saying yes, those are in my city, too! So I started talking to architects and developers, and … the eventual result was a big article in Bloomberg Businessweek on the rise of the mid-rise apartment building, the reasons behind it and some of the potential problems with it. You should read it! But after spending several months learning about these buildings — the best name I’ve seen for them, offered up by a commenter at a Los Angeles real estate site three years ago, is “stumpies” — I also feel qualified to offer a field guide so that you too can identify them in the wild.

Their most important common characteristic, it turns out, is hidden under their skin — in the form of the lightweight wood frame that makes these buildings:

Attractive to developers, because stick construction, as it’s called, is cheaper, quicker and simpler to put up than concrete or steel, and Mid-rise, because U.S. building codes don’t allow stick buildings of more than five stories, although these can be placed atop one or more stories of concrete.

While hidden to the eye except when the buildings are under construction, this wood framing does aid in finding them in government data. Along with tracking multi-unit residential construction by how many units are in a building, the Census Bureau has since 2009 also sorted by framing material. It doesn’t break this down by the size of the building, but by making an assumption about what percentage of units in smaller multi-unit buildings were wood-framed, I was able to come up with this:

For a couple of reasons, these estimates likely underestimate the share of 50-plus-unit buildings with wood frames. This means stumpies probably represent well more than 60 percent of the big apartment buildings that have gone up over the past five years. Interestingly, their market share does seem to have declined in 2016 and 2017. Why? Perhaps because in several expensive West Coast markets, it has started to make economic sense to build concrete and steel high-rises instead.

The threshold, economist Michael Wilkerson of consulting firm ECONorthwest told me, is $3 per square foot: If you can charge more than that in rent, building up starts to pay off. Below that, the wood-framed mid-rise is the practical option. Prospective rents and land costs, along with local parking minimums and other regulations, then determine what kind of wood mid-rise it is.

The simplest and cheapest kind is the all-wood-frame building of three or four stories. A handy taxonomy by civil engineer Lisa Podesto refers to these as “tuck-unders,” meaning there’s a spot for your car tucked under the unit, or “walk-ups,” which can mean either that you walk up the stairs or walk up to the building (many have elevators). Here’s the one that I came across in Moscow, a college-student-targeted complex called Identity (tagline: “Your Identity is waiting”) where you can walk from the nearby University of Idaho campus or park out back.

Where space is at more of a premium, or local ordinances require apartment buildings to provide lots of parking, developers sometimes wrap the building around a concrete parking deck. This is called a “wrap” or, more evocatively, a “Texas doughnut” (parking minimums tend to be high in Texas). From the street they don’t look much different from walk-ups, but if you’re interested, the big architecture firms Humphreys & Partners and KTGY have online portfolios of wrap buildings that they designed.

The defining structure of the wood-framed mid-rise boom is what’s called the podium building. It is sometimes also called a five-over-one — or four-over-one or three-over-one or, since a couple of years ago when building codes started permitting them, a five-over-two. In any case, it consists of several wood-framed stories over a podium of concrete. The podium was originally conceived, most likely in 1960s or 1970s Southern California, as a parking structure. But over time the street-facing parts of podiums have also come to be used for common spaces, retail and restaurants. City planners now often require that space be set aside for the latter two uses, and developers complain that it’s getting increasingly tough to lease all of it. Also, in especially crowded and expensive neighborhoods, the podium may be just the top level of a multistory underground parking garage.

There are two levels of parking below this podium building in Walnut Creek, California, a suburb of San Francisco with high real estate prices and a reasonably lively downtown:

The Lyric, as this apartment complex is called, is covered in fiber-cement siding and stucco. Stucco is the default exterior for these buildings in California, but not so much in many other parts of the country because it doesn’t stand up well to extreme temperature variations. Brick, meanwhile, is big in lots of places in the central and eastern U.S., but not so much in California because bricks aren’t great in earthquakes. Siding and panels made of fiber cement, which is Portland cement mixed with wood pulp and ash or sand, can be found everywhere. And lately metal panels have become a thing, too.

The above building uses both its shape and its exterior cladding to make it look less monotonous and, well, big. Around the corner, interestingly, the Lyric becomes taller and less variegated. As the Walnut Creek Design Review Commission put it in its 2013 approval of the complex, the idea was to “reflect the transition” from the modern office buildings that bordered the other part of the complex to the “more traditional building materials/styles” in the shopping district near this part.

David Senden, a partner at Irvine, California-based KTGY who talked me through a lot of the design considerations that go into these buildings, says this trying-to-fit-in approach may be fading. “We’re seeing bigger gestures now and less of this ‘let’s break it into pieces,’” he says. “Because we’re not gonna fool people anyway.” Here’s what I think is a quite successful example of the bigger-gesture approach, the new Fowler apartments in Boise, Idaho, designed by Holst Architecture of Portland, Oregon.

The Fowler is clad in “iron-washed brick and troweled stucco,” in case you were wondering. Its innards consist of five wood-framed stories over two stories of concrete. The five wood-framed stories indicate that, in building code language, it’s a Type III rather than a Type V. The latter is the building category traditionally devoted to stick construction and is limited to four stories. You can go up to five stories with Type III, which used to be referred to as “ordinary masonry construction” but now simply requires that the exterior walls be made of noncombustible materials. It was architect Tim Smith’s discovery in the early 1990s that fire-retardant-treated wood could be used in the outer frames of such buildings (a story recounted in more detail in the Businessweek article) that led to what was probably the first five-over-one building — Casa Heiwa, an affordable housing complex in Los Angeles’s Little Tokyo neighborhood — which in turn established stick buildings as a viable alternative to high-rises in urban apartment construction.

To achieve densities of 100 units or more per acre, these buildings can’t leave much of the land they’re on uncovered — which, along with a preference for very big projects among the institutional investors who now finance most multifamily developments, results in what Senden and several other people I talked to described as “superblocks.” But there’s a limit to how wide the buildings can be and still have apartments that get enough sunshine to be marketable. As a result, a typical stumpy will meander around in a right-angled U or C or E or S. One fun side effect is that it’s super-easy to identify the buildings from the air.

Casa Heiwa is the building in the middle with lots of green rectangles on the roof. Since its completion in 1996, it has been joined on its block by five other five-over-ones. Going counterclockwise from Casa Heiwa, they are the Teramachi Homes senior condominiums, completed in 2006; the Sakura Crossing apartments (2009); the Wakaba LA apartments (2016); and the two-building Ava Little Tokyo apartment complex (2014). Across the street from the plaza separating the two Ava Little Tokyo buildings is the Stoa, a just completed five-over-two apartment building designed by the very firm that designed Casa Heiwa, Togawa Smith Martin (it’s a long rectangle because it had to be squeezed between a parking deck and a former cathedral).

Anyway, now you know how to find and classify your neighborhood stumpies. I don’t think this is ever going to become a beloved pastime like bird-watching. But hey, people do go on architecture tours.

Justin Fox is a Bloomberg Opinion columnist covering business. He was the editorial director of Harvard Business Review and wrote for Time, Fortune and American Banker. He is the author of “The Myth of the Rational Market.”

To contact the author of this story: Justin Fox at [email protected]