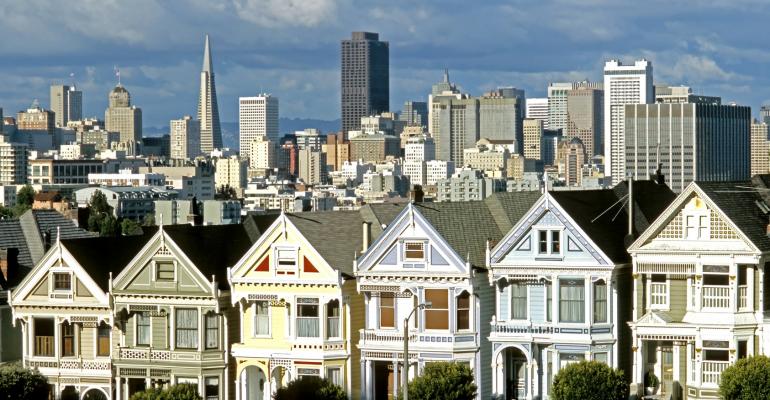 Landing is a new membership-based firm that provides short-term furnished rentals in some of the country’s most expensive cities.

(Bloomberg)—When Bill Smith moved to San Francisco in 2016 to work on his grocery-delivery startup, the most annoying part was finding an apartment.

Poring through rental listings in an unfamiliar city, calling the gas company, waiting for an internet connection -- the entrepreneur had little patience for any of it. So, after Smith sold his company, Shipt, to Target Inc. in 2017 for $550 million, he decided to use some of that cash to do something about it.

In June, using $15 million of his own money, he started Landing, a membership-based firm that provides short-term furnished rentals in some of the country’s most expensive cities. He’s leasing blocs of apartments from landlords including Related Cos. and AvalonBay Communities Inc., filling the units with furniture and dishware, hooking up cable and internet and renting them out at a markup for as little as 30 days.

“Renting needs to change,” Smith, 34, said in an interview. “The whole point of renting is to have freedom and flexibility and the way it is today, you don’t have flexibility because you’re locked into a lease. You have to move all this furniture around and do all this work and you just want to focus on your job and your friends and living your life.”

Smith’s venture joins a growing wave of challenges to the traditional tenets of renting -- a movement that’s questioning why leasing an apartment requires sizable upfront costs and a commitment to stay for a year. Co-living units, where tenants share furnished communal space, are proliferating, as are cheaper alternatives to paying a full month’s security deposit. There are even apartment buildings in which landlords explicitly allow tenants to sublease their units through Airbnb for half the year.

“You sign a 12-month lease, and you get an empty apartment -- that’s been our business model forever,” said Rick Haughey, vice president of industry technology at the National Multifamily Housing Council, a Washington-based landlord advocacy group. “Providing more flexibility than that traditional model is likely to take hold in the future. That is the potential disruptor for our industry.”

So far Smith has signed leases on and furnished about 200 apartments in six cities that include San Francisco, New York, Nashville and his hometown of Birmingham. Tenants pay Landing an annual membership fee of $199, which allows them to sublease any of those apartments for a monthly rental cost that’s about 10% to 13% higher than if they rented a unit directly from the landlord, he said. They can stay indefinitely on a month-to-month basis.

So far, Landing has about 150 dues-paying members, most of whom have signed leases of six months or longer. Moving requires three days’ notice. With a normal lease, it’s typically 30 to 90 days.

Unlike corporate housing, where firms are the clients, Landing deals with individuals, who might be seeking flexibility to move for personal reasons and whose jobs may be portable. Sometimes that move is within the same city, to a neighborhood that is a better fit, he said.

Available units in New York include a 670-square foot one-bedroom unit at AvalonBay’s AVA High Line, being offered at $4,785 a month plus $259 in utilities, according to Landing’s website. Renting an empty one-bedroom in the same building directly from AvalonBay on Dec. 1, would cost $4,447 a month, plus a $2,000 refundable deposit for a 12-month lease, the landlord’s website shows.

Landing is also offering subleases in several buildings owned by Related Cos., including at One Hudson Yards, where the firm is seeking a monthly rent of $6,437, plus utilities.

For Related, Landing is a tenant like any other, signing a standard lease at the advertised price, and subject to the same rules as others who live there, Related spokeswoman Kathleen Corless said. With Manhattan’s vacancy rate at 2%, Related isn’t seeking out these arrangements, but other companies similar to Landing have also leased and subleased units at the firm’s buildings, she said.

As the tenant, Landing handles all interactions with the landlord, offers concierge services and has a team of contract employees who agree to be the buffer for annoying tasks like waiting for a plumber.

“We’re focused on more mobile professionals, and people looking for freedom, flexibility and great experiences-- but they don’t want to be tied down,” he said.