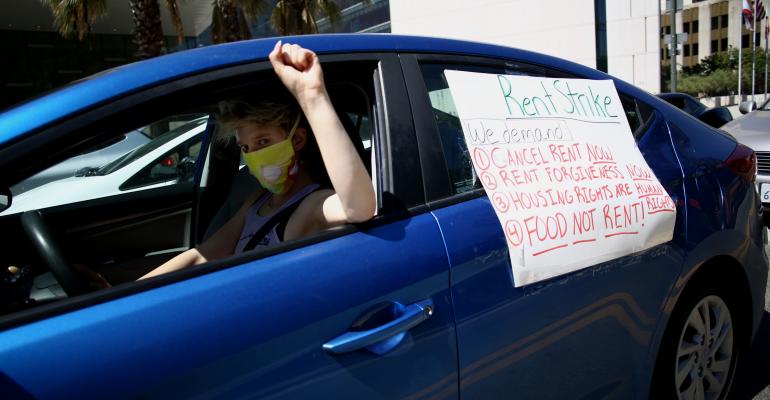 Lease Insurance Could Come into Play Amid COVID Crisis

More than 26 million people have filed for unemployment in the five weeks since cities and state began to order non-essential businesses to close.

Millions of apartment renters across the U.S. have lost jobs and income in the economic crisis caused by the spread of the novel coronavirus. Many are working with landlords by making partial payments and creating payments plans.

But another aspect of the industry is being tested by the crisis: lease insurance products that have replaced security deposits for some renters.

Founded in 2015, Leaselock provides lease insurance that covers damages and lost rent for roughly one million apartment units. At the properties that use LeaseLock, renters don’t have to provide a security deposit to move in. Instead, they pay a deposit waiver fee of $29 a month for a standard lease insurance policy. In return, LeaseLock agrees to insure the property and pay for potential losses on the apartment, including up to $500 in damages and $5,000 in lost rent—or even $7,500 in high rent markets.

LeaseLock does not carry to risk of these policies itself, but sells the risk  to reinsurance companies. Claims on LeaseLock’s lease insurance are triggered when a lease is terminated with damages or an unpaid balance owed. So far these reinsurance companies have not significantly raised their prices for new policies.

More than 26 million people have filed for unemployment in the five weeks since cities and state began to order non-essential businesses to close and residents to shelter in place to the slow the spread of the novel coronavirus.

"There’s risk attached to every renter now," says Mark Stringer, executive vice president for Avenue5, an apartment company with 70,000 units under management, including thousands covered by LeaseLock. "In the past, you may have had some owners say, 'Well, we have residents that never lose their jobs so we don’t have to worry.' Well, now you have to worry."

For April, the effects have been relatively muted.

The amount of rental income collected by apartment companies in April 2020 dropped 7 percent compared to the monthly average set earlier this year, according to LeaseLock.

That’s similar to National Multifamily Housing Council’s rent payment tracker which found that 89 percent of apartment households made a full or partial rent payment by April 19 in its survey of 11.5 million units of professionally managed apartment units across the country.

“It is not as dismal as we thought it was going to look in April,” says Reichen Kuhl, president, founder and chief of insurance and legal for LeaseLock, “Renters who can pay have paid.”

Numbers for May are expected to be worse, however.

Meanwhile, LeaseLock is helping its clients negotiate with residents who are having trouble.

“Right now, 100 percent of people having trouble are being offered concessions,” Kuhl says. “Almost all of these are good, steadily-paying residents, and apartment companies want to keep good stable residents in place.”

So far, renters in trouble seem to be taking these deals, according to early data from cities where the coronavirus struck first. In Seattle and Los Angeles, which issued “stay at home” orders relatively early, the share of people who paid only part of the April rent is much higher—and the amounts being paid seem to match the “50 percent” being offered by many apartment companies, according to LeaseLock.

“We did see a concerted shift towards partial payments,” says Rochelle Bailis, vice president for LeaseLock. “That shift was pretty dramatic in the hardest hit cities.”

For example, Irvine Company is enabling renters to defer 50 percent of their April and May rent payments over a six-month period, interest-free. All renters have to do is “request rent assist” to create a new payment schedule.

Many other apartment companies have halted evictions and offered similar plans – following the advice of trade groups, including both the National Multifamily Housing Council and the National Apartment Association.

Usually, when a renter is more than a month late in paying rent, the property manager will issue a “pay or quit” notice demanding payment. Cities, states and federal agencies have also created moratoriums on evictions covering a wide patchwork of jurisdictions.

All this comes as lawmakers consider further regulating or even outlawing security deposits, which may push more of the industry towards companies like LeaseLock, or the creation of their own installment plans.

“States are putting more regulations on security deposits,” says Rick Haughey, vice president of industry technology initiatives for NMHC. Legislators argue that having to pay a security deposit can be a barrier for many people to renting an apartment. “Most people just don’t have two month’s rent,” says Haughey.

In Cincinnati, Ohio, landlords must now offer renter alternatives to paying a security deposit, according to that city’s new Renter’s Choice Law, which went into effect in April 2020. Lawmakers in Philadelphia have proposed legislation (House Bill 2427) that could lay the groundwork for total deposit replacement, according to Kuhl. Other new rules include limits on the amount property managers can collect as security deposits, how the money is held in escrow and in some places requirements that the deposit can be paid in installments.