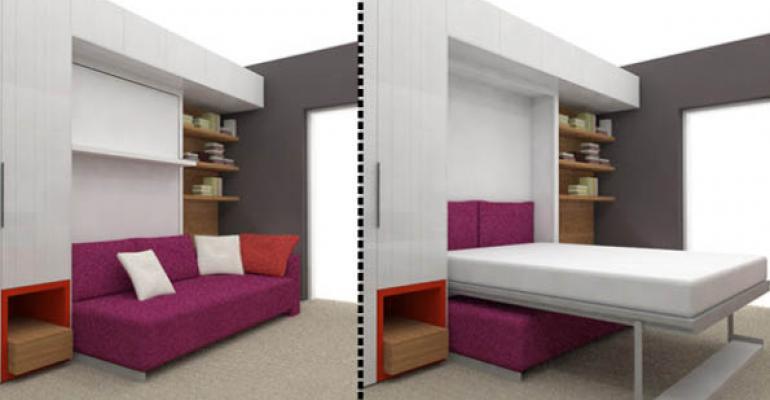 Workers are building a new community of micro-apartments in Austin, Texas. The 138 units at Indie Apartments will range from 350-sq.-ft. studios to 520-sq.-ft. two-bedroom apartments.

“Micro-units are spreading to secondary markets, but I would say slowly,” says Ty Puckett, executive vice president at Transwestern Development Co. Transwestern is currently building the Indie Apartments in Austin and a second micro-unit development in Phoenix.

Micro-units are much smaller than traditional apartments—often containing less than 500 sq. ft. per unit. For many decades, few developers thought to build apartments that small, except as single-room occupancy properties for very low-income people. Today, however, with a apartment vacancies in the low single digits in many metros, developers are investing in such properties, often including fancy amenity spaces to offset the very small living spaces.

“The building activity in this product niche is mostly in the most expensive coastal markets. It appears to us that Seattle has the most of these units, over San Francisco or New York,” says Greg Willett, chief economist for RealPage Inc., a provider of property management software and solutions.

So far, these tiny apartments have performed more or less in line with conventional apartments nearby. “The micro units delivered to date have leased well,” says Willett. “But performances aren’t notably different than for same-neighborhood properties with somewhat larger units.”

However, the micro units seem to serve a different purpose than conventional units. Renters don’t stay as long, so they have higher turnover than conventional apartments. “There’s a lower propensity to renew expiring leases in micro units than in more conventional product. If renters can afford more space, most appear to prefer that option,” says Willett.

For example, Indie Apartments’ gross monthly rent is expected to be 20 percent below that of class-A apartments, making it a good choice for anyone undergoing a life transition, according to the developer.

Developers are now trying to replicate the success of micro-apartment projects in smaller markets. “The demand in secondary markets is somewhat unproven, but with good locations and competitive prices the projects are compelling,” says Puckett.

The trend towards micro apartments is part of a much larger trend as more households live in smaller spaces in urban areas. Developer are building smaller apartments overall.

“The average unit size in this construction cycle has come down a little bit, about 50 square feet,” says Willett. This is largely because developers are building a larger share of their new projects in urban areas than in previous construction cycles. To make these projects pencil out, developers typically need to squeeze more apartments onto expensive urban sites. That will tend to push down typical unit size a little, says Willet.

The average size of new apartments may rise again soon. But that will also be the result of the popularity of urban areas. In this case, a number of Baby Boomers are expected to downsize from single-family houses and move into rental apartments.

“Developers are starting to think about downsizing Baby Boomers as a growing portion of the renter audience,” says Willett. Developers like the Bozzuto Group, based in Greenbelt, Md., are now planning to build larger apartments to attract these older renters.

In all of these cases, households are willing to squeeze into smaller living spaces than they may have been used to in exchange for amenities like a great location.