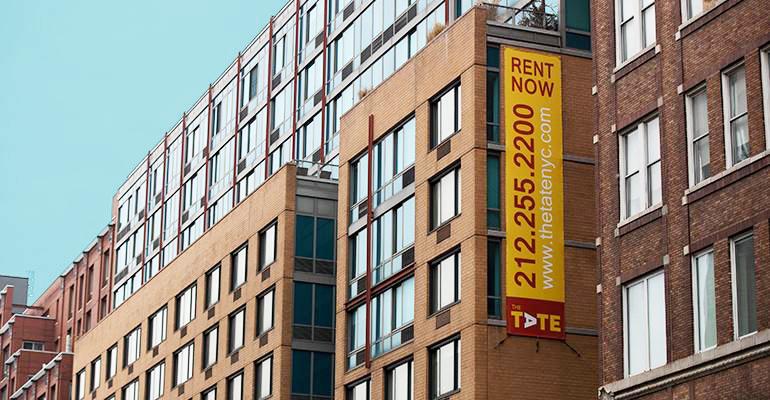 Northeast Is Now the Place to Find a New Apartment: Justin Fox

The majority of new housing units authorized last year in the Middle Atlantic states were buildings with five or more units.

(Bloomberg Opinion)—Over the past few years, the U.S. has seen its biggest wave of apartment construction since the 1980s. Nationwide, this hasn’t been nearly enough to displace the single-family home as the dominant form of new housing (65 percent of all new housing units for which building permits were issued in 2018 were single-unit dwellings, according to the Census Bureau), but there are some big regional differences.

What the chart shows is that a majority (51.8 percent) of the new housing units authorized last year in the Middle Atlantic states (New Jersey, New York and Pennsylvania) were in buildings of five units or more. In the Pacific states, that share was 43.4 percent, in New England it was 37.9 percent, and in the West North Central states (from Kansas and Missouri to the Canadian border) it was 35.8 percent. In the other five Census Bureau subregions, it was below 30 percent. Measuring by state, units in buildings of five units or more were in the majority in Massachusetts, New Jersey and New York, and they accounted for more than 40 percent of new units in California, Illinois, Minnesota, Oregon and Washington.

This wasn’t unprecedented: Apartments’ share has actually fallen a bit since 2015, and California, Illinois, Massachusetts, Minnesota, New Jersey and New York all had years in the 1960s or 1970s when apartments in buildings of five units or more made up the majority of new housing units. Even Texas had a couple of years like that in the early 1980s, although they were followed by quite the hangover, with the number of new apartments built in the state falling by 97 percent from 1983 to 1990.

Still, this time does feel different, especially in the Northeast.

Most of today’s high-apartment-share states are places where building new single-family housing within commuting distance of major job centers is getting hard to do because of land-use politics and simple lack of space. It’s not so much that apartment construction is undergoing a spectacular boom as that new single-family houses have become rare.

New Jersey, which thrived during the suburbanizing post-World War II decades but has struggled since the 1990s, is perhaps the clearest case of this. More apartments have been built in the state in recent years than at any time since the early 1970s, and apartments’ share of new construction has been the highest on record. But overall, new-housing production is still anemic, because single-family construction in the state has been going through its weakest stretch on record.

New Jersey is not technically full (I drove across the state from west to east on Interstate 80 earlier this week and can report that it’s pretty empty till you get to Parsippany-Troy Hills), but there are practical limits on further greenfield development, and almost all of the state’s recent growth in jobs and population has been in the densely populated counties closest to New York City. So developers are squeezing big apartment buildings into old downtowns, next to highways and wherever else they can get permission to build them. This is not a bad thing: Dense infill development is much more environmentally friendly and fiscally sustainable than exurban sprawl, as well as the only realistic way forward for New Jersey.

The shape this development is taking does raise some questions, though. I recently wrote a Bloomberg Businessweek article and a column about the actual shape of most new apartment buildings, so I’m not going to get into that here. But their size is worth noting: As is apparent in the above chart, the number of units being constructed in two-to-four unit buildings is much smaller than during past upswings. There aren’t a lot of 10- or 20-unit buildings going up, either. The Census Bureau’s Characteristics of New Housing data indicate that 78 percent of units completed in multi-unit buildings in the Northeast in 2017 (the 2018 numbers aren’t out yet) were in buildings of 30 units or more, up from a 1977-2008 average of 27 percent. It also indicates that the overwhelming majority of new apartments being built are for rent rather than for sale — the latter represented just 10.5 percent of new multi-family units in the Northeast in 2017, down from 67.5 percent in 2007.

This phenomenon has come to be known as “the missing middle”: The sort of small-scale, often owner-occupied multi-unit housing that could appeal to young families and fit comfortably into existing residential neighborhoods just isn’t getting built. Further evidence of this in New Jersey can be seen in data from CoStar Group, which shows (admittedly amidst a lot of year-to-year noise) a significant rise since the early 2000s in the percentage of new rental apartments with one bedroom or less and a near disappearance of those with three bedrooms or more.

Part of what’s driving this shift is real estate economics. Tighter mortgage lending standards since the financial crisis have made rental projects more attractive, while the big institutional investors that now finance most new multi-unit construction are only interested in big projects. The wide mid-rise buildings that usually result are easier to divide into one-bedrooms and studios than two-bedroom or larger apartments. Politics is a factor, too, as residents of suburban towns often object to family-friendly apartment development that they think will overburden schools.

Birth rates have been falling and household size shrinking nationwide, so shifting demand surely plays a role, too. Still, it is striking how little family-friendly new housing has been going up in New Jersey, a state that has long had higher birth rates and larger households than its neighbors. A densification of the state’s housing mix is inevitable (and the same goes for a bunch of other states), but it’s going to be a problem if none of that dense housing has enough bedrooms to raise kids in.

Justin Fox is a Bloomberg Opinion columnist covering business. He was the editorial director of Harvard Business Review and wrote for Time, Fortune and American Banker. He is the author of “The Myth of the Rational Market.”

To contact the author of this story: Justin Fox at [email protected]