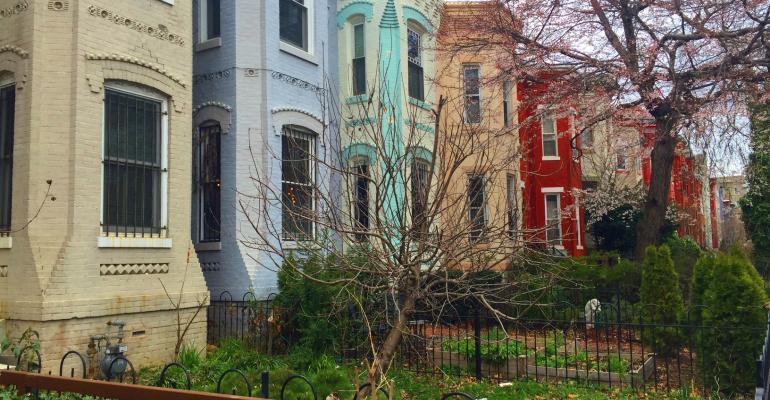 Why Every City Needs Workforce Housing

Workforce housing is a topic that is receiving much greater attention today among officials at all levels of government and the real estate community, as well as those concerned with housing policy and affordability. It is a complex problem as it is both a housing supply problem as well as an affordability problem due to the fact that incomes of moderate and middle income households have essentially been stagnant for the last 20 years or so.

Workforce housing generally serves families and households making greater than 60 percent of area median income (AMI) and up to 120-150 percent of AMI in the country’s highest cost metropolitan areas such as San Francisco and New York City. While there are subsidies available for households earning less than 60 percent of AMI (although the demand for subsidy far exceeds availability), there are few, if any, subsidies available for those earning above that level. Therefore, the combination of stagnant wages and rents that have increased significantly has created acute housing affordability issues for many people. 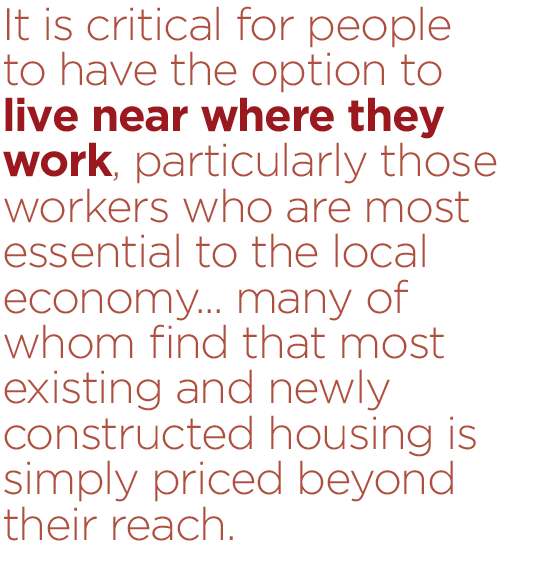 It is critical for people to have the option to live near where they work, particularly those workers who are most essential to the local economy. Vital employees include teachers, emergency service workers, nurses and retail clerks, many of whom find that most existing and newly constructed housing is simply priced beyond their reach. Especially in urban cores and near employment centers, land and development costs are very high, thereby forcing people to live further away from jobs and significantly increasing their commuting times and costs. When people can afford to live closer to their jobs, entire communities reap the benefits. Commute times and traffic congestion ease, neighborhoods are more diverse and provide the opportunity for families to live and grow in one place over time, and economies strengthen by helping employers attract and retain essential workers.

While certain national industry organizations, such as the National Multi Housing Council (NMHC) and the Mortgage Bankers Association (MBA) have begun to address the needs surrounding workforce housing, there is currently very little being done at the federal level. However, a number of states and local municipalities have begun to address the shortage of quality affordable homes for working, middle-class members of their communities. In a number of expensive housing markets, local officials have created special programs to provide rental homes for workforce families. One such example is New York City’s New Housing Opportunities Program, which provides moderate-income rental housing. In other instances, cities are incentivizing private developers to build new workforce housing. For example, in Mount Vernon, N.Y., the city and developers are hoping to revitalize the city’s downtown as part of a redevelopment effort that includes “luxury workforce housing,” with amenities such as a gym, cinema room, children’s playroom and rooftop terrace. Such features, not generally associated with affordable housing, reflect the desire among many municipalities to increase the quality of affordable housing for their residents.

In addition, certain local Housing Authorities have instituted programs to purchase market rate properties and then self-impose rent restrictions to make these properties affordable to households earning 80 percent of AMI or below. Finally, many municipalities have adopted laws requiring developers of new apartment properties to allocate or set aside a percentage of those new units for low and moderate income households.

It is unlikely, however, that new construction alone will solve the problem of workforce housing, especially given the high cost of new construction. Therefore, preserving and rehabilitating older rental housing, which is generally and naturally more affordable to begin with, is critical to helping address the needs of workforce housing. More than half of our apartment inventory was built before 1980 and every year the industry loses a significant number of units to obsolescence and other factors. Municipalities, owner/operators and lenders should, therefore, work together to find ways to maintain and preserve workforce housing. The Federal Housing Finance Authority (FHFA), through its annual Scorecard, has been encouraging Freddie Mac and Fannie Mae to increase their focus on workforce housing. Furthermore, through their proposed “Duty to Serve” regulations, FHFA is encouraging more emphasis on the preservation of affordable and workforce housing.

Single-family rental housing can play an important role in addressing the needs of moderate and middle income households. Single-family rental homes represent approximately half of the rental inventory and tend to be larger units, thereby making them especially attractive to families. Especially since the foreclosure crisis, many companies, including some REITs, have acquired large inventories of homes and converted them to rentals. This business model continues to evolve.

Insuring an adequate supply of good quality, well-located and affordable workforce housing is critical to the health and well-being of all communities and should be an important component of our national housing policy.