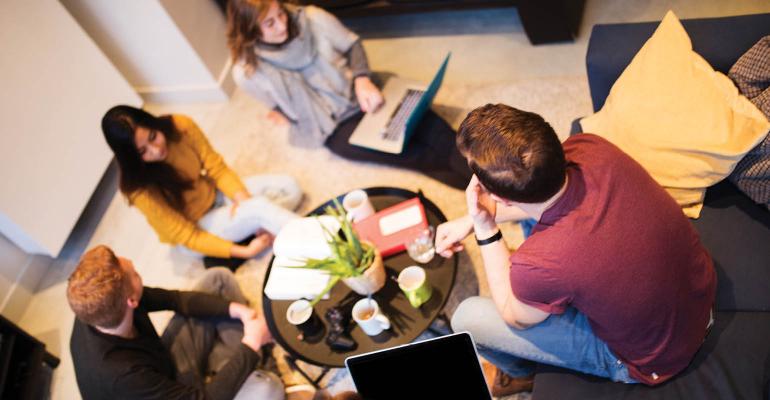 Younger Apartment Tenants Struggle to Keep Up with Rising Rents

While people in their 20s and early 30s continue to opt for renting vs. owning, they are often forced to live with roommates or with mom and dad.

Many younger millennials continue to opt for renting vs. owning, but they aren’t filling as many apartment units as investors and economists had hoped.

"Despite the recent pickup in incomes, adults under age 35 are still not forming households at rates as high as previous generations at that age," according to the State of the Nation's Housing 2018 report from the Joint Center for Housing Studies at Harvard University.

Young people are still the most important tenant demographic for the apartment sector, particularly for the class-B properties where many millennials sign their first leases. However, those young people who can form their own households have to strain their budgets to pay their rents. Financial stresses, including relatively low wages and high student loan debt, still keep many young people living with their parents or doubled up with roommates.

Class-B apartments still have an occupancy rates of close to 95 percent, according to many economists. However, the strain on the incomes of young renters provides a check on how quickly rents can rise at these properties.

Apartment managers still depend on millennials

Nearly a third (29 percent) of all renter households are made up of people in their 20s to early 30s who live alone, usually in middle-market class-B product, according to data from Real Page Inc., a provider of property management software and services which collects information from 5.5 million renters in its data bases.

“While they do earn enough to live by themselves, their budgets are tight,” says Greg Willett, chief economist with RealPage. On average, they pay 28 percent to 29 percent of the income on rent, which is close to the limit of what institutional property managers will allow.

The next largest group of renters is comprised of young people who have to double up with roommates to make ends meet. “They are about the same age as the starting-out singles, but they can’t afford to live alone,” says Willett.

In the most expensive markets in the country, these roommate households fill more than a third of all apartments. That makes roommate households the largest group of renters in these markets. “Young adult roommates” account for 41 percent of the households in San Jose, Calif. and 38 percent in San Diego, while the share reaches around 30 percent in places like San Francisco, Portland, Los Angeles and Boston, says Willett.

Jobs are much more available than earlier in the recovery—the unemployment rate is near its lowest point in decades. However, these young renters still face challenges. More than half (55 percent) of all renters have student loan debt, and the average college graduate with a bachelor’s degree takes 21 years to completely pay off his or her student loans, according to research from the NHP Foundation, a national, non-profit provider of affordable housing based in New York City.

People with lower incomes are often forced to squeeze together in overcrowded situations. “Those looking to really crowd a bunch of renters into one residence are more likely to opt for rental single-family homes or small apartment projects where on-site personnel aren’t present,” says Willett.

Many still live with mom and dad

“Many who would struggle to afford today’s rents just aren’t renting apartments at all,” he notes.

The share of 20-somethings who live at home with mom and dad remains elevated by historical standards. The percentage of recent college graduates who live with their parents grew to 28 percent in 2016, up from 19 percent in 2005, according to real estate website Zillow.

“In markets like New York, Miami and Los Angeles, grads back under the family roof can number as high as 45 percent,” says Marijane Funess, director of marketing for the NHP Foundation.