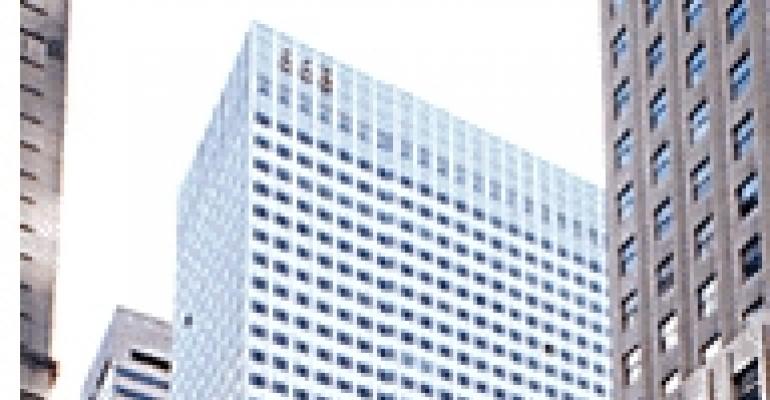 Top Price for Top of the Sixes

For years, a favorite attraction for out-of-towners was a bar/restaurant called Top of the Sixes, a pricey perch that made up for mediocre food with spectacular views from atop midtown Manhattan’s 666 Fifth Avenue. The tourist trap is long gone (the space is now leased to a high-end cigar bar), but yesterday out-of-towner Charles Kushner, a New Jersey real estate investor, put the office tower back on the global map by paying a record $1.8 billion for the 1958 landmark.

That now stands as the highest price ever paid for a Manhattan office building — roughly $1,200 for each of the 1.5 million sq. ft. of leaseable Class-A space in the 40-story structure. The price also eclipses the record set last year when the seller of 666 Fifth — Tishman Speyer Properties — paid $1.67 billion for the MetLife Building (200 Park Avenue). One notable difference between the two deals: Tishman Speyer paid about half the price per sq. ft. — about $604.

666 Fifth, which fills the block front between 53rd and 54th Streets, has nearly 85,000 sq. ft. of retail space, including the NBA Store and Brooks Brothers. The largest tenant is Citigroup, whose rent —believed to be in the seven figures — covers the cost of a neon corporate logo on the top of the tower.

There are colorful story lines on both sides of this deal, which brings two area real estate dynasties together. First there is the Kushner family saga. The private company, which owns 22,000 apartments and roughly 5 million sq. ft. of office buildings and industrial properties in the mid-Atlantic market, instantly becomes a player in Manhattan via this massive deal.

The family had already established a beachhead earlier this year when Kushner’s 25-year-old son, Jared, bought a controlling stake in the New York Observer, a cheeky weekly that closely monitors the world of high finance and real estate. Jared, a principal in the family firm, signed the contract to buy 666 Fifth Avenue last week.

According to a spokesman, founder Charles Kushner, who recently completed a prison sentence for 18 counts of tax evasion, witness tampering and illegal campaign donations, is “still very active and very much a part of the company”.

For the Speyer family, which controls global investment/development firm Tishman Speyer, the deal provides a tidy payout. Tishman-Speyer, which also owns Rockefeller Center to the south, bought 666 Fifth in 2000 for $516 million — producing annual returns north of 40%.

This is by no means an indication that Jerry Speyer is anything but bullish. Overall, Tishman has been a huge buyer in Manhattan. In addition to the MetLife deal, it has purchased more than $12 billion in New York City real estate over the past six years. Last month, it was the winning bidder — at $5.6 billion — for Stuyvesant Town and Peter Cooper Village, two gargantuan apartment complexes. That deal still stands as the priciest sale of a commercial real estate complex in U.S. history.

Indeed, massive deals are closing every few weeks in Manhattan. In November, for example, Yonkers-based AVR Realty agreed to pay $1.28 billion for Boston Properties’ Five Times Square tower. In November as well, 1745 Broadway was quietly sold for $509 million, proving that half a billion dollar deals don’t garner much ink these days.

Even at these prices, buyers are elbowing each other for trophy properties. “With the amount of capital out there today needing to be placed, everything is a target,” says Bret Wilkerson, CEO of Boston-based real estate consulting firm Property & Portfolio Research.

“Office is an attractive asset class today in part because you can get a large amount of capital placed — and there is upside [potential].”

While cap rates continue to fall, the fundamentals continue to improve, too. According to Manhattan-based real estate services firm Colliers ABR, average Class-A asking rents in midtown increased by 4.7% to $77.41 per sq. ft. between the end of August and November. Vacancy has also been trending downward over the past few months, forcing tenants to pony up large sums in their quest to secure space.

Colliers pegged overall Manhattan office vacancy at 7.6% by the end of November, down from 7.8% just one month earlier. One interesting trend that Colliers has unearthed: Vacancy within Class-B office buildings in Manhattan fell from 10.2% to 9.9% between the end of October and November.

While investors focus on the priciest properties, some top-tier tenants are eying less costly digs, says Robert Sammons of Colliers ABR. One notable example is International Creative Management, which in November relocated from 40 West 57th street into 30,000 sq. ft. near Times Square at 825 Eighth Avenue.

Law firm Labaton Sucharow & Rudoff decided to relocate and expand in lower Manhattan. In November, the firm leased 70,000 sq. ft. at 140 Broadway, only a few blocks east of Ground Zero. Labaton leases space in midtown at 100 Park Avenue (two blocks south of Grand Central terminal), where average asking rents are $76.74 per sq. ft. So what does Class-A office space in downtown Manhattan around 140 Broadway rent for these days? Try average asking rents of $48.96 per sq. ft. at the end of November (or roughly 60% cheaper than midtown), reports Colliers.

“There’s just not that much space in midtown, and that’s definitely pushing demand into lower Manhattan and even New Jersey,” says Andy Joynt, a real estate economist at PPR. “Only two major buildings will be completed in midtown between now and 2010 or 2011, too. So the supply side of the market isn’t going to change much in the near future.”
0 comments
Hide comments
Related
Sponsored Content