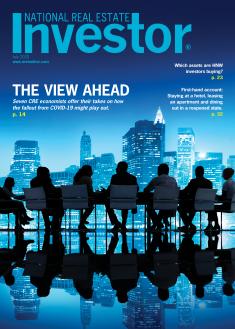 Ackman to Put Gains From Luxury Apartments Into Pershing Buyback
Jun 06, 2018
The hedge fund manager personally holds a majority stake in Rittenhouse Hill, a luxury apartment complex that’s one of the largest in Philadelphia.

10 Must Reads for the CRE Industry Today (June 6, 2018)
Jun 06, 2018
A battle is playing out between gentrifying forces and the desire to keep affordable housing in Washington, D.C., The New York Times reports. U.S. home prices will rise at twice the speed of inflation an pay, according to Reuters. These are among...

10 Must Reads for the CRE Industry Today (June 5, 2018)
Jun 05, 2018
Forbes looks at how real estate asset managers can minimize risk from rising interest rates. Sears gets more time to pay down its debt, according to CNBC. These are among today’s must reads from around the commercial real estate industry.

Kushner Cos. Loans for $100 Million Scooped Up by Korean Firms
Jun 05, 2018
Prior to receiving the Citigroup loan earlier this year, Kushner Cos. and its partner in the building, KABR Group, had trouble finding a firm to refinance more than $180 million of loans.

Grand Plans for a New York Tech Hub in the Bones of an Old Hotel
Jun 05, 2018
Manhattan’s old Biltmore Hotel, where people once met each other “under the clock,” is being reconfigured as a tech incubator.

Toys R Us to Clear Out Wayne, NJ HQ
Jun 05, 2018
The company plans to put its headquarters up for sale to pay off creditors.

For Sale: A New Home Built by Your Local Private Equity Firm
Jun 04, 2018
While private equity firms bought thousands of homes to rent out after the housing crash a decade ago, they don’t usually build and sell them.

Kushner Buys 666 Fifth Stake, Ending Rocky Vornado Partnership
Jun 04, 2018
Kushner Cos. has said it will partner with a unit of Brookfield Asset Management Inc. in yet another attempt to turn around the property.

10 Must Reads for the CRE Industry Today (June 4, 2018)
Jun 04, 2018
HelloFresh is the latest meal kit to be sold in a grocery store, CNBC reports. New York City officials have created a plan to help Manhattan's historic Garment District, according to the Wall Street Journal. These are among today’s must reads from...
Load More