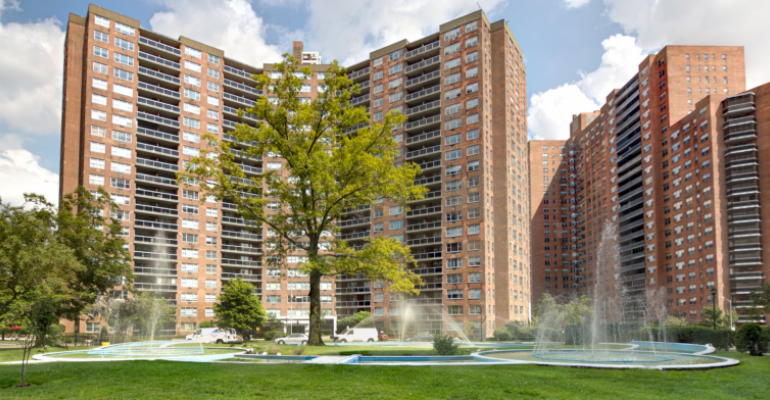 The firm sees the 1,300-unit property, known as Parker Towers, as an affordable option for renters seeking alternatives outside of Manhattan and in parts of Queens, such as Long Island City, where new construction and sky-high prices are rife.

(Bloomberg)—Blackstone Group LP has agreed to buy an apartment complex in the New York City borough of Queens for about $500 million, according to people familiar with the matter.

The firm sees the 1,300-unit property, known as Parker Towers, as an affordable option for renters seeking alternatives outside of Manhattan and in parts of Queens, such as Long Island City, where new construction and sky-high prices are rife. The seller is Jack Parker Corp.

The transaction extends Blackstone’s reach in the city’s rental market. The investment is being made by Blackstone Property Partners, the firm’s open-ended vehicle that focuses on stabilized properties in major cities. The fund also owns two large apartment complexes in Manhattan: Stuyvesant Town-Peter Cooper Village and Kips Bay Court. Blackstone often upgrades the properties to boost their value.

Paula Chirhart, a representative for Blackstone, declined to comment.

Parker Towers is in the Forest Hills neighborhood, about 30 minutes by subway from midtown Manhattan. The complex is comprised of three 20-story residential towers. Amenities include 24-hour doorman service, a gym, dog run, indoor parking and a private club. The median asking rent in the area was $1,950 at the end of the second quarter, according to data from StreetEasy. In Midtown it was $3,754.

A one-bedroom at Parker Towers is listed at $2,350 a month and a three bedroom at $3,350 on StreetEasy. By contrast, a one-bedroom in Long Island City with comparable amenities could rent for $3,700 and up. That area is about 15 minutes by subway from Manhattan.

Blackstone is making the purchase as the rental market softens. Tenants are gaining the upper hand in urban centers across the U.S. as new amenity-rich apartment buildings, constructed in response to big rent gains in previous years, have been are forced to fight for customers. In Manhattan, many landlords have been offering concessions including a month of free rent.

Earlier this summer, GreenOak Real Estate and Slate Property Group agreed to buy an apartment building known as the Biltmore near Times Square. And GFI Capital and Elliott Management Corp. agreed to acquire the Parker New York Hotel, which backs onto a strip of 57th Street known as Billionaires’ Row. Both properties were also being sold by Jack Parker.