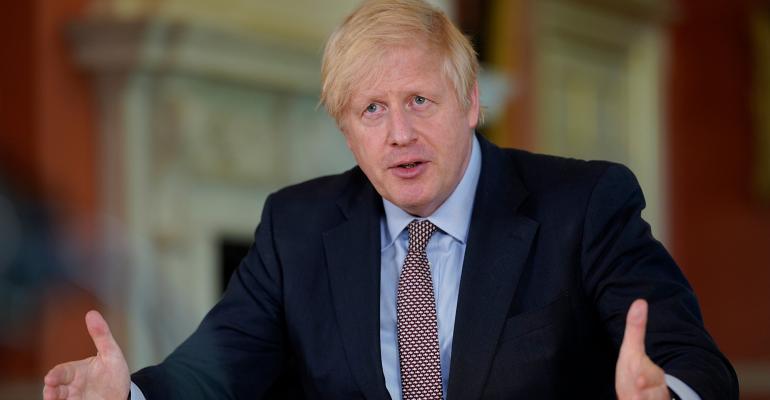 Johnson Faces Pushback Over Plan to Get U.K. Back to Work

The shift in tone follows weeks of pressure from members of Johnson’s Conservative Party pushing for a swift end to the lockdown.

(Bloomberg) -- Boris Johnson will flesh out his plan for lifting the U.K. lockdown in Parliament as he seeks to get more people back to work, as opposition politicians and labor unions accused the government of causing confusion and putting the health of workers at risk.

In a televised address to the nation on Sunday evening, Johnson announced the “first careful steps” to easing lockdown rules in a three-point plan, starting this week with unlimited outdoor leisure time for sports such as golf and tennis, and allowing people to drive to parks and beaches in England. He told people who cannot work at home -- such as those in the manufacturing and construction sectors -- to return to their occupations.

“Work from home if you can, but you should go to work if you can’t,” the prime minister said. The government also dropped its “stay home” message in favor of a call to “stay alert,” and is expected to publish details of its lockdown plan in a 50-page document on Monday.

The second phase of the plan would see primary schools and shops start to reopen from June 1, while step three may allow open-air cafes to resume trading in July.

The shift in tone follows weeks of pressure from members of Johnson’s Conservative Party pushing for a swift end to the lockdown. But while Johnson stressed his “careful” approach, it’s clear the government faces a battle to persuade businesses and workers it’s safe to resume operations.

“The prime minister appears to be effectively telling millions of people to go back to work without a clear plan for safety of clear guidance as to how to get there without using public transport,” Starmer said in a statement.

On Sunday, four of the biggest U.K. labor unions called on the government to ensure adequate coronavirus-safety measures are in place before allowing people to return to work. The National Union of Rail, Maritime and Transport Workers urged members to “refuse to work” where safety is compromised over the government’s “confused and contradictory messaging over the Covid-19 lockdown.”

The government’s efforts weren’t helped by official statistics, released Monday, that showed some of very the industries that Johnson is trying to get back to work -- including construction -- have the highest death rates from the virus. Security guards, taxi drivers, chauffeurs, bus drivers and chefs were also among those most at risk.

Jonathan Geldart, director general of the Institute of Directors, said government guidance must be clear on how businesses can return to work safely. “As people with ultimate legal responsibility, directors need to have confidence that it’s safe, and that if they act responsibly they won’t be at undue risk,” he said in an emailed statement.

Asked about the confusion during his media round on Monday, Foreign Secretary Dominic Raab said the first changes to the lockdown rules would take effect on Wednesday, and that businesses would be receiving guidance on how to make workplaces safe before that.

Meanwhile in Scotland, First Minister Nicola Sturgeon told STV the majority of Johnson’s statement applied only to England, and reiterated that her administration would be keeping its “stay at home” advice and ignoring the new “stay alert” message. The government of Wales said earlier it will likewise not follow Johnson’s lead.

The prime minister is caught between demands to get more people back to work and off the state’s furlough program, and the fear of triggering a new wave of infections that could require ministers to shut down the economy again.

The Treasury is considering allowing furloughed workers to return to work part-time as part of a gradual withdrawing of the government’s job retention program, the Sunday Times reported. The Telegraph reported the program will be continued to September, but will only pay 60% of wages, down from 80%. Workers returning on a part-time basis will also get their salaries topped up, the newspaper said.

In his address, the prime minister said the government wouldn’t do anything that risked a new wave of Covid-19 infections, and that the U.K. had avoided the “catastrophe” of the “reasonable worst case scenario” of 500,000 deaths from coronavirus because widespread adherence to lockdown rules had prevented hospitals from being overwhelmed.

He also revealed plans to tighten the rules in key areas. Anyone flouting social-distancing rules will face fines starting at 100 pounds ($124), an increase from 60 pounds. Fines will rise to a maximum of 3,200 pounds for repeat offenders.

More details of the government’s plan:

“Of course we will be monitoring our progress locally, regionally, and nationally and if there are outbreaks, if there are problems, we will not hesitate to put on the brakes,” Johnson said.

The U.K. reported another 269 Covid-19 deaths on Sunday, bringing its total to 31,855, the most in Europe. That leaves Johnson with little room to maneuver as he charts a course out of the lockdown, especially after this government faced intense criticism over its response in the early days of the pandemic.

Researchers from Imperial College London, who are advising the government’s response, warned ministers last week deaths could top 100,000 if restrictions are eased too quickly, the Sunday Times reported.

Johnson said the government “must reverse rapidly the awful epidemics in care homes and in the NHS,” among conditions for easing the lockdown. “We have been through the initial peak -- but it is coming down the mountain that is often more dangerous.”

--With assistance from Alex Morales and Alastair Reed.

To contact the reporter on this story:
Stuart Biggs in London at [email protected]

To contact the editors responsible for this story:
Tim Ross at [email protected]
Edward Evans