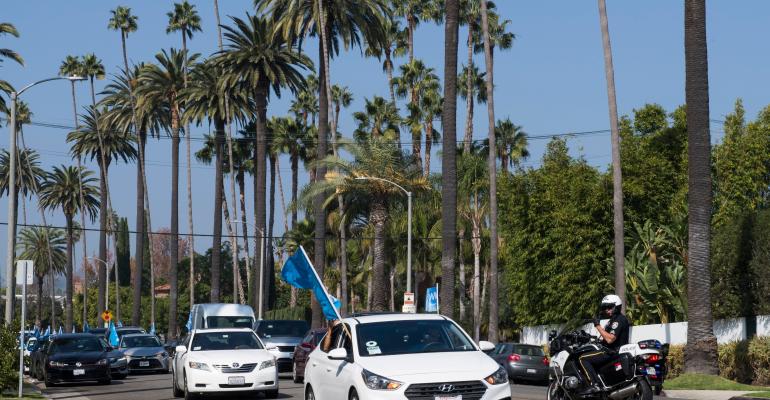 Then the tech moguls arrived, and Trousdale is now among the most expensive in neighborhoods in the Los Angeles area -- commanding the highest price per square foot, according to Rayni Williams, who has sold about $95 million worth of property in the community in 2019.

Earlier this year Garrett Camp, co-founder of Uber Technologies Inc., paid $72.5 million for a home down the road from the one Aniston sold to legendary bond investor Bill Gross, according to a person familiar with the transaction. The purchase by Camp topped the neighborhood’s $70 million record set by Minecraft creator Markus Persson in 2014.

Hollywood stars may have money, but tech biggies are really rich, and they’re usually younger -- Camp is 41 and Persson is 40. And that is transforming the Southern California metropolis and its luxury real estate market, where Los Angeles now has the largest tech workforce on the West Coast after San Francisco and Seattle, according to real estate firm CBRE.

And the owners: Next door to Trousdale in Bel Air, billionaire Elon Musk took out mortgages amounting to tens of millions of dollars for multiple homes.

“L.A. is such a calling card,” said Branden Williams, Rayni’s husband and partner, pointing to the draw of its glamour and climate on a clear, mild fall evening from the living room sofa of a $60 million Trousdale hilltop mansion he’s marketing, overlooking the city lights that define the skyline from downtown skyscrapers to the Pacific Ocean. “You feel like you’re up in the woods up here, and you’re two blocks off the Sunset Strip.”

It also helped that wealth in tech companies is surging this year as markets hit new highs. The tech-laden Nasdaq Composite Index has climbed 30% this year, creating close to $3 trillion in market value. A slew of tech initial stock offerings this year -- including Uber’s -- allowed founders and other stakeholders to cash out. Camp has sold about $20 million of shares in November, which is just a small fraction of his $2.8 billion fortune, according to the Bloomberg Billionaires Index.

Facebook Inc. and Alphabet Inc.’s Google topped the list for the five biggest tech office deals in Los Angeles this year, where almost 1.2 million square feet of space were snapped up, according to CBRE. That’s the equivalent of more than 20 American football fields. The home purchases by tech moguls reflect that cluster effect.

“You need your tribe,” Brian Ades of Sotheby’s International Realty, who has represented Musk, said of tech billionaires. Compared to other buyers, they’re a lot more demanding and often expect immediate results, pushing brokers to have the mindset that “I can shut down the Bay Bridge and run elephants backwards if I have to,” he said.

Following the arrival of tech titans, the next wave of buyers would likely come from abroad, at least three brokers with listings in the area said. The buyers are likely from Europe and the Middle East, as well as China, in spite of the clamp down by the government. And that Trousdale property they plan to buy will probably not be their only home.

“People who come here want a home in their portfolio of six or seven homes,” said Rayni Williams. They’ll stay in Los Angeles for the weather or for business or social events, “then they’re off to New York or Europe in the morning.”

To contact the reporter on this story:
Hailey Waller in New York at [email protected]

To contact the editors responsible for this story:
Linus Chua at [email protected]
Ian Fisher