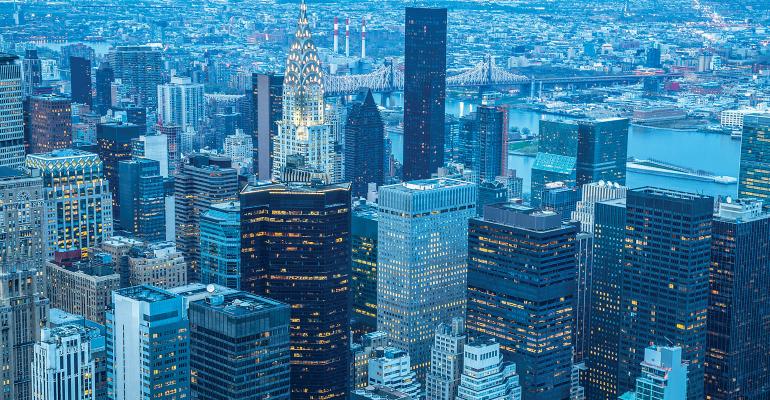 Previously bullish sentiments in the office sector have begun to wane.

Although it has not been the star of this extended commercial real estate cycle, the office sector has delivered its fair share of strong performance and solid returns. Occupancy rates and rents rose, cap rates fell and development has been kept in check.

But now, for the first time in the five years since NREI began its exclusive research gauging sentiment in the sector, cracks have begun to emerge. That’s not to say it’s time to worry. A majority or clear plurality of respondents for each question indicated a belief that fundamentals have more room to improve. Yet across the board, the sentiment has begun to turn.

Fewer respondents answered in the most unequivocally bullish ways for each question. Moreover, in answers to new questions added to this year’s research there’s a clear sense that trends like co-working and telecommuting are having an impact.

For example, respondents were asked to rank the relative strength of their region on a scale of 1 to 10. The West (7.7) led the way, followed by the South (7.5), the East (7.0) and the Midwest (6.5). However, the scores for each region showed a noticeable decline from a year ago, falling by between 20 basis points and 50 basis points across the board.

Respondents were asked to estimate cap rates in their regions and nationally and generated figures of 6.1 percent and 6.0 percent, respectively. Those numbers are a bit lower than market statistics suggest. CBRE’s most recent U.S. cap rate survey placed central business district (CBD) cap rates at 6.7 percent and suburban cap rates at 7.9 percent as of the second half of 2018.

Respondents were also asked about the outlook for CBD office properties in comparison to suburban complexes. Responses were similar for both property types and mirrored overall sentiment for the sector.

As in 2018, respondents in this year’s survey ranked CBD buildings and suburban properties as equally attractive (exactly 50.0 percent for each). But when it came to projecting which type of investment offers higher long-term yields, suburban (52.2 percent) slightly edged out CBD office buildings (47.7 percent).

As of May 2018, suburban office values outperformed CBD offices on a three-year basis, according to Real Capital Analytics’ Commercial Property Price Indices (CPPI). RCA’s CPPI registered that CBD office pricing has gone down 2.0 percent since it peaked in November 2017 and 0.3 percent year-over-year, while suburban office pricing rose 6.2 percent since last November and 8.5 percent year-over-year.

As to why that might be, one respondent wrote, “Investors wanting to sell since there is not much more room for rent increases in the foreseeable future.”

For example, New York’s iconic Chrysler Building is currently on the market. Abu Dhabi, which is the Chrysler Building’s majority owner through its sovereign wealth fund, is said to have hired CBRE Group to market the property, according to Bloomberg. The fund paid $800 million for a 90 percent stake in the building in 2008.

Respondents were also asked how they see various financing aspects changing in the next 12 months.

When it comes to the risk premium—the spread between the risk-free 10-year Treasury and cap rates—respondents were split, with 46 percent expecting an increase while 43 percent expect it to remain the same.

Two factors that a majority of respondents again do not expect to see much movement on are loan-to-value (LTV) ratios and debt service coverage ratios (DSCR). About three-fifths (63 percent on LTV rates and 59 percent on DSCR) expect those metrics to remain flat. Those numbers are down just slightly from a year ago.

Respondents were even slightly more bearish on the national picture, with 50.7 percent saying occupancy rates would rise (down from 63.1 percent in 2018) and 37.8 percent saying rates would decline (up from 24.2 percent last year).

In the first two quarters of 2018, the U.S. office market experienced the influx of 28.8 million sq. ft. of new space, according to real estate services firm Cushman& Wakefield. This was higher than the amount of new space delivered during the same period in 2017. By year-end 2018, new office deliveries should have reached 68.4 million sq. ft. “Developers are playing catch up now,” according to David Bitner, head of Americas capital markets research with Cushman & Wakefield. “The last three cycles had a lot more construction relative to inventory.”

Bitner expects developers to begin pulling back in 2019, with 54.7 million sq. ft. in new office deliveries projected for the year. This figure is based on projects under construction, which take approximately two years to complete.

Meanwhile, on rents, there were not many concerns. Overall, about three-fourths of respondents (75.8 percent) expect rents to rise in the next 12 months, while only 14.6 percent expect them to decrease. Those figures were not much different from 2018, when 77.9 percent said rents would rise and 12.7 percent said they would decrease.

In a new question for this year’s report, we asked readers to identify how active certain tenants have been in the market on a scale of one to five, with five being “extremely active.” Tech firms (3.9) topped the list by a large margin, whereas FIRE firms (3.0), small businesses (3.0) and law firms (2.9) all finished with similar marks.

We also asked respondents how the rise of co-working operators and the increase of telecommuting was affecting office leasing.

“Telecommuting is a draw, but not too significant here yet, and finding the right fit for the tenant is a concern,” one respondent wrote. “But the opportunity is there if you have the ability to provide the amenities that the tenant is willing to pay for, i.e., in a well-defined and well-recognized location that is highly visible from the highway, and in an area that is highly visited by the public.”

More than half of respondents (54 percent) also indicated that they are seeing fewer tenants opt for traditional office layouts, preferring more open office plans. Another 30 percent said the amount of each type has been about the same. Only 7 percent said they are seeing more tenants opt for traditional office layouts and fewer open-office plans.

As one respondent wrote, “The major office consumers in our market are tending towards less space and more collaboration area, but there also some cracks in the enthusiasm for this concept, so that there may well be a return to more panelized or semi-private offices.”