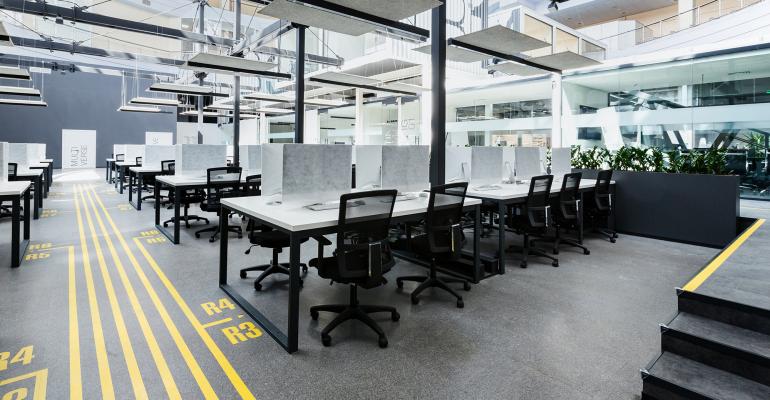 San Francisco is among markets seeing the most fallout in terms of increasing sublease space.

The amount of available sublet office space nationwide is growing as tenants downsize their office footprints. This is happening as a result of expanded remote working policies, certain industries being devastated by COVID-19 and companies abandoning ambitious growth plans as the economy worsens.

Some markets are likely to add a significant amount of sublet space based on size of their office inventory and type of local tenants.

“All densely populated markets, especially those that saw a significant number of COVID-19 cases, are subject to consolidation and should anticipate additional sublease availability, especially in the short term,” says Matt Dolly, research director in the New Jersey office of real estate services firm Transwestern.

But while space needs will be pared backs as tenants look to consolidate and allow employees to work from home, he suggests that the additional office space needed to allow for social distancing may offset some of the reductions.

While Manhattan has the most available sublease office space by square footage, this is only because of the market’s size, according to Anderson. In fact, “We have not seen any significant increase in sublease space there over the last few months.”

Manhattan did not see an extraordinary amount of direct or indirect office space come on the market in the second quarter, agrees Corrie Slewett, Transwestern’s research manager in Manhattan. However, “We have seen more activity now that third quarter has begun. Manhattan sublet availabilities are currently at 2.8 percent, which is high for this market,” she adds.

Available space offered is still a mix of direct and sublet space, Slewett notes, but she expects the addition of more sublet space to the market over the next few quarters.

To help gauge what to expect, her team analyzed the impact of the Great Recession, beginning with the 2008 Lehman Brothers collapse. Slewett notes it was a full year before sublet space additions peaked. “It’s a different situation now, however, because companies are questioning whether to lease out their excess space in anticipation of a smaller on-site staff or keep their larger space in order to comply with social distancing for a full on-site staff.”

“Surprisingly, we have seen little increase in available sublease space in Houston, potentially because significant downsizing was already taking place there prior to the pandemic,” says Anderson.

But Houston-based Stuart Showers, vice president of research at Transwestern, notes, “Tenants are relaying information to landlords that indicates a new wave of sublease supply is anticipated to be made available across the Houston metro.”

While many Houston tenants have been holding off on making changes until office workers return, Showers expects a wide range of industries to add sublet space to the market. That’s because Houston is in a more vulnerable position than markets with stronger diversification across industries and more in- demand workforces. “Houston’s long ties to the energy sector put it in a unique and troublesome position post-pandemic, as the double whammy of energy’s collapse and COVID-19 put a significant portion of the workforce at risk,” Showers notes.

“The initial wave of space added to the sublease market will be due to financial constraints and challenges dealing with business operations related to COVID-19.”

Sublease offerings are most likely to come from the energy sectors and other sectors that have been most impacted by COVID-19, including the airline industry, hospitality and co-working operators, according to Showers. For example, he notes that United Airlines has more than 200,000 sq. ft. in a class-A trophy tower in Houston’s central business district, and WeWork has significant lease positions throughout the metro area. “Energy-related offerings will also be a heavy contributor to new sublease supply as low demand, consolidation, and time play into tenants making sublease space available,” he says.

However, for most corporate tenants, downsizing tends not to be an immediate reaction. “Businesses must look to cover both short- and long-term needs, and they don’t want to be reactionary at a high future cost. In the long run, it’s still more likely than not that companies will choose to return to traditional office space utilization as business operates most efficiently with team members together.”

CBRE’s Anderson agrees that most of the sublease space coming to market is due to companies downsizing as a result of this year’s radical change in economic conditions rather than the switch to remote working. There is evidence that some companies are reducing space because many employees are choosing to work from home, but that has not been a significant influence on the increase in sublease space, he says. “In some cases, companies’ ambitious plans for expansion were curtailed, and they decided to give back banked space, which sometimes happens with fast-growing tech companies.”

“Most notably, tech tenants have been offering space for sublease,” Anderson notes. For example, available sublease space has risen by 22 percent in downtown Chicago since April 1. Forty-five percent of that space is being offered by tech tenants. In San Francisco, about 54 percent of available sublease space is being offered by the tech industry.

“We are expecting more sublease space to come to the market, but it’s hard to determine where this may be more problematic,” Anderson says. “Considering San Francisco’s recent increases in space offered for sublease and the expectation for more to come, there is concern in that market.”

The biggest question right now is whether the need for office space is going to decline because of more companies having flexile/work-from-home arrangements or if it is going to increase to accommodate social distancing guidelines, notes Andrew McShea, Transwestern’s research analyst in San Francisco.

Some of the largest tech companies, including Twitter, Facebook, Shopify, Square and Slack, have implemented an optional permanent work-from-home structure if employees choose.

“This will likely be more widespread among certain industries, but for industries like real estate, there may be some flexibility for support staff, but the brokerage role is heavily reliant on human interaction,” McShea says. He adds that the same is true for the hospitality, retail, and food sectors.

Meanwhile, San Francisco was already experiencing a spike in sublease space prior to the pandemic, beginning in the second half of 2019, largely due to Uber marketing 750,000 sq. ft. for sublet across multiple properties.

“In the second quarter 2020 alone, however, sublease availability spiked to nearly 1 million sq. ft., and companies that we saw sign leases in fourth quarter of 2019 for 50,000 square feet or more are now marketing it for sublease,” McShea notes.

For example, Macys.com (not to be confused with the retail locations) is subleasing its entire 280,000-sq.-ft. office spac, and Credit Karma has listed 150,000 sq. ft. of its own space for sublease. KeepTruckin just leased 68,000 sq. in the fourth quarter of 2019 and is now marketing the entire space as a sublease.

“With San Francisco edging in as the most expensive U.S. office market, companies are looking to mitigate their financial obligations since this sublet market can achieve market direct rents—though not always,” McShea says. At the very least, that sublet space can cover nearly 80 percent of what these companies are paying on their direct leases, he notes.

CBRE’s most recent forecast for the office sector indicates a downturn in average U.S. office rents overall, according to Anderson, but taking into account increases in sublease space, the rent drop should be no worse than during the recessions of 2001 and 2008.  “We will adjust our forecasts as the economic landscape changes, but there is no indication of a significantly deteriorated outlook,” he says.

Showers notes that only sublease offerings with extended terms and a sublessor with high-quality credit will impact market office rents as those offerings will compete directly with landlords for new requirements. Typically, sublease space does not have a combination of ample term and a quality-credit sublessor, he adds. “As such, the challenges with the space can render it non-competitive and have little impact on rates.”