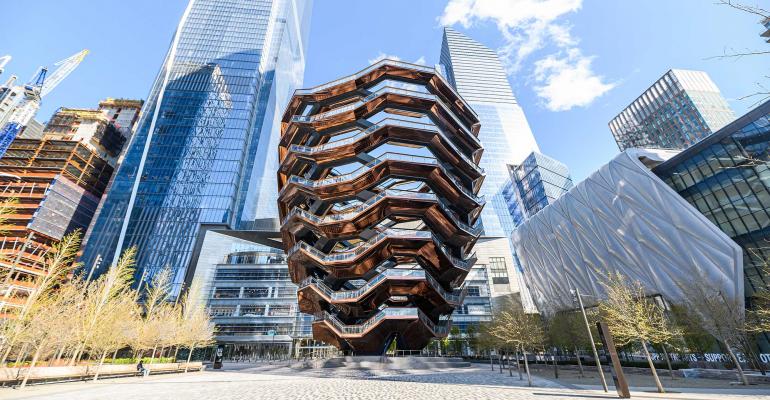 (Bloomberg)—Barclays Plc is interested in taking office space at Hudson Yards, looking west to replace their U.S. headquarters in Times Square, according to people with knowledge of the matter.

Barclays current U.S. headquarters is at the former Lehman Brothers building in Times Square. Barclays acquired the property as part of a deal to buy part of the investment bank’s U.S. operations in 2008.

Office leasing in New York has slumped this year, battered by a pandemic that has kept many corporate workers at home. But there are signs that companies are betting on a return to Manhattan. Facebook Inc. announced a lease in August for the entire office space at the Farley Building, a former post office near Pennsylvania Station.

Prior to the pandemic, Hudson Yards had reshaped Manhattan’s far west side, drawing high-profile financial and technology companies to massive new office towers.

“There is clear demonstrated demand for office space in that part of the city,” said Jeffrey Langbaum, an analyst at Bloomberg Intelligence. “I think this provides another data point that fears of the demise of Manhattan office buildings may be overblown.”

New York has been hit hard by the coronavirus outbreak, with the absence of tourists and office workers leaving Manhattan eerily quiet. Many buildings are still largely empty, with companies taking a cautious approach to bringing workers back after months at home.

Some of New York’s prominent landlords, meanwhile, have pressed large employers, including Goldman Sachs, Blackstone and BlackRock, to speed up the return.

So far, the pandemic has landed harder on retail property and hotels than it has on office buildings, where rent collection has remained strong.

Related Cos., the developer behind the $25 billion Hudson Yards project, which also features condos and a mall, has been marketing the shuttered Neiman Marcus anchor retail space as potential offices to tenants in recent weeks.

The interest in offices at the Hudson Yards “speaks to the advantage that new, highly amenitized buildings located in close proximity to commuting hubs may have over older, less well located properties in attracting tenants,” Langbaum said.

--With assistance from Stefania Spezzati and Sridhar Natarajan.