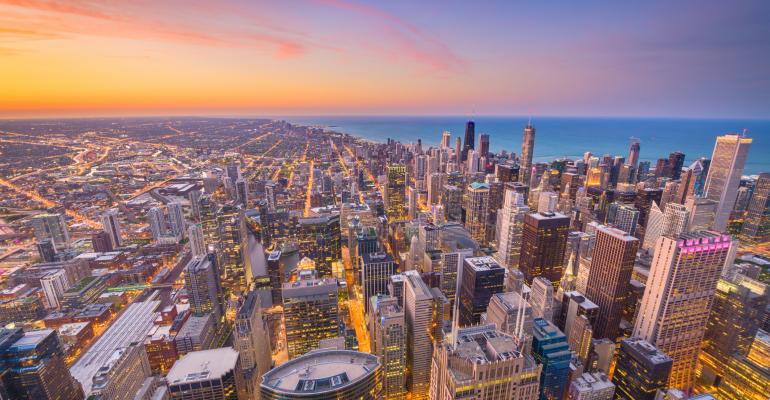 Chicago Is the Greenest Place to Work in America

More than 71 percent of the city’s office space has been certified green.

(Bloomberg)—Chicago is the greenest place to work in the U.S., but other cities are trying to catch up fast.

The Windy City topped a ranking of green office space certified for environmental efficiency for the third year running. The city’s percentage of certified green office space rose to 71.1%, up from almost 70% last year and 66% two years ago, according to an annual ranking by CBRE Group Inc. and Maastricht University on Friday.

Chicago, which has topped the list since CBRE started publishing it in 2017, has a goal of having 100% renewable energy in all city-run properties by 2025, and its own clean energy rating system for buildings. About 42.2% of all office space in the 30 biggest U.S. markets is now certified green, according to CBRE.

“The next frontier is going to be taking these older buildings and finding ways to make them green and sustainable,” said Spencer Levy, chairman of Americas Research for CBRE, noting the ranking likely benefits cities where there are more new office buildings. “Chicago has some of the oldest office property in the U.S. and you are starting to see more complete retrofits,” Levy said. “These green incentives draw tenants.”

The ranking selects buildings that are Energy Star certified by the U.S. Environmental Protection Agency or have a LEED rating from the U.S. Green Building Council’s Leadership in Energy and Environmental Design program.

New York Governor Andrew Cuomo this week said the state gave $18 million to 28 green building design projects to reduce the effect of buildings on the environment.

The state wants to increase its carbon-neutral building stock to reach a goal of 85% emissions reduction by 2050. Mayors of cities around the world have also focused on pushing new buildings to have net-zero emissions and ultra energy efficiency. Buildings in urban areas account for at least half of greenhouse gas emissions in most cities, according to C40 Cities.

To contact the reporter on this story: Emily Chasan in New York at [email protected].

To contact the editors responsible for this story: Janet Paskin at [email protected]