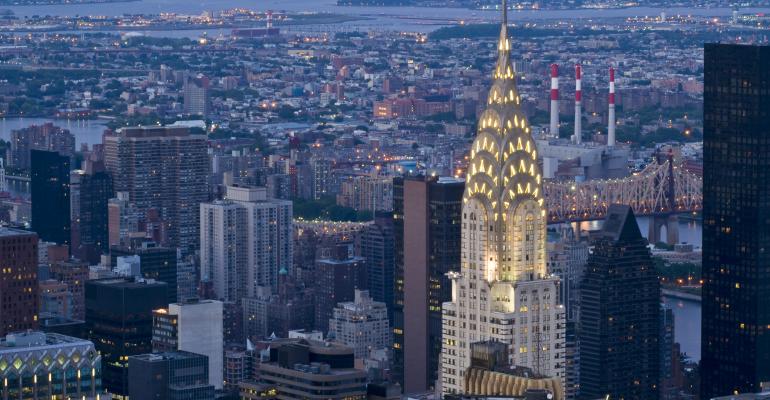 The building, with its columned space and need for renovations, is a value-add play for the buyers, experts say.

The Chrysler building sale, which was announced earlier this month, offers a limited read on property valuations in the larger Manhattan office market, according to industry experts.

Aby Rosen’s RFR Holding and Austrian real estate firm Signa Holding agreed to purchase the building for around $150 million, a price approximately 80 percent below the $800 million Abu Dhabi Investment Council paid for a 90 percent stake in the skyscraper in 2008, according to the Wall Street Journal.

“First was its status as a historical landmark, which adds some hurdles to conducting renovations on the space. Second, is the ground lease for the building, which recently ratcheted higher and is slated to increase further in the future,” says Chris Muoio, senior quantitative strategist at Ten-X Commercial, an online real estate marketplace. “These, combined with more modern space in Hudson Yards coming on-line, created a uniquely weak pricing environment.”

With Hudson Yards, One Vanderbilt and any of the towers proposed for the Grand Central Terminal area coming into the market, the first challenge for the new owners of the Chrysler building will be to modernize the space in order to attract tenants, according to the experts.

“Not all corporate users with big teams like that kind of space… with the columns in the way,” says Jim Costello, senior vice president at Real Capital Analytics (RCA), a data and analytics firm. “So, to get tenants in there, it will require some [capital expenditures], which can be difficult to manage sometimes in a [joint venture] structure. In a case like that, may make sense to book all the income you have taken along the way, sell the asset for what you can and let someone else with experience repositioning things take over.”

According to RCA data, average cap rates on transactions involving Manhattan office properties were around 4.45 percent in 2018, up from 4.3 percent the year prior. Average price per sq. ft. was approximately $968, down from almost $982 per sq. ft. in 2017.

The building has challenges that the partnership structure in place was ill-suited to handle,” says Costello. “Income from the building is scheduled to drop sharply as the ground lease escalates to a level that was negotiated back in the middle of the housing boom, when some investors expected rents to escalate 10 times the values seen in that period.”

The land under the Chrysler building is owned by the Cooper Union. Last year, the school raised the annual fee to $32.5 million from $7.75 million, according to its financial statements. The rent will rise again to $41 million in 2028 and then again to $55 million in 2038.

“I would not describe this sale as a fire sale price. The new owners face a lot of [capital expenditure] costs at a time of falling income,” says Costello. “This transaction is essentially a value-add to opportunistic type deal in terms of the additional capital which will be required to be committed to the asset.”

Office space use has shifted towards more open floor plans and co-working space during this cycle, with less of a need for storage space due to the rise of cloud computing. Older spaces failing to accommodate these layouts will be at a competitive disadvantage in attracting tenants, according to Muoio. In the current leasing market, the Chrysler building is an older asset compared to the new competitors with more usable floorplates. The Chrysler building was completed in 1930 and totals 1.2 million sq. ft. The building is currently 20 percent vacant, according to Barbara Byrne Denham, senior economist in the research and economics department at research firm Reis Inc.

State of the office market

Average office rents in New York increased by 2.8 percent in 2018, after rising only 0.6 percent in 2017, according to Denham. The firm forecasts continued, but decelerating rent growth in 2019 and 2020 due to an influx of new office space.

In 2018, 3 WTC and 55 Hudson Yards opened, along with a few smaller buildings that added 4.75 million sq. ft. of office space to the market, the most non-owner-occupied newly constructed properties since the 1980s, according to Denham. Next year, another 4.25 million sq. ft. is expected to be completed, including 30 Hudson Yards and One Manhattan Square. A completed 1271 Avenue of the Americas will also re-open, along with several new properties in Brooklyn and Queens. All these new buildings added to New York’s office stock will keep rents from rising, according to Denham.

“Other transactions will achieve high prices I think,” says Costello about office buildings sales in Manhattan. “New York is a still a market where global capital likes the yield story over a long period of time.”