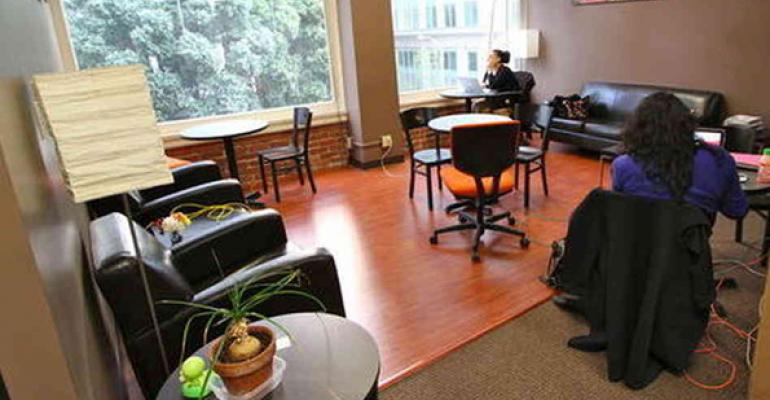 Coworking companies are capturing demand from tenants looking for short-term and flexible space, and office building owners want in on the business.

An increasing number of office landlords are offering flexible options to tenants who desire temporary space or a lease commitment of less than three years. A new report from LiquidSpace, an online transactional platform for linking office tenants with flexible opportunities, noted that more than 30 percent of public listings on LiquidSpace come from businesses sharing excess space, but building owners have jumped into the mix and now account for 7 percent of listings—double the amount a year ago.

“The opportunity to provide flexible space has gotten large enough [that] it’s now on landlords’ radar screen,” says Mark Gilbreath, founder/CEO of LiquidSpace. According to Gilbreath,  companies using LiquidSpace include large, creditworthy tenants seeking flexible, creative space for teams of 15 to more than 100 members who are working on special projects or entering new markets and are unsure of future space needs.

WeWork, Regus, Industrious and other coworking companies are capturing demand from this market, and office building owners want in on the business, he notes.  “WeWork, for instance, recently opened a 90,000-sq.-ft. WeWork in downtown San Diego—the largest WeWork in Southern California.”

Jon Slavet, WeWork general manager on the West Coast, notes that this location already has a team of 40 and is expecting to add regional headquarters of large, branded companies. The San Diego facility occupies three full floors with space that can be reconfigured to accommodate up to 500 employees for companies that make a two- or three-year commitment.

Colliers International’s Ryan Hoopes, senior associate for flexible workspace advisory services, says his group is seeing a lot of interest in flexible office space from local, regional and institutional landlords and is advising clients to include flexible space in their portfolios. While the number of office landlords entering the flexible market is rising rapidly, Hoopes believes it is just the tip of what’s to come.

He notes that landlords are creating flexible space independently using mechanisms such as LiquidSpace’s altSpace initiative, a pre-built, modular office strategy. Landlords are also partnering with third-party co-working operators to establish flexible space in their buildings, agreeing to share risk along with revenue.

“Big owners want to provide flexible space to incubate early-stage tenants as they grow,” Hoopes says. For example, Dallas-based value-add investor Quadrant Investment Properties is creating an altSpace at The Centrum building in Dallas, a 400,000-sq.-ft., $25 million redevelopment Quadrant will complete in mid-2017, for an online marketing platform. This is Quadrant Investment’s first venture into the flexible space segment of the market.

The tenant wanted to consolidate 65 employees under one roof, but only wanted to commit to a three- or four-year deal because the office is growing and it will eventually need additional space, notes Chad Cook, Quadrant Investment Property founder.

The altSpace team of workplace designers and furniture providers is configuring a flexible office environment in a raw, 19,000-sq.-ft. space in The Centrum, he adds. Cook notes that the modular design allows users to configure a variety of common spaces within the work area, creating the potential for a denser arrangement as the company grows.

The report notes that ubiquity of high-speed WiFi, mobile devices, video conferencing, cloud computing and collaborative software has provided employees the freedom to work from various locations, reducing the number of people working at the same time in the same office.

In today’s environment, office users can find themselves using only 40 percent of their desks, so companies are realizing they may not need all of the space they are leasing, according to Andy Liverman, LiquidSpace director of product marketing. He adds that some landlords are leveraging space occupants shed to establish flexible space.

Hoopes is currently seeking flexible workspaces for a multimarket corporate tenant in Santa Monica, Calif. and the Boston area. The workspaces are meant to help the tenant attract and retain programmers, one of the most sought-after professionals today. “My client wants to give his programmers as much flexibility in where and how they work as possible, but doesn’t want to pay for more space than is needed,” Hoopes says.

Space in co-working facilities is “move-in-ready” and includes WiFi; a full-range of amenities; and the flexibility to rent space by the hour, day, month or year. That convenience, however, comes at a 181 percent premium. Shared offices cost about $139 per sq. ft., compared to the average rent of $49.59 per sq. ft. for traditional class-A office space, according to a JLL Shared Workspaces report. As more landlords enter the flexible marketplace, the report noted that they will present competition for co-working operators, and rents are likely to become more competitive.

What makes flexible office providers successful is the ability to offer quick delivery of move-in ready, functional workspace, she says, noting that altSpace is a cost-effective, plug-and-play solution. It can be move-in ready immediately because unlike custom-designed build-outs it does not require permits, inspections or other governmental processes that delay occupancy.

The Liquidspace report also notes that U.S. office stock is aging, with more than 70 percent of total office space located in buildings built before 1980. As owners look for ways to revitalize and reposition older buildings, Liverman says they are finding flexible office conversions can attract desirable tenants.