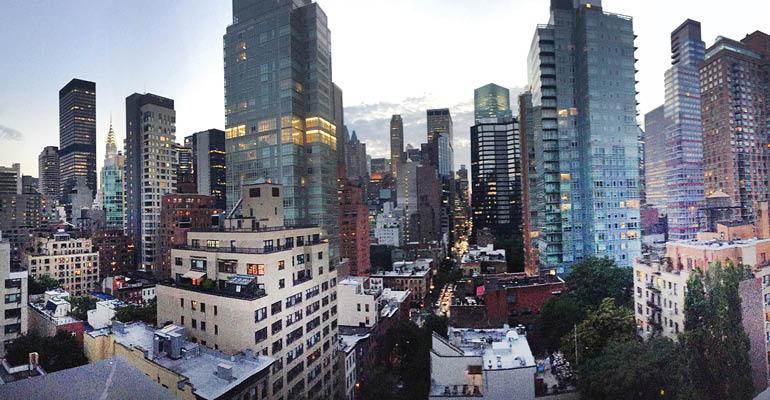 New leases in the city sank to lowest first-quarter level since 2009.

New leases in the city, the epicenter of the outbreak in the U.S., sank to the lowest first-quarter level since 2009, according to Newmark Knight Frank. The collapse came in March, when businesses shut down to stem the spread of the virus.

Now, a market that was already facing a surge of new offices is dealing with an existential crisis. With the economic fallout mounting, companies are delaying expansion plans and nixing new leases as they ponder how much space they’ll need in post-pandemic New York.

“The deals that I was on died pretty fast around the time when everything went dark,” said Dena Cohen, a partner at law firm Herrick Feinstein. “People just stopped. A lot of deals either died or are on hold.”

The crisis has weighed on the shares of SL Green Realty Corp. and Vornado Realty Trust, two of the city’s largest landlords. Together, the companies have seen more than $5 billion in market value evaporate since the beginning of March. Vornado was cut to sell by an analyst at Stifel on Wednesday.

Vornado is spending more than $2 billion to transform the area around Pennsylvania Station with retail shops and new offices. Steven Roth, the real estate investment trust’s chief executive officer, said new leasing in New York has “slowed to a trickle” and it could be a while before business bounces back.

“This next year or so will be very challenging -- a lost year, a tragic abyss,” Roth said Tuesday on a conference call.

Deals that have been in the works for months are falling apart, or at least being paused indefinitely. The brokerage Avison Young was working on a lease for offices in Manhattan for nearly nine months only to see the tenant back out last week, saying they wanted to wait a few months to see how the market develops.

New York landlords argue that offices remain essential for productivity and that companies will send employees back once the pandemic ebbs. So far, rent collection on offices has held up better than it has for retail properties. Still, workers are adjusting to being at home and companies grappling with an economic downturn could think twice about new leases.

The outbreak hit with more than 16 million square feet of new offices under construction in New York, with a quarter of that expected to be completed this year, according to Newmark.

The average office rent in New York hit a record in the first part of 2020, according to Newmark, pushed higher by companies taking space at expensive new buildings. Now, it’s hard to even determine market prices, according to Owen Thomas, CEO of Boston Properties Inc.

Falling rents would cascade through the industry and “spell trouble for the remaining space that requires some pretty expensive rents to make the developments profitable,” according to Daniel Ismail, an analyst at Green Street Advisors.

Banks and finance companies have long been the largest office tenants in New York. But with the industry adapting to work from home, it could be months before offices reopen. Morgan Stanley CEO James Gorman said last month he can imagine a future with “much less real estate.”

New York is also taking a hit as the office-sharing industry struggles to find its footing following the collapse of WeWork’s IPO last year. Co-working companies lease more than 14 million square feet of space in Manhattan, about 3% of the total inventory. WeWork takes up more than half of that share, according to Savills.

New York had also solidified its status as an emerging hub for large technology companies in recent months. Landlords have been counting on the tech boom to fuel demand for office space. Google, which has fueled tech’s expansion in Manhattan, recently pulled out of West Coast real estate deals.

In New York, more leases could be scrapped as the city struggles to rebound and companies that have adapted to the new normal rethink their office footprints.

“Now that we’ve had this experiment that’s worked reasonably well for most companies, do we really need to have everybody come back into a conventional office setting?” said Jim Underhill, CEO of commercial real estate firm brokerage Cresa. “By and large, the answer is no.”

To contact the reporter on this story: Natalie Wong in New York at [email protected].