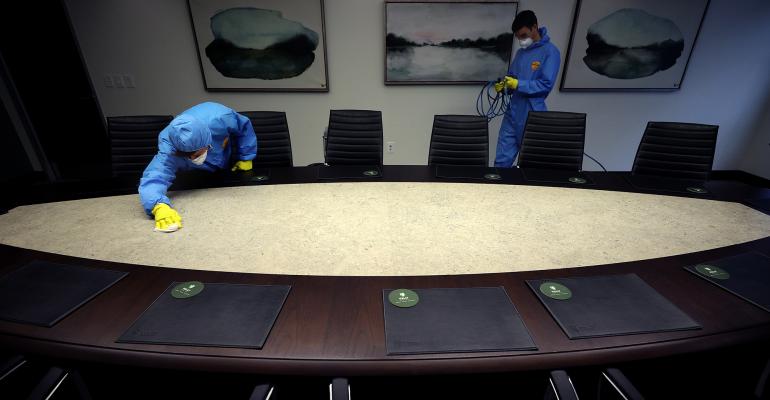 Office Building Health and Safety Now Requires Extra Spending. But Who Will Foot the Bill?

Depending on lease terms, expenses related to COVID-19 might fall on the tenants and not office owners.

Costs around maintaining health and safety in office buildings are set to increase, but whether these added costs will fall on the tab of owners or tenants will largely depend on the leases.

“There is no question operating expenses for 2020 have increased,” says Randy Fink, managing director with real estate services firm JLL. In the short term, however, JLL’s investor clients are seeing two intersecting trends. On the one hand, they have had to increase spending on COVID-19-related supplies, such as hand sanitizer and stepped up cleaning of office common areas. On the other, they have also seen reduced spending on utilities, trash pick-up and repairs due to fewer people being in the office.

“We’re also seeing electricity meter readings decrease as a result of people not entering the buildings in those central business districts. This will continue as long as the number of people in buildings remains low,” says Fink.

Incremental operating costs for office buildings could increase by at least $19.40 per sq. ft. or 5.8 percent of average annual office rents at the beginning of 2020, according to a recent report from consulting firm Deloitte. These incremental costs could vary based on the measures taken at each property and the quality of materials used. But whether these added costs are the responsibility of the owner or the tenant will largely depend on the  terms outlined in each lease.

“In office leases, most leases specify what kind of cleaning is going to be performed every night and that’s typically defined as standard cleaning,” says Grayson Gill, chief operating officer of U.S. property management with real estate services firm CBRE “That cleaning is typically dusting, trash removal, vacuuming, it doesn’t really have anything to do with disinfecting. So, disinfecting is really an above standard cleaning, and that’s a defined term in those leases, and that cost is the cost of the tenant, not the owner.”

In the long term, as people return to offices, cleaning costs may increase for items like additional daytime cleaning personnel, self-cleaning surfaces and signage, as well as indoor air quality measures,notes Fink. He adds that cleaning costs may increase by up to 25 percent, depending on what is involved. Successful strategic sourcing will become a competitive edge for larger landlords who can leverage their scale to manage these extra expenses.

Office owners should generally be able to make up for additional health and safety measures through these occupancy-related savings like lower utility bills, says Fink.. Gill adds that because there are relatively few peoplee in office buildings right now, “you maybe pay half of your elevator costs for maintenance because they are not running.” Trash removal costs are down as well.