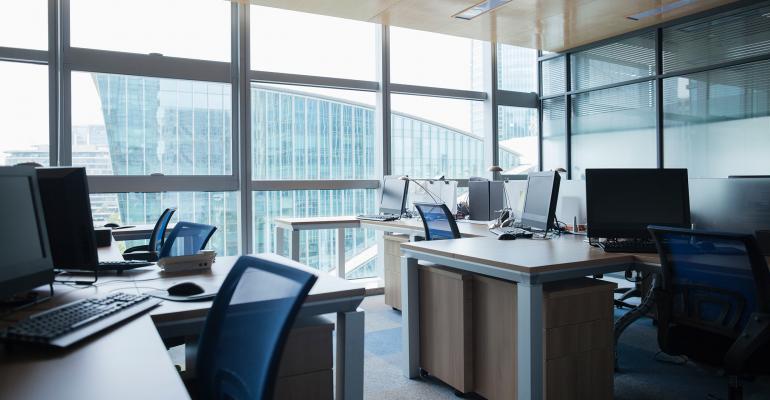 There are many office jobs that can’t be done remotely.

(Bloomberg Opinion) -- I returned to the office this week, joining thousands of bankers from Citigroup Inc. to Morgan Stanley that are trickling back to their desks in Hong Kong. After almost five months working from home, it's going to take some getting used to.

The easing of coronavirus lockdowns heralds the beginning of the end for the world's greatest work-from-home experiment. Perhaps. Twitter Inc. will let employees work from home permanently even after the outbreak recedes, while others such as Google have said staff should expect to stay away for the rest of the year. The upheaval caused by the pandemic has caused many to question whether we will ever return to business as usual, giving rise to headlines such as “the death of the office.” I have my doubts.

My initial reaction at being told to stay home in January was panic. With two teenage daughters about to start online schooling and a husband who would also need to work from home, I struggled to see how our crowded 47th-floor apartment would cope. I’d had a taste already, when the office became all but inaccessible for several days during the height of Hong Kong’s protests last year, so I knew what we were facing. Over the following, fractious few months, I have jostled for space on the dining table, mediated disputes between the girls, and tussled over the yoga mat — a crucial stretching prop for laptop-induced shoulder strains, as well as an essential accessory for online PE classes.

Somewhere along the line, I grew to like it. I'll miss the home-work experience, when it finally ends (like many other companies in Hong Kong, our return is on a split-team basis, so we aren’t back at the office full-time yet). The family has bonded more tightly as a result. I’ve grown accustomed to the home-office rhythm, acquiring some admittedly unhealthy habits along the way — such as snacking on Cheetos, bingeing on TV news channels, and reading the obituaries.

I’m in the minority, though. We’re fortunate in having more living space than most. In a city such as Hong Kong, which is densely packed with tiny apartments, it’s simply not viable for many people to work from home indefinitely. The average apartment size is 40 square meters (430 square feet) compared with 137 square meters in New York City, according to Jones Lang LaSalle Inc. Many employees just don’t have the room to set up a home office. And living in such cramped quarters, they need to get out regularly.

The cost-benefit equation for Hong Kong is skewed. With urban areas being closely packed and the subway system efficient, getting to the office is quick and easy for most people. It may be a different story in the U.S., where cities sprawl into the suburbs, commute times may be long, and public transport is often less reliable. Or in Asian metropolises such as Mumbai, which is densely packed but plagued with horrendous traffic congestion and a  more than 150-year-old train network that make suburban working attractive.

That’s not to suggest that Hong Kong will escape any long-term impact from Covid. Macquarie Group Ltd. is among companies that have already decided to cut space in the city’s skyscrapers. Other financial services firms can be expected to follow.

Still, there are many office jobs that can’t be done remotely. At most, 30% of bank employees in the city can work from home, Bloomberg Intelligence analyst Francis Chan estimates. “In industries that thrive on information flow and speed, like sales and trading, you may see back offices and compliance work from home but traders will likely have to go back even if they already have three screens at home,” said Parijat Banerjee, a financial services consultant at Singapore-based Greenwich Associates.

In any case, most people don’t want to get rid of the workplace, HSBC Holdings Plc analysts James Pomeroy and Davey Jose wrote in a report titled "Leaving the City." They just don’t want to be there all the time. That broad conclusion applies across all developed markets where the technology is adequate to enable remote working, Pomeroy said.

Ultimately, offices are more than just a place to do business — like the cities that surround them, they are meeting points for social and cultural exchanges. Humans are social animals, and we need more contacts than those our immediate family provide.

That’s a thought that resonated with me this week as I surveyed the near-deserted pantry at Bloomberg’s central Hong Kong offices, a space that was typically heaving with people and animated conversations before the pandemic. A return to normality can’t come soon enough.

To contact the author of this story:
Nisha Gopalan at [email protected]

To contact the editor responsible for this story:
Matthew Brooker at [email protected]