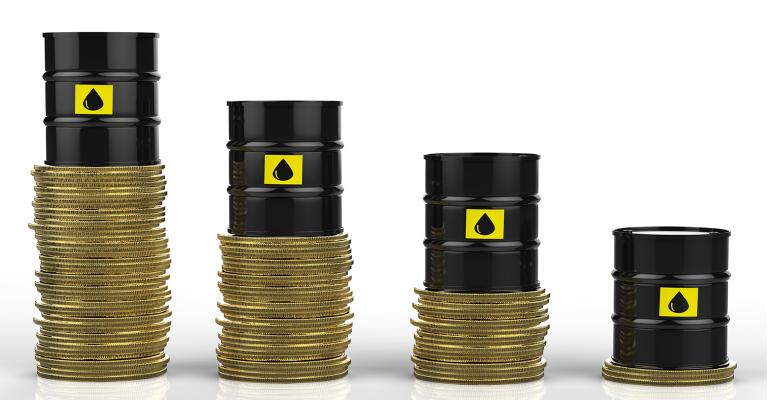 Oil Prices Have Plummeted. Houston Office Landlords Are Bracing for a Long-Lasting Fallout.

The next year will likely flood oil markets like Houston and New Orleans with office sublet space. But some investors may benefit.

Oil prices bumping along at low levels are likely to result in a glut of sublet space in Houston and other energy-dependent office markets. They may also give cash-rich investors an opportunity to buy class-A assets at “rock bottom prices.”

A drastic drop in demand for oil due to the COVID-19 pandemic, combined with an oil price war, has rankled oil markets. Prices for oil slated to be delivered in May briefly dropped into negative territory, bottoming out at neary -$40.00 per barrel last week, before recovering some. As of Thursday, prices were closer to $20 per barrel. Still, that's well below the more than $60 per barrel oil was feting at the end of 2019.

There were approximately 465 drilling rigs operating in North America last week. Almost all the operators are laying those rigs down as fast as they can because there is no profitable market for the oil today. The few rigs that will still be drilling in the next few weeks are doing so only because they have no choice, as their leases would lapse if they stopped, notes Houston-based Bruce Rutherford, international director with real estate services firm JLL who leads its global energy practice group.

The price of oil must be between $25 to $30 per barrel to break even on production costs, so when the price falls below that, producers may as well shutter their wells, according to Patrick Jankowski, regional economist and senior vice president of research at the Greater Houston Partnership.

Global shutdowns in response to the spread of COVID-19, in combination with an OPEC price war, have resulted in a huge oil glut, causing crude oil buyers to cancel contracts and forcing some investors/traders to pay to have their excess oil supplies hauled way. For a few days, crude oil prices entered negative territory.

As a result, U.S. oil producers nationwide—from California to Pennsylvania—dialed back on drilling, causing layoffs or furloughing of workers directly engaged in the energy industry, as well as those indirectly dependent on it, from attorneys and engineers to services, equipment providers and restaurant workers, notes Rutherford.

Prior to March, the oil and gas industry provided 235,000 Houston jobs, or one in every 10 jobs in the region, but one in four jobs in Houston is directly or indirectly tied to the energy industry, according to Jankowski. About 30,000 energy job layoffs are expected in that city alone, equal to the number of jobs that returned following the 2014-2017 oil price crash, according to Houston-based Tyler Garrett, senior vice president specializing in office leasing with real estate services firm Transwestern.

Rutherford says, however, that so far, the energy industry has only laid off about 9,000 workers in Texas, about half of them in Houston.

The 9,000 energy layoffs reported did not include firms with less than 500 employees, according to Rutherford, who notes that there are more than 6,000 independent oil producers in Texas, most with fewer than 500 employees. Seventy-five percent of those firms are expected to go bankrupt. And while the vast resources of major energy players, including Exxon-Mobile, BP, Shell and Chevron, largely insulate them from the oil-price crisis, “There isn’t a middle manager or mid-level executive (in the energy sector) who isn’t worried about losing their job.”

For the moment, more workers may have been furloughed than laid off, Rutherford says. He notes that following the 2014 oil-price crisis, the industry invested significant capital in technology to computerize or automate production in the field, refineries and petrochemical manufacturing. While this reduced the number of workers needed, it required more highly educated or trained workers than previously, so the industry cannot afford to lose them altogether. Those are the workers who were furloughed and may be paid to work two to three days a week.

As a result of the current situation, Rutherford predicts a significant increase in the amount of sublet space in Houston over the next 60 days, which could boost total sublet space available in the city to 10 million sq. ft. “Prior to March, the Houston office market’s first quarter was on pace for positive absorption,” he says. Since the quarantine, however, occupiers have been offering new sublet space.

“Over the last three weeks, we’ve also noticed an attitude change in landlords, who had been ‘whistling past the graveyard,’” Rutherford adds. He suggests that well-capitalized landlords like Brookfield are to an extent insulated from current market conditions, but smaller, entrepreneurial landlords will feel some pain. The Houston office market never fully recovered from the last oil-price drop in 2014-2015, which resulted in 13 million sq. ft. of sublet space being put on the market, with 5.9 million sq. ft. still remaining.

Other oil-exposed office markets, including New Orleans, Denver and Oklahoma City, will also be impacted by the drop in oil prices, but it will have little impact on office markets like Pittsburgh, because its energy exposure is to natural gas production rather than to oil. In fact, natural gas demand may increase while people are sheltering at home, as it is used to heat homes and power home appliances.

Oil prices, meanwhile, aren’t expected to rise to a profitable level for at least 12 to 18 months, Jankowski notes. “Bottom line, oil will be depressed until demand rises. That won’t happen until people go back to work, and that won’t happen until there is widespread (COVID-19) testing, so people feel safe going back into an office,” he says.

Meanwhile, Rutherford says that with a recession looming and office market suffering, “investor companies with strong balance sheets and good underlying business may have a once-in-a-generation opportunity to pick up great real estate at rock-bottom prices.”