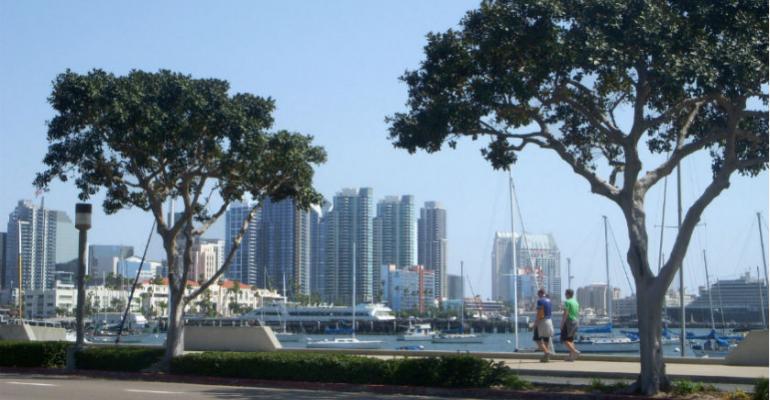 Is San Diego the New San Francisco? Why CRE Investors Should Keep an Eye on the City

It may only be a matter of time before San Diego’s rapidly expanding tech sector develops into Southern California’s answer to Silicon Valley.

In 1985, UC San Diego Professor Irwin M. Jacobs and his six business partners founded telecommunications company Qualcomm in San Diego. It was an exciting time for cutting-edge tech in the Golden State—Sun Microsystems and Cisco Systems had popped up in the Bay Area in 1982 and 1984, respectively, and Apple had just unveiled its groundbreaking Macintosh computer. For a moment it appeared that San Diego might join its northern neighbors at the epicenter of the digital revolution.

Alas, this never came to pass, and over the last three decades, San Diego has become known more for its pristine beaches, unbeatable year-round weather and massive naval base than for its high-tech industry. That said, America’s Finest City has always had the requisite infrastructure to realize the potential embodied by Qualcomm. The area is home to a number of well-regarded universities—Jacobs’ UC San Diego among them—as well as the internationally respected Scripps Research Institute and Salk Institute for Biological Studies. In short, San Diego’s intellectual capital has never been in short supply—it simply hasn’t been given the chance to thrive.

That’s finally starting to change. While it’s still too soon to place San Diego on equal footing with the nation’s leading tech hubs like the Bay Area and Seattle, recent trends in the city’s commercial real estate market indicate that San Diego may be the office market to watch for tech-focused investors.

When one bubble burst, another took its place

In an effort to contextualize San Diego’s nascent tech sector, we used Reonomy’s proprietary datasets to compare the city’s recent commercial real estate trends to the trends seen in San Francisco during the early days of Silicon Valley’s recovery from the dot-com crash.

Its adverse effects notwithstanding, the 2000 crash actually ended up paving the way for the rise and/or reinvigoration of a number of truly transformational tech companies. In 2001, Apple launched the first iPod and PayPal emerged from the merger of Confinity and X.com. Three years later, Google issued its IPO and Mark Zuckerberg moved Facebook headquarters to the Silicon Valley. The year after that, YouTube was founded—and, just 19 months later, purchased by Google for a staggering $1.65 billion—and Tesla developed the first automobile run on lithium-ion battery cells.

This boom in new tech industry power players had a profound effect on San Francisco’s commercial real estate market. The number of multifamily sales skyrocketed by 69.3 percent between 2001 and 2002, after which they held relatively steady until 2006. Despite this rapid increase in new development, the median sales price of multifamily assets in San Francisco grew by 50.7 percent between 2001 and 2005, including massive 16.8 percent and 18.9 percent year-over-year increases between 2003 and 2004 and 2004 and 2005, respectively.

Growth in the office sector was even more pronounced, with total sales increasing by 133 percent between 2001 and 2005. In fact, 2005’s 286 office-related transactions set a mark that has only been surpassed once—in 2007, on the eve of the Great Recession, just over 300 office assets changed hands. The period between 2001 and 2005 also saw the median sales price of office assets in San Francisco increase by an impressive 400 percent, an upward trend that, with the exception of a brief downturn during the recession, has continued ever since.

Not your padre’s San Diego

The current—and ongoing—expansion of San Diego’s commercial real estate market has been nearly as impressive. The median sales price of multifamily assets has increased every year since the city started to recover from the recession, and as of 2017 sat at a mark 164 percent higher than in 2010. Though slightly more modest, multifamily property values have enjoyed encouraging growth in recent years as well—growth that can be tied directly to the city’s tech boom. Driven by year-over-year increases greater than 13 percent in three of the last four years, the median sales price of multifamily assets in San Diego grew by 43.1 percent between 2014 and 2017.

On the office side, the median sales price in San Diego jumped by nearly 230 percent between 2014 and 2017, all while total sales volume stayed relatively steady. While we need to wait for 2018 (and 2019) figures to confirm the trend, last year may well have been a landmark year for San Diego’s office sector, as the median sales price finished 95.2 percent above its 2016 mark.

A CRE market not about to lose its charge

If not quite of the magnitude of San Francisco’s near-unprecedented growth in the early 2000s, the ongoing expansion of San Diego’s tech industry is nevertheless a strong indicator that the commercial real estate market is poised for continued growth.

And with the STEM-oriented educational infrastructure outlined above and a five-year millennial population growth rate (at 5.5 percent) more than double the national average (2.6 percent), San Diego is well-positioned to continue its transformation into a bonafide tech hub—a SoCal San Francisco, if you will.

Richard Sarkis is the CEO of Reonomy, a provider of commercial real estate property data.