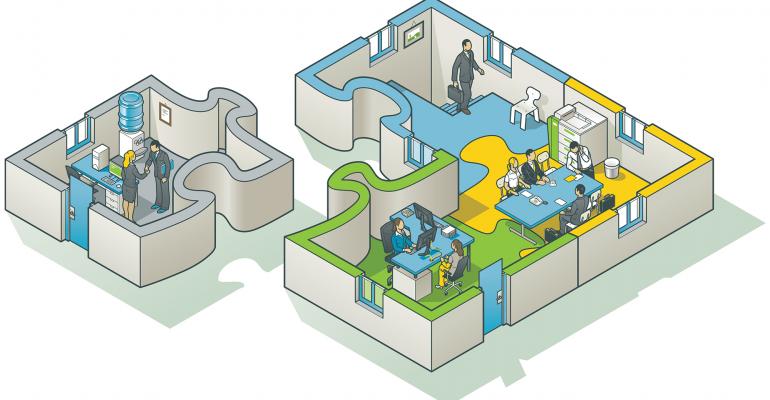 As Some Office Tenants’ Leases Expire, They Are Opting to Consolidate in Fewer Locations

COVID-19 is making companies reevaluate their office space needs. Some are opting for consolidation.

Insurance giant AIG recently announced that it will keep its headquarters in New York City, but is moving next year from the Financial District to Rockefeller Center at 1271 Avenue of the Americas, where the company will occupy 325,000 sq. ft. on eight floors. The company, which currently operates multiple office locations citywide, will also consolidate its footprint into two locations that include the Goldman Sachs Tower as well.

This announcement was a shot in the arm for Midtown Manhattan, which is experiencing flight by wealthy professionals to the suburbs and vacation homes in the Hamptons, reportedly leading a number of Wall Street firms to look for suburban easy-access outposts post-COVID-19, notes Dallas-based Byron Carlock, real estate leader for the U.S. real estate practice with consulting firm PwC.

As a short-term solution, “Suburban or ‘exurban’ nodes are being heavily weighted in boardroom scenario planning, especially from the standpoint of retention of top talent and buying time, as we all watch how the vaccine development process comes into play,” says Illinois-based Robert Hess, vice chairman of consulting in the global corporate services group of Newmark Knight Frank.

However, this is likely to be a short-term trend, according to Dallas-based Jeff Eckert, president of U.S. agency leasing with real estate services firm JLL. Primarily, that is because of a lack of corporate-grade, new speculative development available for lease in most suburban locations. But the geographic centralization of such markets also makes suburb-to-suburb commuting difficult to scale.

On the other hand, he notes, “Corporate consolidation into a single location has been widespread throughout the current cycle, particularly for headquarter locations, often as part of a broader strategy of flight-to-quality and in certain cases, movement of back-office functions to lower-cost markets, while maintaining a gateway presence for C-suite, client-facing, and high-productivity functions.”

Among recent, large-scale consolidations, Eckert cites PG&E in Oakland, Calif., Duke Energy in Charlotte, N.C. and Nielsen in Chicago. “Similarly, AIG will be streamlining its New York footprint into just two offices, along with PwC consolidating from five to two offices in Metro D.C.—one in D.C. and the other in Virginia. In these cases, space constraints, commuting patterns and client proximity needs required maintaining more than one office, but still meet the objective of footprint reduction.”

Eckert notes that will be a trend moving forward, as further cost pressures mount on users in high-cost geographies.

Consolidations, particularly into new properties, enable a step change in efficiency and reduction in cost per employee, he says. “Although COVID is likely to lead to de-densification efforts depending on the trajectory of the pandemic and company-by-company needs and sentiment, this will be offset by a segment of the working population remaining remote or hot-desking/rotating in the interim.”

“Over the longer-term, companies are likely to opt for one main office location and greater flexibility as a perk,” he notes. “The need to onboard new employees effectively, as well as provide mentorship opportunities and maintain collaborative culture, will keep offices a focal point.”

According to Hess, if a company’s leases are set to expire in the next few months it could serve as a catalyst for consolidation.

JLL reports that the top U.S. office markets are experiencing a collapse in leasing activity, with leasing volume dropping by 20.8 percent in the first quarter and 53.4 percent in the second quarter.  According to CBRE’s second quarter 2020 office report, leasing activity was down 44 percent year-over-year, increasing the national office vacancy rate by 70 basis points to 13 percent.

Moody’s is predicting that vacancy will rise to 20 percent in the Big Apple and rents could drop by as much as 25 percent. Office vacancy in San Francisco vacancy is expected to reach nearly 13 percent, with 13 percent drop in rents.

But this type of situation can often breed opportunity, according to Poireir, and occupiers are using this time to optimize their portfolios. “This is a time of reflection for companies,” she says, noting that occupier clients are considering location and space needs based on employee headcounts and/or efficiencies, and some are contracting space, while others are expanding. For example, a New York-based bank in the mist of growing business on the West Coast has continued to expand its footprint, she says.

Companies with expiring leases are “pushing the pause button” or asking for short-term leases to wait and see what happens with the economy and how the future unfolds before committing long term. In addition, she says that downsizing tenants with longer-term commitment are offering a

portion of their office space for sublease.

The big takeaway is that the pandemic has opened up the conversation with clients to explore flexibility options across their portfolios, adds Poirier.