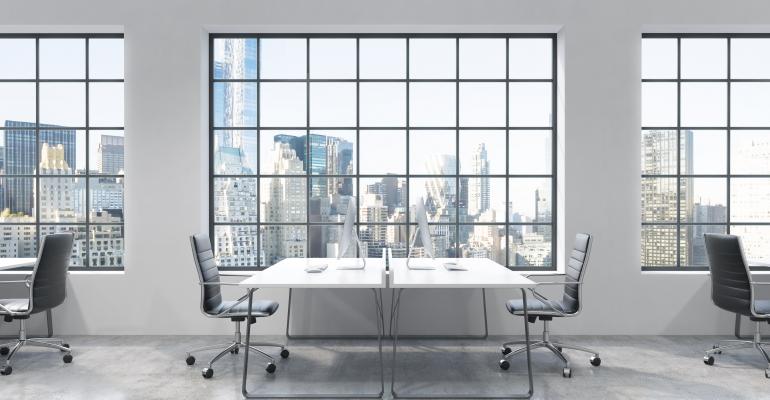 As Some Rebel against Shared-Space Offices, Experts Mull the Ideal Office Layout

Experts say there is a shift toward designing more flexible work environments that marry the need for spontaneous collaboration with the fact that people need their space, too.

The backlash against open office, shared-space seating—trendy for a range of industries looking to cut real estate costs—has been fierce and firm.

The criticism is valid, design and real estate experts say, as such workspaces, intended to spark teamwork, can bring distractions when workers need to focus on individual tasks. This, in part, may be why experts say there is a shift toward designing more flexible work environments that marry the need for spontaneous collaboration with the fact that people need their space, too.

The movement comes as companies continue to look for ways to cut down on operational costs, in part by reducing the ratio of desks to workers, while also keeping workers happy, says Lenny Beaudoin, senior director at real estate services firm CBRE who co-leads the workplace strategy practice. Office environments have changed from traditional places where employees have desks that they work at all day, to places that allow for movement. “That’s a huge change for people to make,” Beaudoin says.

There has been a rise of the flexible working space, or what Beaudoin calls an “unassigned collection of work venues” that feature individual, social and collaborative work spaces. Employees can use these spaces, typically managed by small teams or groups, on demand. What Beaudoin sees less of are offices with work-bench-style seating that was popularized 10 to 15 years ago. The motivation behind the idea—to spark collaboration—was a falsehood for many organizations: “People need balance between focused, individual work and social, collaborative work,” he says.

The idea of open space offices is a real estate game, as companies are trying to save money but make employees happy, says Daniel Hickey, president of Lane Office, a furniture distributor headquartered in New York City. While Hickey does not think companies will move back toward all-cubicle layouts, people who work in offices with bench-style, shared desks tend to find ways to manage the privacy—it’s human nature, he notes. Organizations may put up screens or other dividers, or employees may turn to listening to music, for example. “People are going to find a way to have that privacy,” Hickey says.

The goal should be to provide a mix of both private and collaborative social spaces, which prevent workers from seeing one part of the office as a space that does everything for them, says Chris Lambert, vice president of workplace strategy at Cannon Design. For example, during the phone interview for this story, Lambert, who is based in Chicago, noted that he was in a smaller enclosed space only 50 feet from his desk. “From our perspective, we think the idea of open versus closed is kind of a false choice,” Lambert says. “All work places need to have a mix of both kinds of spaces.”

The move toward such cubicle-less office spaces led to a decrease in private offices, which were viewed as less efficient in terms of real estate use  because they are not as collaboration-friendly, Beaudoin says. However, the notion of efficiency has stuck. Companies want to put more people into fewer work settings: “I think organizations are still trying to do more in less space,” Beaudoin notes. “They’re still trying to drive the efficiency.” For example, law firms are reconsidering their space needs, reducing their footprints by 27 percent on average from the first quarter of 2016 to the second quarter of 2017, according to a CBRE report.

Flexible work environments can still meet this goal, Beaudoin says. By offering less assigned space, companies can free up funds previously used toward real estate costs to provide other services and amenities for employees to boost morale, he says, noting that it is important for organizations to first understand the different functions for which employees utilize space. A smarter-designed environment has a trickle-down effect: when workers are more satisfied, they perform better, Beaudoin notes.

It’s an evolution that also stems, in part, from the change in how people work. In the early 2000s, the growth of technology allowed more people to work remotely. As a result, “it loosened the tie that people had to the physical environment,” Beaudoin says. However, companies recognized that there was still a need for face-to-face interactions, leading some to adopt more flexible workspaces, he notes.

The days when workers were chained to their desks or were having meetings in conference rooms are gone, says Randy Howder, co-managing director of design firm Gensler’s San Francisco office. And technology has played a big role—a lot of the firm’s clients do not even spend much time talking on the phone anymore, which can be a big source of distraction, he notes. “It’s a different dynamic,” he says.

Hyatt Hotels Corp., one of Gensler’s clients, recently underwent renovations at its Chicago headquarters. The firm went from a tenure-based private office and cubicle format to a layout that has an equal allocation of space, Howder says. Now, there is a mix of different spaces that can be used and reconfigured by teams as needed, he says.The shift started with technology companies, whose campus headquarters often feature the latest design innovations, worker amenities and integrated technologies. But co-working companies like WeWork popularized the shift—while allowing companies not to be locked into leases, Hickey says. Co-working spaces like WeWork offer amenities, services and more dynamic environments, which together “demonstrate a model for what a work environment might look like,” Beaudoin notes.

Co-working spaces also allow companies today to rent less space, making way for employees to have a meeting outside the office if needed, Howder says. And as workers travel, such access to memberships around the globe also helps companies, especially larger ones, that may want to enter a market on demand. “A lot of companies I think are really intrigued by that,” Howder says.

To help stave off employee unhappiness after any massive design change, preparation and research are key, Lambert says. Taking qualitative and quantitative data of how employees use and feel about their work environments can allow design experts to figure out ways to best utilize a space while taking into account the company’s business goals, he notes. Continual feedback from all levels of the organization during an office change can help people better adapt and thrive, especially as such changes are investments, Lambert says: “We’re trying to get people more acclimated to moving into a space before they move into it.”

A previous version of this article incorrectly described the business of Lane Office. It is a furniture distributor, not a design firm.
TAGS: News
0 comments
Hide comments
Related
Sponsored Content