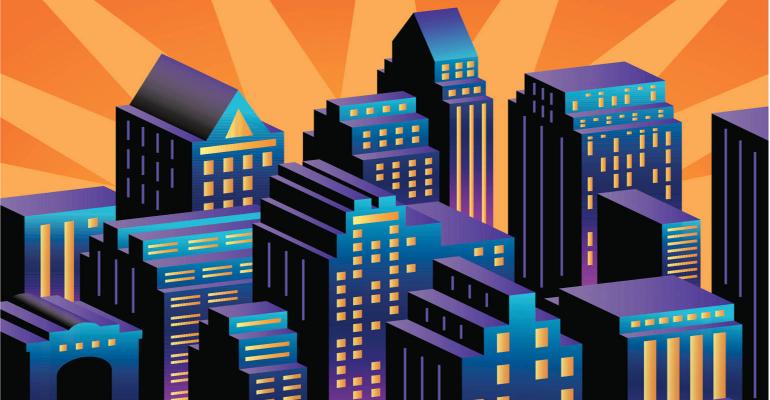 Is the Speculative Office Development Pipeline Going to Cause a Problem?

As a percentage of rentable area under construction, speculative office development this year is at the highest percentage CoStar has seen over 13 years.

Speculative office construction—as a percentage of supply underway—is expected to be at the highest level it has been in years in 2018, according to commercial real estate data firm CoStar.

Still, some experts say there is enough demand out there for new, quality space—even as the national vacancy rate has not seen a significant drop since 2010, and there is an uptick in expected deliveries this year.

As a percentage of rentable area under construction, speculative office development this year is at 40 percent, totaling 49 million sq. ft. of supply underway. That’s the highest percentage CoStar has seen over 13 years, and it is 200 basis points higher than the previous yearly high recorded in 2007, which saw 69 million sq. ft. of speculative development. The figure has gradually trended upward in recent years—2017 saw 50 million sq. ft. of speculative construction, roughly 37 percent of the total—as after the recession most of the new office product was built-to-suit. “This is about as high as it historically gets,” says Hans Nordby, managing director at CoStar.

This growth in speculative development reflects the lack of new, high quality office space to lease—so developers are building it, Nordby says. Today, just 10 percent of office inventory is less than 10 years old, down from 19 percent in 2007.

Still, if the percentage of speculative development continues to grow, it could contribute to rising vacancy rates in the markets that have the most supply underway, Nordby says. While it is hard to point out anything that could negatively impact the economy in the short-term, he notes parts of the economy may appear overheated or volatile.

The national office vacancy rate in the fourth quarter averaged 16.4 percent, a 20-basis-point increase from the year prior and not a huge drop from the 17.6 percent high seen in 2010, according to real estate data firm Reis. According to Ten-X, an online real estate marketplace, vacancies in the third quarter of 2017 remained at 16.1 percent, unchanged over the year, but expected to rise to 18.3 percent in 2021 after a modeled recession from 2019-2020. Real estate services firm Transwestern’s fourth-quarter office report noted 31 quarters of positive absorption and a vacancy rate of 11.5 percent, a 10-year-low.

Rent growth in the office sector has also waned over the past five years to 1.5 percent in 2017, according to Ten-X. Reis found that asking and effective rents rose just 0.6 percent in the fourth quarter and 1.8 percent year-over-year, which is the weakest rent growth since the recovery started in 2011. Ten-X anticipates that office rents will increase by 2.0 percent this year, but will contract by 2.5 percent over the next two years, following a modeled recession from 2019-2020.

Peter Muoio, chief economist at Ten-X, says he is not as concerned about too much speculative supply as much as overall supply in the markets that recovered well after the recession—typically, gateway cities including New York and San Francisco that have been seeing growing economies, an influx of capital and strong office job growth. The latest office sector report from Marcus & Millichap, a real estate services firm, notes that more than half of all deliveries expected this year will be in 10 markets.

On a national level, the new supply pipeline does not look extreme relative to past cycles, but these “hotter” markets are seeing more supply compared to the markets that lagged—and continue to lag--during the recovery. “I really think supply has overrun absorption,” Muoio says.

Consider San Francisco. The city, which saw vacancy of 9.8 percent vacancy in the third quarter, is expecting 4.5 million sq. ft. of new office supply this year. “We’ve never seen that much supply to the market in a single year,” Muoio says. During through the tech boom in the 1990s, there was only one year—1999—when the city experienced 4.0 million sq. ft. of absorption. “It’s just a digestion issue,” Muoio says.

Many industry experts feel the office sector is quite strong at the moment. This is because scheduled deliveries of new product this year will be roughly on par with previous years and there is still strong demand for office space—particularly new space.

“Here’s the thing, if you cannot buy it, you build it,” wrote Jim Costello, senior vice president with research firm Real Capital Analytics (RCA), in an email. RCA data shows that the amount of capital entering office construction appears to be nearing a high—the third quarter of 2017 saw $12 billion in starts and the fourth quarter saw just under $14 billion in completions—but the pace is expected to decelerate temporarily. Over the near term, construction completions are expected to pull back, as it had been more difficult to obtain a construction loan once the high volatility commercial real estate (HVCRE) regulations kicked in about three years ago. However, this period of tightening underwriting standards for construction loans is ending as the regulations have become better understood, Costello notes.

Marcus & Millichap is forecasting 79 million sq. ft. of office completions in 2018—a “relatively fractional” rise in deliveries from 2017 that represents just 1 percent of total office inventory, says Al Pontius, senior vice president and national director of specialty divisions at the firm. It also falls far short of cyclical peaks delivered in 2001 and 2008.

Marcus & Millichap also anticipates a little over 79.6 million sq. ft. in absorption. “That’s a pretty good balance between absorption and completion, which would imply the vacancy rate will stay on a national basis somewhat similar, probably drop a little bit,” Pontius says.

Reis is also forecasting an uptick in office construction in 2018. But economic optimism generated by tax reform could trigger a boost in leasing, says Barbara Byrne Denham, a senior economist at the firm. “Over the last year and a half, people put off leasing decisions until they had a little more certainty in the economy,” Denham says. “I think some firms will step up and finally make some decisions on office leasing.”

It’s this optimism that Chicago-based Baker Development Corp. is leaning on as it wraps up construction on 2017 N. Mendell, a 62,000 sq. ft. speculative office development in the city’s Lincoln Yard’s neighborhood. The Chicago area saw a burst of speculative project starts about two to three years ago, says Daniel Slack, a principal at Baker Development. “Everyone’s waiting to see how that’s absorbed,” Slack says. And as absorption picks up, tax reform and relaxed regulations could trigger even more deals. “That might spark some additional speculative development and demand,” he adds.

Ryan Tharp, director of research at Transwestern’s Dallas office, also is seeing a wait-and-see mentality when it comes to speculative construction in his region. In Dallas, for example, there had been a push of speculative construction, as employers looked outside of the densely populated downtown. Now, developers are taking a beat. “It’s a time to take a breath, reflect,” Tharp says. “Are we still filling up the buildings we constructed last year and this year?”

He doesn’t expect this pause to last long. Once projects are delivered and absorbed, developers on the sidelines will jump back in. “They don’t want to sit there twiddling their thumbs, that’s for sure,” he notes. “They love to build.”

Baker Development’s project, a ground-up renovation of a 100-year-old industrial building, is set to be delivered this spring. Baker Development found the opportunity attractive given the location’s proximity to public transportation and young talent. “There just wasn’t anything in the neighborhood for corporations to locate [to] and capture what’s a pretty captive audience from an employee standpoint,” Slack says. So far, no leases have been signed for the building. However, it has seen a “phenomenal response” from prospective tenants, including several proposals that would each take up half the building, Slack says.

This flight to quality—even if the absolute amount of speculative construction overall is roughly on par with previous years—raises a different question, says Heidi Learner, chief economist at real estate services firm Savills Studley. “The market has definitely been stronger for higher quality, new construction,” Learner says. “The question is, what happens to the older product?”

Older buildings may appeal to companies looking for space that they can afford, Pontius says. Still, many companies in competition for top talent—such as the technology firms in Silicon Valley—will pay higher rents for premium, new space to attract the best workers.

Not everyone is confident that the demand is there for all the office product. Ten-X, in a recent report on the office sector, argues that despite the growth in employment in the country, demand remains “lackluster,” as technology and workstyle changes have cut the amount of office space needed per worker by a third.

Tharp insists that many developers have learned from the past in terms of building product that no one wants. At this point in the cycle, a developer would not want to be left sitting with an empty building. “They’re being more cautious of what they’re building,” he says.