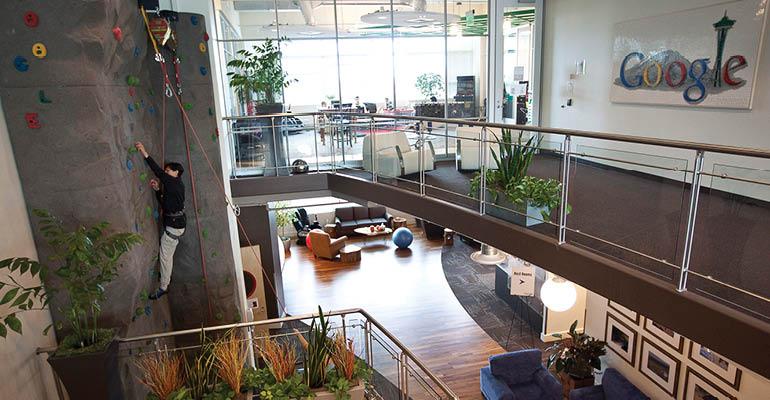 Employers are attracted to suburban office markets because rents for class-A space there tend to be nearly half those of central business districts (CBDs).&nbsp;

While urban office markets continue to be popular with Millennials, employers, including technology companies, are luring young talent to the suburbs with creative office campuses that provide lots of amenities, along with the greater housing affordability, industry insiders say. “Movement to corporate office campuses is the biggest trend we’ve seen over the past few years, with tech firms consolidating or expanding into new campuses,” says Stephen Newbold, who heads national research for real estate services firm Colliers International.

Silicon Valley firms, including Google, Facebook and Apple, have headquarters at sprawling corporate campuses with gyms, chefs preparing organic food and massage services on-site. The rationale for everyone under one roof is the idea that it fosters positive employee morale, productivity and innovation, notes Newbold. While noting that it’s difficult to define creative space, he adds that “there is a general trend by all occupants to use space more creatively. Part of that is to fit the work demographic to the space and consolidate or use space more efficiently.”

Employers are attracted to suburban office markets because rents for class-A space there tend to be nearly half those of central business districts (CBDs) at $29.13 per sq. ft., compared to $45.90 per sq. ft., according to Colliers’s fourth quarter 2016 Office Market Outlook Report. Improvement in suburban office markets goes hand-in-hand with growth in residential development, Newbold points out, noting that the combination is spawning urban-type markets outside CBDs.

Meanwhile, continued rent growth in CBDs has slowed space absorption there, as tenants downsize to control costs. “The majority of transactions in CBDS are renewals,” Newbold says. As a result, suburban office markets now account for the greatest share of office absorption, according to the Colliers report.

To some extent, the multifamily sector is driving suburban office employment growth. “We’re seeing a big demographic shift, with the Millennial population creating demand for suburban apartments,” Newbold says. Another factor, he notes, is that once Millennials have a family, the quality of neighborhood schools becomes important, and suburbs tend to have the best schools.

“What will be interesting to see is as rents rise and a changing differential between owning and renting takes shape, if homeownership increases,” he adds, pointing out that pressure on rents in places like the District of Columbia and northern Virginia has already made it cheaper to buy than rent.

But despite a flat vacancy rate, New York’s office market remained strong throughout 2016, with the second-highest annual leasing total in the past decade. In addition, the San Francisco Bay Area remains the tightest of the top 10 office markets with a 5.6 percent overall vacancy rate, and vacancy as low as 2.0 percent in the Silicon Valley markets.

Rents remained strong in the top U.S. office markets in the fourth quarter, with half of the markets tracked by Colliers continuing to see growth in rates. However, a cyclical slowdown is expected, with more than half of U.S. markets experiencing an increase in vacancy.

Vacancy is not expected to rise rapidly, but with an estimated 91 million sq. ft. of new office space under construction nationally, demand may not be able keep pace with deliveries in 2017, according to the Colliers report. But with the construction pipeline heavily front-loaded, deliveries will likely ease by 2018.

Newbold notes that suburban properties do present a slightly higher risk than urban class-A properties, which hold up well in down cycles. But despite slowing growth, the Colliers report predicts further upside for the U.S. office market. While the market overall will move forward at a slower pace, economic growth anticipated in 2017 will provide a bump in office occupancy.

Office tenants are not abandoning downtowns, but they are balancing the desire to be located near highly qualified, young professionals who prefer urban living with the limited availability of large blocks of space in urban cores, Newbold adds, noting that developers are looking for ways to provide the best of both worlds.

For example, he cites 801 S Broadway in Santa Monica, Calif., which is at the heart of the Los Angeles Westside’s Silicon Beach and home to media producers and related firms. This 2.7-acre, 955,561-sq.-ft. office campus, which is near public rail transit, downtown Santa Monica, the beach and new residential product, is being redeveloped to creative space.