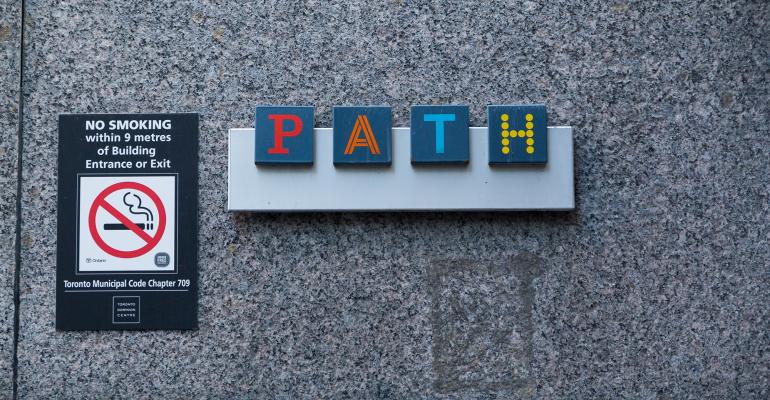 The trouble facing the PATH is an acute version of what’s ahead for all commercial hubs that thrive on a concentration of activity.

(Bloomberg) -- To get an idea of the long recovery ahead for Toronto’s financial district, take a walk through the vast subterranean pathways that connect the city’s skyscrapers.

Covid-19 has turned the food court under the Brookfield Place office complex into a ghost town. Single chairs sit at empty tables, passenger-less escalators climb desultorily upward, and the click, click, click of a woman’s heels is all that can be heard in what is normally a cacophony.

A pedestrians walks downstairs in Brookfield Place in the financial district of Toronto, Ontario, Canada, on Friday, May 22, 2020. Whether the PATH, a subterranean network that provides connections between major commuter stations, over 80 properties, including the headquarters of Canada's five largest banks, and 1,200 retail spots, can return to its glory days will depend initially on how quickly Bay St. firms return workers to their offices.

“It’s depressing,” said Subway franchise owner Ani, who declined to give his last name. Just one customer showed up in the first 15 minutes of lunch hour on a recent week day. “I feel horrible like everyone else. I miss the business. I miss the customers.”

In the years leading to 2020 B.C. (Before Covid), some 250,000 people a day would descend into the PATH to shop or grab a bite in the more than 30 kilometers (19 miles) of halls and subterranean plazas that snake under North America’s second-largest financial district. But as banks sketch out plans for an eventual return to their offices, the future looks a lot more bleak for the network below.

The trouble facing the PATH is an acute version of what’s ahead for all commercial hubs that thrive on a concentration of activity. What was once a strength for brick-and-mortar merchants -- being in the heart of an area where hundreds of thousands of people work and shop -- has been transformed into a weakness.

For starters, it’s unclear how quickly workers will be returning to the skyscrapers above. On Friday, Toronto Mayor John Tory announced two dozen major employers had agreed to keep most of their downtown staff at home at least until September.

But even when they do trickle back to the financial hub known as Bay Street -- Toronto’s equivalent of Wall Street -- the indoor PATH faces the added Covid-era challenges of relatively narrow halls, “pinch points” prone to pedestrian congestion and little access to fresh air.

Whether the PATH, a subterranean network that provides connections between major commuter stations, over 80 properties, including the headquarters of Canada's five largest banks, and 1,200 retail spots, can return to its glory days will depend initially on how quickly Bay St. firms return workers to their offices.

“The PATH is in for some deep trouble,” said Bruce Winder, an independent retail analyst. Minimal traffic, small spaces and high rents is “a very bad formula.” He expects bankruptcies among smaller businesses, with some of the bigger chains remaining shut until people return in larger numbers. Already, women’s wear retailer Reitmans Canada Ltd. and footwear chain Aldo Group Inc., which both have a presence in the PATH, have filed for creditor protection.

The subterranean system is a big component of the area’s “ecosystem,” said Diane J. Brisebois, who heads the Retail Council of Canada. “It is part and parcel of the lifestyle of the financial district, where one needs the other.”

The network provides connections between major commuter stations, more than 80 properties including the headquarters of Canada’s five largest banks and 1,200 retail spots. It is popular because it offers shelter from Toronto’s freezing winters and humid summers. The PATH also links to the Scotiabank Arena, which is home of the Toronto Raptors and Maple Leafs, tourist attractions like the Hockey Hall of Fame, and the city’s flagship Eaton Centre shopping mall, currently mostly shuttered.

An office-building boom had further fueled activity in the warrens below, which are moving south toward Lake Ontario. For some the PATH was already overwhelming: Woe betide anyone walking against the waves of early-morning investment bankers, brokers and baristas pouring out of Union Station, the main transport hub for a region of more than 6 million people.

More workers were set to arrive. Among major North American cities, Toronto has the most commercial construction under way by square footage in its core this year after New York, according to CoStar Group Inc.

Whether the PATH can return to its glory days will depend initially on how quickly Bay Street firms return workers to their offices.

“It’s going to be a gradual but steady climb back to normalcy,” predicts Sal Iacono, executive vice-president of operations for Cadillac Fairview, landlord for downtown complexes including the TD Centre and RBC Centre.

Toronto-based Canadian Imperial Bank of Commerce is a case in point. “We’ll be following local guidance, but for our team we’ll go at a much more gradual pace that works for us,” said Sandy Sharman, who oversees human resources at Canada’s fifth-largest bank. “In all likelihood the majority of people working offsite today will continue to do so for an extended period of time.”

Meanwhile, plans are under way to make the return to the underground less daunting for the office crowd. The Toronto Financial District Business Improvement Area, which helps coordinate policies for companies with interests in the PATH, is proposing stanchions and decals in the narrowest passages to keep pedestrians to the right, in single file and at least three stairs apart.

“It’s a giant learning experiment for all of us, quite honestly,” said Grant Humes, the association’s executive director, though he’s optimistic people will adapt. “We’re all like rats in the lab on this one.”

Ani, the Subway franchise owner, says he’s not going to wait forever for Bay Street’s denizens to reappear. “I’ll give the keys away,” he says. “I’m not going to pay C$15,000 every month when there’s no business.”

To contact the editors responsible for this story:
Derek Decloet at [email protected]
Jacqueline Thorpe