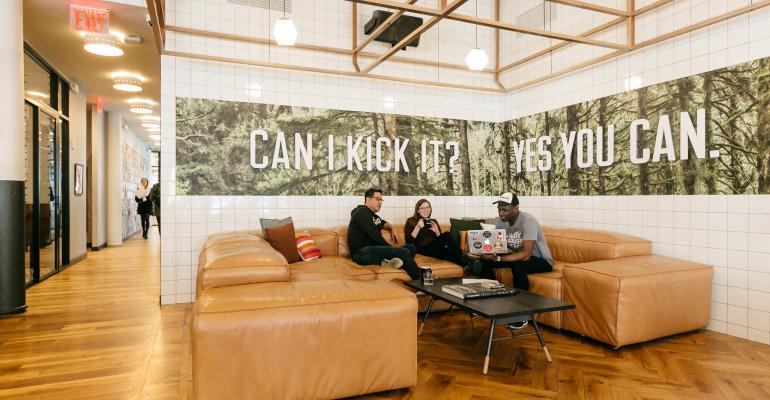 The company has backed out of a project at Third Avenue and Lenora Street in Seattle.

(Bloomberg)—WeWork has backed out of an ambitious project to outfit a 36-story tower in Seattle with co-working space and its co-living offshoot, as the company looks to shore up its finances.

WeWork won’t lease the building at Third Avenue and Lenora Street from Martin Selig Real Estate, according to a joint statement from the companies Monday. The decision leaves one of Seattle’s biggest office landlords without a tenant just as a major new project is nearing completion.

“As part of WeWork’s commitment to refocus on its core business, WeWork and Martin Selig Real Estate have mutually agreed to not move forward with the planned WeWork-WeLive Belltown Seattle project,” the companies said.

The building was once a symbol of the ambition of WeWork’s parent We Co. When the deal was announced in 2017, it was the largest deal WeWork had done by square footage and also an early effort to expand its communal-living business. Twenty-three of the floors were slated to be occupied by WeLive.

As recently as September, WeWork appeared to be headed toward a rich valuation in its public debut before investors balked over concerns about the venture’s governance and mounting losses. The firm ended up ousting its chief executive officer and postponing the offering. The delay has left it scrambling to raise new funds.

WeWork’s bankers are pitching investors on a roughly $5 billion financing package that would be one of the riskiest junk-debt offerings in recent years.

The company’s leaders aim to turn around the office-sharing venture with emergency borrowing, even if it’s expensive, rather than watching early backers’ equity and influence diminished in a rescue by SoftBank Group Corp., its largest shareholder.

WeWork is still planning to open a location in another Martin Selig Real Estate building in Seattle’s Ballard neighborhood. The Puget Sound Business Journal previously reported on the arrangements.